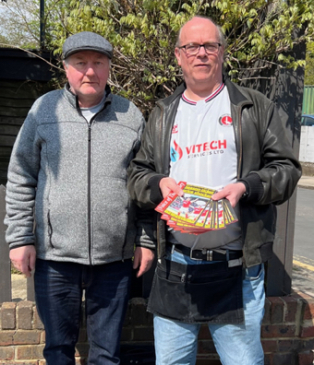 Once more for luck: VOTV sellers Dom Matthews and editor Rick Everitt in Floyd Road back in April

The final print issue of Voice of The Valley will be sold in SE7 for the first time at Charlton's home game with Oxford United on Saturday, October 1st. This is later than originally planned because of the sheer scale of the issue, as well as the announcemment of a Royal Mail strike in the run-up to the original sale date.

VOTV176 will also be the largest in the fanzine's 34-year history, as a special double issue brings the curtain down on a publication which began when Lennie Lawrence's team were battling for First Division survival at Selhurst Park.

As well as all contributions from the regulars, the last issue will celebrate the 30th anniversary of Charlton's return to The Valley and look back at VOTV's own history, as well as the club's, since it first hit the streets in January 1988.

Work is now under way on VOTV176, which will be available to order here shortly. But please note that due to the weight of this issue it will have to be sent as a large letter at roughly twice the usual postage, and in additon to higher production costs this will unfortunately have to be reflected in the price for individual orders online.

Subscribers will receive the issue as normal if they have paid for two issues this season. We have updated the PayPal system in order that 1) subscriptions which ran out over the summer will be charged for the final issue and then be cancelled automatically; 2) subscribers who had overpaid have now been refunded the difference, where possible, and then cancelled and 3) subscribers who have paid for one issue this season will be set to top up and then finish.

There are a few PayPal subscribers who cannot be refunded via the system mechanism because their last subscription was more than six months ago, while others have paid by cheque or bank transfer and these will be tidied up by individual contact during August. We advise subcribers to wait to hear from us, but if you would prefer further information in the meantime, please email sales@votvonline.com. We may not be able to reply immediately.

Finally, thanks to the many people who have been in touch to say how much they will miss their monthly VOTV. Us too. But we can confirm that this website will continue to publish new material for the foreseeable future, including the long-running Airman Brown's Diary, so rest assured that we intend to be here long after September.