Aussie businessman Andrew Muir (white shirt and scarf) is tipped to become Charlton's new chairman, with Gerard Murphy (next to him in blue shirt) as chief executive. Paul Elliott (next but one) would be vice chairman

Are we nearly there yet? Aussies break cover

It was a night when Charlton’s immediate future may have been revealed, but not in the way the Sky cameras and excited crowd had anticipated.

The Addicks’ 1-0 first-leg play-off semi-final defeat by Shrewsbury Town was another kick in the stomach to a set of fans who have endured serial misery over the four years and four months of Roland Duchatelet’s ownership of the club.

This was not the end of Charlton’s promotion ambitions, with the second leg to follow on Sunday evening, but it was hardly an encouraging start.

A crowd of under 15,000 also served as a reasonable gauge of the damage done to the club under successive ownerships. Eight years ago, there had been 21,000 at the same stage for Swindon Town, although they brought more than the Shrews’ 777.

Yet an alternative focus, before and after the game, was on the appearance – more than a year after their interest was first revealed by Mail Online – of Duchatelet’s potential Australian successors.

Here, finally, was businessman Andrew Muir, whose involvement was exclusively revealed on the cover of Voice of The Valley way back in August last year, months before anyone else but the Mail - once in April 2017 - would even report discussions were under way.

Before the game, Muir was in the Valley Superstore, chatting to fans. Soon he was being shown around by former player Paul Elliott, who we have consistently tipped to be involved in the new set-up.

Seated with them at the front of the Valley directors box was the Australian sports business consultant Gerard Murphy, named in original Mail story and consistently in the background of discussions ever since.

It was quite clearly the behaviour of people wanting to send a message, staking a claim. When asked they gave little away, except the impression they were planning to be in charge next season and wanted to repair the relationship with the fans.

Separately, Voice of The Valley was told by a very credible independent source that a deal is ready to be signed and that could be done as soon as today, but formal legal completion would take a little longer. We already knew that a series of meetings had taken place in the last fortnight.

In response to overnight speculation that the deal involves leasing The Valley and Sparrows Lane, I have been assured this morning by one former director that they have still had no contact from the Australians.

That is potentially key, because no new leases can be entered into without the individual approval of each of seven men, including current director Richard Murray, who are collectively owed £7m.

It cannot be ruled out, but either any incoming owner settles the £7m liability or they cannot enter into leases. And without leases or full ownership of the freehold assets they cannot sensibly buy the club.

If that issue remains to be resolved then a deal may still be further off than it appeared last night, with a second party still in the game.

However, at present everything points to the Australians. I have also been told that Duchatelet has had a clause inserted in the deal that prevents former chief executive Peter Varney and other ex-employees on the non-football side serving on the board or in senior roles.

That ties up with a story we heard in recent weeks that Varney’s imagined involvement had become a stumbling block, alongside a promotion bonus for Duchatelet.

In fact, the delusion that a return to the ancien regime was anyone’s motivation for protests against the incompetent Belgian management has always been the product of a paranoid element in the Duchatelet camp which never understood the nature of football support.

It would serve the club well to mend fences and draw on available experience, but that can be done in a variety of ways as it has been in the past. Money and status is the current directors' obsession, not their opponents'. A fresh start is what’s needed and that surely demands removing the poisonous and discredited Murray from any position of influence.

By all means give him an impressive-sounding title and a directors' box seat for life. His historical involvement absolutely merits that. But as cheerleader and apologist for two disastrous regimes, he surely cannot be trusted to engage constructively or usefully with a third.

The rest of us will be content just to be able to buy a season ticket again.

Are we nearly there yet? Let’s hope so. There have been several false dawns and we admit responsibility for some of them, although only ever in good faith. There have been many twists and turns along the way. Nobody in the mainstream media even tried to chart them.

As for the team, which ought to be the priority at least until this weekend is over, caretaker boss Lee Bowyer has emerged from the last two months with huge credit, whatever happens on Sunday.

It does not appear that he will be Charlton’s manager next season, but that may well be his choice more than that of new owners. It is a subject for another day. But let’s hope he will have two more games in charge, regardless. 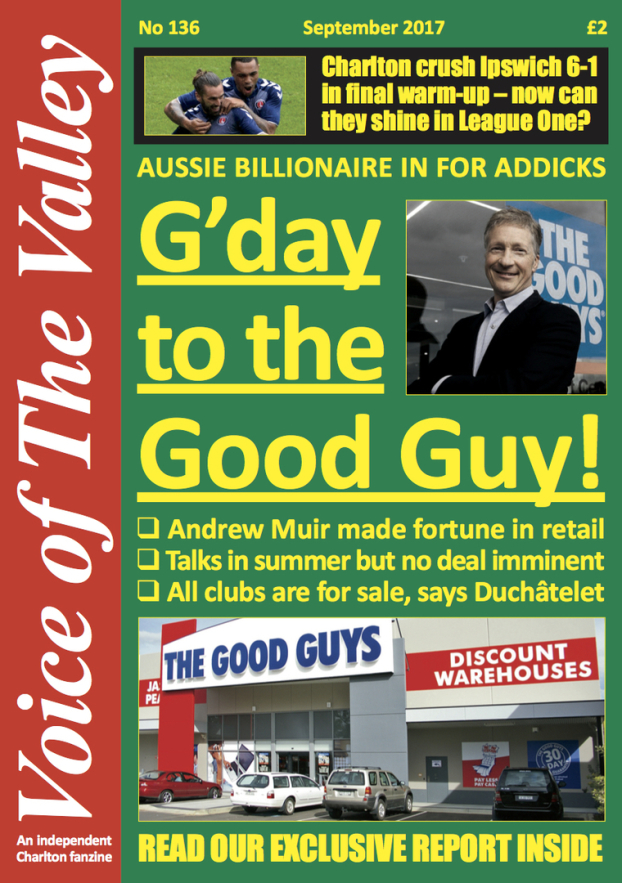