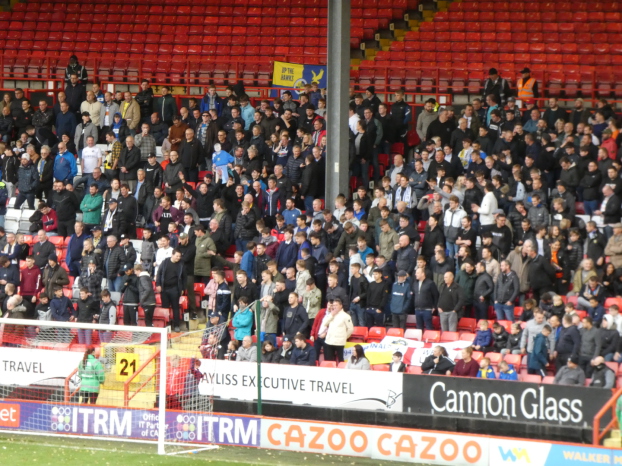 Up for the cup! Havant & Waterlooville fans at The Valley in November

It can be the cup that cheers again at last

Is this the year the FA Cup regains some of its lost lustre for Addicks fans? Chris Powell’s painful quarter-final exit at Bramall Lane in 2014 – from both the competition and the manager’s job­ - has turned out to herald a long miserable spell in the knockout format.

Of course, it’s been a largely dismal time for Charlton on most other fronts too. But unlike the league, the cup hasn’t even had its moments of joy. In fact, it’s arguable that it played a part in helping the next two managers to lead an Addicks team in it out of the door too.

In January 2015, Bob Peeters survived just one more match after the Addicks were beaten at home by fellow Championship side Blackburn Rovers in the third round.

Twelve months later, it was the hapless Karel Fraeye who oversaw a notorious defeat at League One Colchester United. He too lasted one more game, but it was claimed that he left the Essex venue in a laundry basket as fans vented their fury about the running of the club.

Following the team's relegation Russell Slade actually won his only FA Cup tie as boss, a first-round Valley clash with Scunthorpe United in November the same year, but he too was out after the next match. Karl Robinson was in charge by the time the Addicks lost to his former club MK Dons in a second-round replay at Stadium MK.

We don’t want to worry Johnnie Jackson unnecessarily, but it could be argued there is a bit of a pattern here. The sequence was broken in 2017/18, however, when Robinson’s Addicks beat Truro City at The Valley, before going out at AFC Wimbledon in December.

But Robinson too was long gone before Lee Bowyer’s side demolished League Two Mansfield Town 5-0 at The Valley in 2018/19, albeit in a replay, then rolled over in familiar fashion for Doncaster Rovers at The Valley in the second round.

Bowyer’s curious attitude to the cup was underlined by his statement that we weren’t going to win it anyway, an argument which could be applied by most clubs to most competitions in most seasons, even if we understood he had other priorities. Play-off final success the same season was pretty good compensation, to be fair.

A 1-0 home defeat by West Bromwich Albion in 2020, a week before a second 2-2 Championship draw with the same high-flying opposition, underlined his view. A single-goal exit to Plymouth Argyle, later held 2-2 in SE7 and trounced 6-0 at Home Park, did so again last season.

Last term’s action took place in an empty Valley, of course, but the club has done its best to minimise attendance anyway since 2014 by closing the majority of the ground for home ties, while Bowyer was hardly the first to field a weakened side.

If Charlton keep putting up large signs saying it is not taking the FA Cup seriously, they can hardly be surprised when few turn up. Many clubs close individual stands; few, if any, push it to the extremes Charlton have, deliberately creating congestion at the few turnstiles that are open. It actually costs the home club less to open stands than it does in the league, because the receipts are shared net of such costs.

Even the 2013/14 competition was largely a low-key affair, except for that thrilling win over Sheffield Wednesday at Hillsborough in the fifth round. You have to go back to the visit to Fulham, in 2012, and Tottenham Hotspur a year earlier, to find more significant opposition.

That’s one reason why this year could be the one that reignites the flame, which isn’t to take Friday’s second-round tie at National League North outfut Gateshead for granted.  A live ITV4 audience will mostly be tuning in hoping for an upset and we're all too long in the tooth not to realise that's possible. But if the Addicks do get through, the third-round draw will be awaited with some anticipation.

Charlton have not been drawn against top-flight opposition at The Valley since they faced Middlesbrough in the sixth round as a Premier League club themselves in 2006. Alan Curbishley was still in charge then. That’s how long ago it was.

Given that the FA Cup, more than any other knockout competition, thrives on giantkilling, it’s no surprise the trophy’s been tarnished in the average Addick’s imagination by this long, low-key spell.

For older fans, however, it was often the big cup ties that were the highlight of the season. Supporters of a certain age can reel them off, and if they too often ended in defeat until that night at Blackburn Rovers in 1994, they were often fantastic occasions, with much larger than average crowds.

As for caretaker Jackson, he won’t want to add his name to that of Phil Parkinson as the only Addicks boss to go out of the competition to non-league opposition in the century since the club joined the Football League (at Northwich Victoria in 2009). A win won't hurt his claim to the permanent job, either, although in my view further delay in appointing him serves no useful purpose anyway.

Handily placed in fifth spot in the sixth tier, with games in hand on the teams around them, Gateshead will relish their own moment in the spotlight and rightly so.

Beat them and opportunity knocks in turn for Charlton – not to win the trophy for the first time since 1947, maybe, but with the luck of the draw to set up a special afternoon at The Valley. And we don't know how much other promise the season will still hold by then.

If the club wants to capture the imagination of new and returning fans, this would  be a good way to do it. They might even let the rest of us sit in our regular seats.