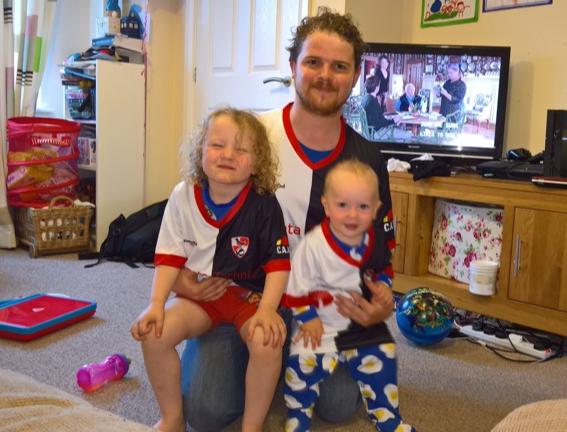 Family affair: Will Bollen is an active supporter of the protests at Charlton - despite living in Manchester

"Why are you STILL here, Katrien?" - a question Charlton say you are not allowed to ask

Ahead of ‘free speech day’ at The Valley on Saturday, the Coalition Against Roland Duchatelet (CARD) has encouraged supporters to create their own banners for the occasion.

But what’s it like to make your own banner? MATT WRIGHT spoke to one supporter, Will Bollen, who has made a series of effective banners for previous games - and had one inoffensive banner taken from him at the last home match against Coventry City - about his creative process and the key lessons he has learned.

“I suppose the main reason why I wanted to make a banner was to channel my frustration towards how things are being destroyed at The Valley,” he said. “I first got the idea after seeing a picture of some Aston Villa fans holding up a banner against Alex McLeish. It was simple, not sweary, and straight to the point.

“I looked at getting one printed, but felt this would potentially diminish the personal element to the banner, so I decided to make it myself.”

After buying a standard bedsheet (£4.99 from either Argos or Wilkinsons) and three tester-sized pots of paint, one Charlton red and two black (£1 each), he was ready to go.

“With my first banner I had four options that I had written out (make sure you write it down first to practice). I had “Roland out”, “Meire out”, “We want our Charlton back” and “Roland and Katrien… we love CHARLTON, we HATE you”. The last one was just frustration, but turned out to be the most powerful and personal.”

The banner took an evening for Bollen to create – and led to his first important lesson.

“Rule one: make sure you put some tarpaulin or a waterproof sheet underneath when you are painting, not newspaper! You will regret it otherwise. I had Roland and Katrien written on my kitchen floor for about three days afterwards.

“Otherwise, patience and good music is the key. As long as you have that and you follow what you are going to do from the start, you’ll get it done in no time.”

Bollen took his first banner to Sheffield Wednesday away, and after just 20 minutes was asked to take it down by Owls’ stewards. It stayed the course behind the goal at Bolton, while at Burnley it was photographed and tweeted by the South London Press.

“For the latest banner I let Twitter decide the design,” said Will, who ran a poll with four choices:

“They were a bit more wordy, but I thought all four would be powerful,” he said.

The second option, “Why are you still here”, ultimately won the vote. But it made only a brief appearance at the Coventry game before it was asked to be removed because it was offensive.

“How was it offensive? I’ve no idea,” said Will. “I deliberately didn’t include any swearing.

“It clearly annoyed the senior management team, so it justified the time and money and lack of sleep it took to make it. That made every sleep-deprived second worth it. I'm already planning my next one and the one after that.”

Bollen is no stranger to doing his bit to encourage Duchatelet to sell the club. He is a regular volunteer for CARD, even though he lives in Manchester.

Indeed, for the #ProtestForAFiver match in late February, he took a six-hour overnight MegaBus from his home in Manchester on a Friday night in order to arrive at The Valley in time to help, one of five such trips Bollen has made to contribute to the protests.

“My first match I went to see was a Coca-Cola Cup tie at The Valley to see Charlton play Ipswich in the late 90s,” he said. “We lost 1-0, but I was hooked.

“Even though I wasn’t born in Charlton I felt a connection. Living in the Isle of Man it was hard to get a chance to see games, but whenever the opportunity arose to see them play up north my dad would take my brother and I.

“Now I fear that my kids won’t have a team to support. Poor decisions have reduced the quality of the team and made the fans feel further away and less connected to the team. We have an owner who constantly reminds us he has invested in the club, but it's not an investment if he’s driving us further into the ground with interest on the debt.

“I think the regime used to think that all this would just go away. I think they failed to realise the power of Charlton fans - just look back to when they took back The Valley. I think they’re realising it now, though.”

He added: “I have taken part in the protests as much as I can. It’s difficult living in Manchester, so I wear black and white during games, don’t buy anything from the club, take part in all the Twitter-storms and so on.

“When I volunteer for CARD, I feel proud to be standing there on Ransom Road in the freezing cold to give out the unofficial programme, or help arrange people during a sit-down protest, or whatever they’re doing. I feel proud to be associated with everything they have done.

“I only hope that, when my daughter and son grow up, a Charlton Athletic still exists and they can feel as proud of this club as I once did.” 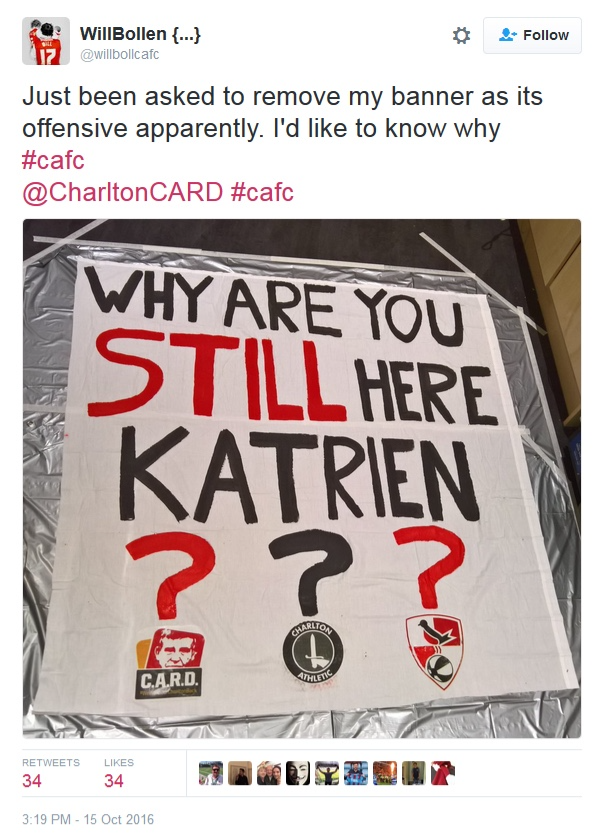 Is this banner offensive? The current Charlton regime claim it is