Sheffield steal won it for Blades 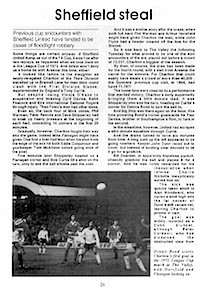 The story as reported in VOTV36

Some things are certain anyway. If Sheffield United dump us out of the FA Cup, it won’t be after two replays, as happened when we took them on in the League Cup of 1972. And defeat won’t deny us a home tie with Arsenal this time, either!

It looked like lambs to the slaughter as newly-relegated Charlton of the Third Division travelled up to Bramall Lane for their third-round clash with the First Division Blades, masterminded by England's Tony Currie.

But despite losing Vinnie O‘Kane to suspension and missing Cyril Davies, Keith Peacock and Eire international Eamonn Rogers through injury, Theo Foley's men had other ideas.

Even so, the back four of Mick Jones, Phil Warman, Peter Reeves and Dave Shipperley had to soak up heavy pressure at the beginning of each half, conceding 10 corners in the first 20 minutes.

Gradually, however, Charlton fought their way into the game. Indeed Mike Flanagan might have given Charlton a first-half lead when his shot from the edge of the box hit both Eddie Colquhoun and goalkeeper Tom McAlister before going wide of the post.

Five minutes later Shipperley headed on a Flanagan corner and Bob Curtis hit a shot on the turn, only to see the ball whistle past the post.

And it was a similar story after the break, when both full-back Phil Warman and Arthur Horsfield might have given Charlton the lead, while John Flynn had a header cleared off the line for the Blades.

So it was back to The Valley the following Tuesday for what proved to be one of the epic encounters of the era, played out before a crowd of 13,037, Charlton’s biggest of the season.

By then, of course, the draw had been made for the fourth round, with a visit from Arsenal the carrot for the winners. For Charlton that could easily have meant a crowd of more than 40,000 - the Gunners’ previous cup visit, in 1956, had lured 71,767!

The home fans were cheered by a performance that merited victory, Charlton's early superiority bringing them a 30th-minute lead. It was Shipperley who was the hero, heading on Curtis's corner for Dennis Bond to turn the ball in.

And big Ship was there again on the hour, this time powering Bond's corner goalwards for Paul Davies, brother of Southampton's Ron, to turn in the second.

In the meantime, however, United had scraped a 48th-minute equaliser through Currie. And the drama turned to farce six minutes from time. A long punt up the left appeared to be going nowhere. Keeper John Dunn raced out to cover, but instead of booting clear decided to let it go for a goalkick.

Bill Dearden, in apparently hopeless pursuit, cheekily grabbed the ball and placed it for a corner. And he was richly rewarded for his insouciance when referee Charlie Nicholls inexplicably waved him on. The kick was quickly taken short to Alan Woodward, who curled a shot high into the far corner of Dunn’s still vacant net, leaving Charlton to protest in vain.

The goal was widely reported as a Dunn blunder, although the Kentish Independent’s Peter Cordwell, who had disdained the obstructed view from the new press box to compile his report from elsewhere in the stand, insisted the fault lay with the referee.

But it was little enough consolation for Charlton. Their misery was compounded when extra-time, marked by two miraculous saves from Dunn, ended goalless and the toss for the second replay came down with Bramall Lane as the venue.

So it was back to Sheffield 13 days later, and ultimately disappointment. United were more dominant this time, but still could not get past an inspirational Shipperley. On the one occasion that they did, Warman was there to clear Flynn’s shot off the line.

And as the game wore on, Charlton began to create chances of their own. Arthur Horsfield and Keith Peacock both went close, and that most rare of goalscorers Peter Reeves also beat McAlister with a shot, but saw it drift lust wide.

Once more the 90 minutes ended without a winner. And in extra-time Charlton had looked likely to take their top flight opponents back to The Valley for a third replay.
But again tragedy was to strike them at the death. And once more it was a disputed goal that did the damage, with Dearden at the centre of the controversy.

There were just 60 seconds left when the centre-forward burst through the middle and shot the ball past Dunn from 20 yards. But immediately the linesman raised his flag for an infringement. He was instantly surrounded by angry United players, who were waved away by referee Dave Wallace. But whatever the mystery offence, it carried no weight with Mr Wallace. After a cursory word with his linesman, he simply turned to indicate a goal.

After 330 minutes, Charlton were out and a share of the receipts from the three games, which had an aggregate crowd of less than 37,000, was little consolation for missing out on a visit from Arsenal.

Notably - for all you cynics out there, not to mention those in Middlesbrough [a jibe aimed at Lennie Lawrence, who had made comments about Boro’s size relative to Charlton’s] - the biggest of the three Sheffield gates was that at The Valley.

Reflected a whimsical Foley later: "l can't remember feeling as proud as I was when I walked into the dressing room at Sheffield. Strange, you may think, but the performance of the players in the three games has given me great satisfaction.
‘Life itself is not fair at times, but In the end those with character and the will to win come out on top.’

It was not the first time that Sheffield United had deflated Charlton's cup hopes. Five and half years earlier, it had been the third round of the far more glamorous FA Cup in which the sides met.

A healthy crowd of 24,919 assembled on a wet afternoon at The Valley to see if Charlton could lower Division One colours for the first time since leaving the top flight themselves ten years earlier.

Naturally, they were in for a disappointment. And once again the referee, in this case the highly respected Norman Burtenshaw, would play his part.

Having been managed by former Chelsea defender Johnny Harris since 1959, United would tumble out of the First Division the following year. But in 1967 they were destined to finish a respectable tenth, one point and one place above their Sheffield rivals, Wednesday.

Charlton, on the other hand, were occupying their by now traditional slot in the lower reaches of the Second Division, and would eventually finish 15th.
In his last few months at The Valley, the Addlcks star was right-back Billy Bonds.

“Every time Billy surged forward with the ball, there arose a thunderous roar from the crowd,” wrote sports editor Harold Deacon in the following Friday's Kentlsh Independent.

And it was Bonds who created the easiest scoring opportunity of the game, midway through the first half. But Peter Burridge got too far under Bonds’ cross and headed over the bar.

Charlie Wright had to make a brilliant save from United centre forward Mick Jones, while at the other end Harry Gregory carved out an opportunity for Alan Campbell, but the young inside-left just failed to connect.

The deadlock was broken on the hour. Right-winger Woodward, who had just had a similar centre cut out by Peter Reeves, sent over a low cross which Wright dived to intercept but missed. Jones had the simplest of tasks to tap the ball home.

Yet Charlton should have been level within a minute. A close-range Colin Appleton header beat veteran keeper Alan Hodgkinson but was handled off the line by a defender. Mysteriously, referee Burtenshaw awarded a free-kick to Sheffield United!

Shortly afterwards there was another curious incident when Peter Reeves headed the ball into his own net, but play was called back, apparently for offside.

Turning on the pressure, Charlton were unlucky when a Gregory cross eluded Hodgkinson and flashed across the face of the goal with no forward in range to provide a conclusive touch.

Concluded Deacon: "United’s covering in defence was the decisive factor, full-backs Len Badger and Bernard Shaw making precious few mistakes. In tackling, too, United had that extra speed that made all the difference, even though it was over-robust at times.

“On a dry ground, however, the result might have been different. Slightly built Keith Peacock and Alan Campbell showed no relish for the heavy going.”

There are no entries yet.