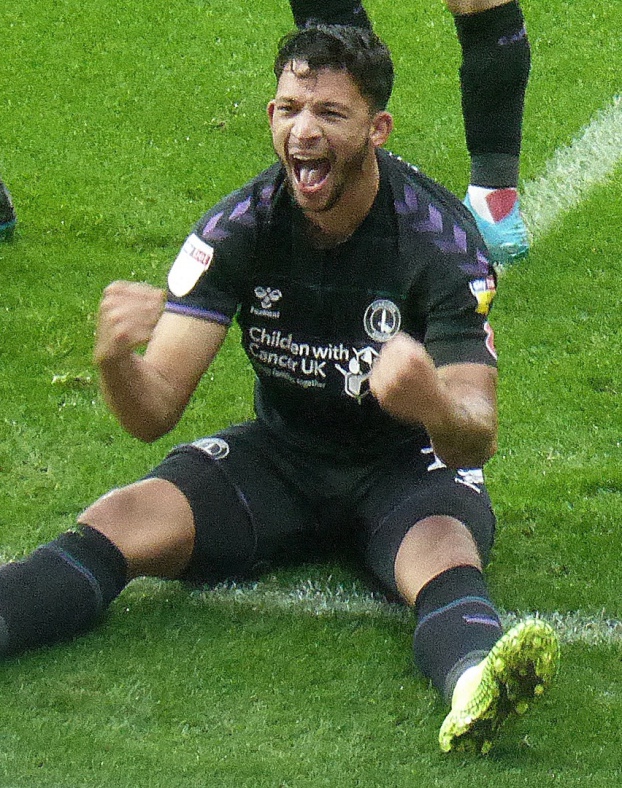 End game for the Addicks – and not just at Leeds

Justice was done at The Valley on Saturday when Macauley Bonne fired home Charlton’s 93rd-minute equaliser against Wigan Athletic, breathing new life into the embers of hope for the Addicks’ Championship survival.

Right now, the two clubs share more than the traditional desperation of the scramble to avoid relegation. Each set of players, staff and fans has been badly let down by remote and ridiculous owners.

Wigan looked to have escaped trouble before they were plunged into administration and a mandatory 12-point deduction by recent buyers in the murkiest of circumstances.
Charlton were always likely to struggle under the dead hand of Roland Duchatelet, while his successors proved more interested in helping themselves than the club they took over.

But defeat for Lee Bowyer’s team would have been harsh, not just on the basis of this display but over all of their eight games since the season resumed in June.

It has not been pretty. Bonne’s 11th goal of the season* was only the Addicks’ sixth in 11 matches. At times it has been painful. Birmingham’s 93rd-minute equaliser had denied  Charlton a midweek win that would have taken away all the tension. But it has been brave and committed, and it deserves to be enough.

Often Dillon Phillips has been the hero. On Saturday the display was illuminated, again, by the talent of 20-year-old Alfie Doughty, whose splendid 11th-minute leveller provided the spark of quality that kept his teammates in the game.

Whether it is enough we will only discover on Wednesday, when Charlton’s likely status may be decided in Wigan, Brentford or conceivably Luton, rather than at Elland Road where they take on champions Leeds United. Anything less than victory leaves the Addicks dependent on others.

Yet whether Charlton will play in the EFL at all next season remains far from certain.
On Friday justice was also being done, more literally, in Manchester. There former executive chairman and continuing East Street Investments minority shareholder Matt Southall conceded in court that he had acted unlawfully in changing the latter company’s registered directors and registered office at Companies House a week earlier and was handed a £21,000 bill to cover third-party legal costs for his pains.

If Southall’s purpose had been, as his lawyer seemed to suggest, to highlight that the latest pretenders to ownership, notionally headed up by the insubstantial Paul Elliott, had not really assumed control then it was a rather expensive way to state the obvious.

After all, that was also what Charlton have been telling the EFL, as they must to comply with the rules regarding change of ownership, having been asked exactly that question in a recent letter by the league. The special Valley Review produced last month makes the same point, deleting all the previous directors from the official list but not inserting any new ones.

This, however, is so much nonsense. A business must legally be controlled by its own board of directors, which is why the incumbents have been reinstated at Companies House. Tahnoon Nimer and Southall still own the club through ESI, at least in as much as they ever did. The statement on the club website that “East Street Investments were taken over by a consortium led by businessman Paul Elliott on June 10th 2020” was and is a lie.

It’s a sign of the tangled web being woven here that just a week ago Charlton also posted on their website regarding the unauthorised change of ESI directors: “The club is investigating the matter and will take the necessary action.”

No reasonable person could argue that it is the responsibility of the football club to correct the registration details of its parent company and if club decisions are being taken by the senior staff then they would have no jurisdiction anyway.

The spider in this particular web appears to be Chris Farnell, formerly Southall’s lawyer, recently Nimer’s, and now apparently representing Elliott. Perhaps lawyers, like toilet paper, were in short supply during the Covid-19 emergency.

It was Farnell who issued statements about the Companies House changes in the name of Claudio Florica, an ESI and Charlton director since March who is himself no stranger to the courtroom, albeit in his native Romania and not as an advocate.

Unlike Elliott, Farnell brings football experience to the table, although it would be hugely optimistic to take encouragement from his previous involvement in controversial takeovers at Leeds, Swansea and, most recently, poor expelled Bury. The phrase “legal eagle” has unfortunate connotations at The Valley, but another bird of prey could usefully be inserted.

Southall and Farnell appear to have fallen out rather badly and perhaps the former fears that just as he garnered unwarranted acclaim as the anti-Duchatelet at the turn of the year, so fans will now rally to Farnell as the available antidote to his own toxicity.

In fact, the recent evidence at Charlton has been that one brand of shyster often succeeds another, a consistency matched only by the warm welcome that each receive from a clutch of reliable stooges in the directors’ box.

Six weeks after the takeover that never was, officials are still waiting for the puff of white smoke that would signal the required approval for it from the football authorities, with the lingering suspicion that the whole exercise has principally been one of procrastination.

There’s no telling what further damage may have been done in the meantime, but anyone signing up for a season ticket on present information from the club would seem to have an appetite for fairy stories that would normally put them in the U11 pricing category.

Someone appears to have topping up club funds to pay the wages in May and June, but for what motive and on what terms is anyone’s guess.

If Charlton do stay up on Wednesday, perhaps a buyer will appear from behind the curtain, but even then they will still have to show the EFL proof of funds believed to be in the region of £20m.

More to the point, they will need to sign up to pay Duchatelet in excess of £50m for assets that aren’t worth half that sum. Doing so wouldn’t be an encouraging portent in itself.

Should the EFL decline the invitation to collude in the continuing charade, however, the current owners of ESI are likely to be forced to sell Charlton Athletic or put it into administration, as the league surely cannot entertain the current chaos again in 2020/21.

The two local MPs, Matt Pennycook and Clive Efford, have each now weighed in with letters demanding answers from EFL chairman Rick Parry. They cannot be long in coming.

Former chief executive Peter Varney and investor Andrew Barclay remain ready to step in. They will only do so, however, once Duchatelet recognises that his existing deal to sell The Valley and Sparrows Lane to ESI is deader than the dodo.

If he won’t play ball and there isn’t an alternative buyer the club seems bound to end up in administration, which is likely to wipe out its obligations to him and mean the ex-directors get their £7m, but will undermine the team yet again.

At that point Bowyer would be entitled to feel he’s done his duty by the club and its fans, and who could blame him? Phillips, and others, may well take a similar view, whether Charlton go down or not.

So, while Wednesday evening will be another nail-biter for Addicks everywhere, its outcome is just one part of a bigger jigsaw.

Whatever the outcome on the pitch, it is probable that ESI has run out of road. If the EFL want their competition to have any greater integrity next season, they need to show Farnell and friends the door. And lock it securely behind them.

*Bonne did not appear to score the first one credited to him, against Leeds in September.

Voice of The Valley issue 160 will be published in August.