30 years ago: Charlton wound up 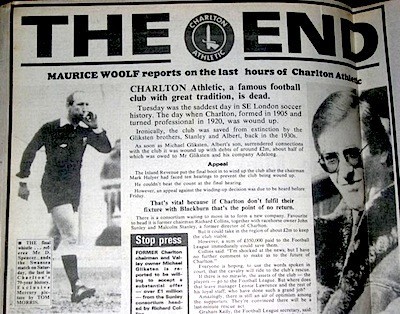 The Mercury reports the news of Charlton's apparent demise

Three decades ago, at the end of February 1984, Charlton Athletic faced oblivion, when a winding-up order was issued against the company in the High Court and the gates of The Valley were padlocked on the instructions of the Official Receiver.

For more than a week the club teetered on the brink of disaster, before a deal was struck with the club's creditors and a new company formed to allow the team to continue its Second Division fixtures.

In this adapted extract from his soon-to-be-republished book, Battle for The Valley, Rick Everitt remembers one of the most dramatic episodes in the club's history.