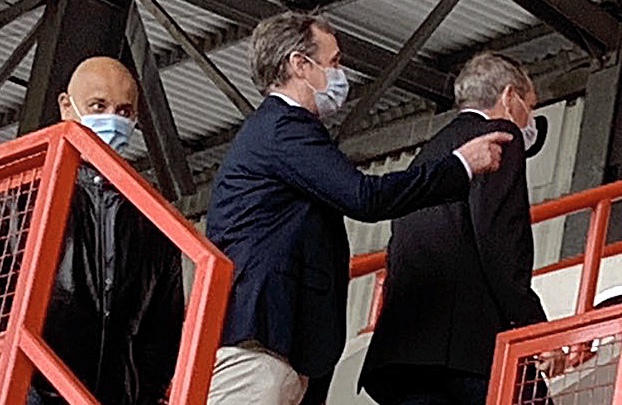 Stand back and give way to the man in black!

As the great Johnny Cash once said: “One of These Days I'm Gonna Sit Down and Talk to Paul.” Well, thanks to your open letter, proclaiming your newly found attachment to Charlton Athletic, Mr Elliott, that day has come.

I know as I write this, Paul, your letter hasn’t proved an overwhelming success among the fan base and that must be frustrating for you. The sad fact is a huge phalanx of Charlton supporters clearly wonders, while you may write as many open letters as you please, why you haven’t adopted a similar openness with regard to displaying the detail of your ambitions for the club?

Bearing in mind the effort and expense you have gone to in order to seek to freeze Thomas Sandgaard’s ongoing attempt to buy the club – you'd think this might represent highly visible proof that you intend to retain ownership? It has been pointed out often enough across various online platforms.

Perhaps, rather like your failure to actually supply the one-pound coin to seal your alleged ownership deal with East Street Investments, as was stated in court this past week, the oversight is merely an administrative issue (we’ll see that phrase again).

I have no idea if the widely held negative perception of the extent of your financial resources is fair or entirely unfounded, but neither can the wider Addick family and that is just part of your insurmountable problem.

You speculate in your own letter that “for some reason” fans have gravitated towards the negative when it comes to your reputation. Well, let me shine a little light on that for you.

For a start, your online profile does not look especially reassuring, with no tangible high value assets apparent and tales of your previous bankruptcy fairly easy to unearth.

Anecdotal accounts of your involvement in the purchase and contentious closure of a much-valued girl’s school in Darley Dale several years ago have been damaging, judging by the frequency of its mention by concerned Charlton fans.

You have also chosen to take up with one or two business associates who, even with a limited amount of web crawling and headline sifting, do not sit comfortably as prospective owners or advisers to our well-respected football club. So, with that, let’s move on to your association with Chris Farnell.

You know, I feel for Chris a little bit. He has clearly built up a successful legal business and, I assume, a fairly lucrative career as a sports lawyer. After all, how many of us have access to the phone number of a multi-millionaire Brazilian pastor when we need one?

But, regrettably, he has also forged associations with “an unfortunate list of clients”, as the esteemed editor of this very website has so diplomatically described it. Tales of historic connections to the likes of Matt Southall (we send our love by the way) and Massimo Cellino, both recognised as controversial figures by certain fan bases, does little to calm the nerves.

To add to your woes, Paul, you then of course proceeded to fail the EFL’s Owners’ and Directors’ Test (OADT) and, whether the public view of that procedure is accurate or not, most football fans across the country estimate that to be a very low bar to cross. To describe your rejection as an “administrative issue” does little to reassure – in fact quite the contrary.

Even more so when it appears Thomas Sandgaard, a man clearly motivated to acquire the club himself, seems poised to walk through the same OADT process (if the rumours are correct) and has even placed a year’s funding into an escrow account. That will constitute an eight-figure sum Paul, and such hard cash being laid down speaks volumes to the fan base, considering Charlton’s current trajectory.

A local MP Clive Efford recently took to stating in the House of Commons, no less, “some dubious characters have got involved with the club.”

Given he made these remarks a number of weeks after the public announcement of your takeover (and while, these days, there are plenty of potential options down The Valley he might have had in mind), it’s certainly understandable fans might speculate whether you and your partners were the intended focus of his comments.

Just look across the social media channels and examine the reaction that you, and Farnell, consistently provoke among Charlton fans. I’ve not witnessed so many expletives since the time Roy Keane accidentally bumped into Gordon Ramsey in a pub and spilt a tray of drinks over Sir Alex Ferguson. I jest, of course, Paul, but this is an overwhelmingly relevant observation.

You claim in your letter to have only the club’s best interests at heart and yet you can clearly see, as disappointing as that may be, you are just not desired as the owner of Charlton Athletic. So give it up, Paul.

You know well enough the fans are the lifeblood of any football club and you simply do not have them on your side. Not even close. Even your own letter cannot avoid alluding to that blatant and awkward fact. Many fans are boycotting buying their season tickets until you and your associates are no longer close to the ownership.

If you are indeed owed £500,000 and can demonstrate these “monies” (as you describe them) were used to fund the wellbeing and operation of CAFC in recent months then you naturally deserve to get that sum back even if, and I’m being brutally honest here, I have severe reservations over what your future intentions for the club might have been.

But, ironically, in Sandgaard, we have a man worth an estimated $500mn and who is the majority shareholder of a publicly traded medical devices business based in the US. Now that’s the kind of conspicuous Internet research you can put your faith in!

Thomas seems to have quite a proactive approach to getting deals done, so I assume you’ve already approached him, privately and discretely, and shown his team the necessary paperwork and invoices appropriate to your £500,000 plus investment.

Thomas has said, more than once, there is always a means of getting a deal done if the parties are in agreement. So I suspect there is a way of resolving any financial strains you may be under.

Call me a cynic but I do have a feeling your open letter is largely about the "optics" in truth: a way to publicly demonstrate your sincere commitment to, and interest in, Charlton Athletic. But that’s your right and entitlement.

However, Paul, if you do stand by your Trumpian mantra of “making Charlton Athletic great again”, I believe you’ll need to take a look at the cold, hard facts of the situation.

A substantially wealthy businessman from the US is energetically trying to purchase the club to give it as good a chance as possible for success on the pitch in 2020/21 and you are obstructing him via the courts. Time is of the essence.

Meanwhile your personal endeavour has slowed Sandgaard’s objectives and could easily turn out to be an increasingly expensive process for you personally – pursuing an affection that is emphatically unrequited.

Whatever may be claimed or asserted in a court of law, in the court of public opinion at least, you are just not entertained as a viable owner of Charlton Athletic Football Club. It would be folly to consider that this viewpoint could undergo the sea change required.

You know, Paul, it’s time to stand back and give way to the man in black.