Pompey joy: the Charlton players celebrate the third goal in front of visiting fans in yet another Fratton Park win

Charlton’s tenth win in 11 visits to Fratton Park – and their seventh in succession – defied more than statistical expectations. Coming off the back of an abysmal display three days earlier at Oxford United and thoroughly merited even before Portsmouth were reduced to ten men, it was a startling transformation and a credit to the players and manager.

As well placed as anyone to judge that were fellow Oxford fans Charlie Methven and Simon Lenagan, whose presence among the Charlton party in the Pompey directors’ box ought to persuade even the most sceptical reader that their similar vantage point at the Kassam Stadium in midweek was more than just a coincidence.

Lenagan, a former Oxford director and son of the ex-EFL and U’s chairman Ian Lenagan, is an actor and a current director of the holding company which owns Wigan Warriors rugby league club, where his father is the chairman.

He became a person of interest when it emerged that his name was included alongside the four recent staff appointments – manager Dean Holden, technical director Andy Scott, finance director Ed Warrick and chief operating officer Jim Rodwell - in documentation produced to encourage small investors to take a minor stake in Charlton via a Texas-based investment fund.

Former Sunderland executive Methven has previously claimed that his role was simply to recommend the four appointments after happening to meet club owner Thomas Sandgaard. Lenagan's inclusion in Texas, despite not previously being named by Charlton, would seem to establish the US connection.

In reality they are all part of a takeover bid that has been granted a period of exclusivity by Sandgaard while due diligence is carried out - and possibly while those behind it try to raise the money. A lack of transparency is not unusual in these circumstances, but the early discovery of newly established SE7 Partners, with Methven and Warrick as directors, put paid to the fiction.

Voice of The Valley then learned that the would-be contributors to a Texas investment fund looking to take a minor stake had been told that the price of an 80% holding in the club is £11.3m. And we can now reveal that £7m of that is for the equity, while the balance would be injected into the business as working capital.

With the club likely to run an operating loss of £6m a year in League One, such an injection on its own would barely touch the sides. Investors were told of the potential for draconian cost-cutting measures, including major savings on football spending, but there is unlikely to be any return on investment in CAFC Limited alone without a return to the Championship, at minimum.

It is unclear what would happen to loans of at least £12m that Sandgaard has made to the club since 2020 through his Clear Ocean Capital, on top of the £1.1m he paid to acquire it. Having taken the team backwards, however, he can hardly be expecting to make a profit.

For a takeover to proceed, those involved will need to satisfy the EFL of their personal credentials, as well as that they have enough funds to run the club in the medium term. There is no evidence this process is under way.

There may, of course, be a hidden wealthy backer behind the deal, but if that is the case it’s unclear why there would be a Texas investment fund scrambling to raise nickels and dimes to buy a minor part of a business that is a long way from being profitable. 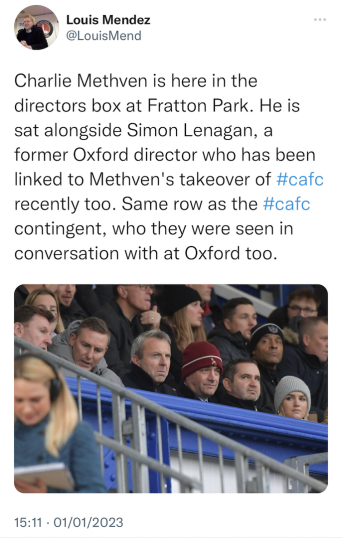 Beyond that lies the issue of The Valley and landlord Roland Duchatelet, whose involvement is now being managed through his son, Roddy.

The lease specifically waives the tenant’s statutory right to renew it beyond 2035 which would otherwise derive from the Landlord and Tenant Act 1954, although this does not preclude a mutually agreed extension.

The current chairman has guaranteed the lease commitments through his Sandgaard Holdings LLC, which means that entity would be liable if the club ceased to pay the rent or unilaterally walked away under anything except the break clauses or in 2035.

It seems likely therefore that Roddy Duchatelet will only assign the lease on a similarly favourable basis, whether that is Sandgaard continuing as guarantor or with a new one of similar financial standing.

According to former chief executive Peter Varney, who has been looking to put together a rival offer, Duchatelet will also insist on new owners agreeing to pay £50m to acquire The Valley and Sparrows Lane in due course before assigning the lease.

There can be no certainty that the terms set out in Texas will be those on which the final deal is done, but they do provide a handy guide to the direction of travel.

Fans would probably agree that the priority is a return to the Championship and be happy to align with a new owner achieving that, but it’s hard to see how that goal can be consistent with major cutbacks. Something doesn’t add up. 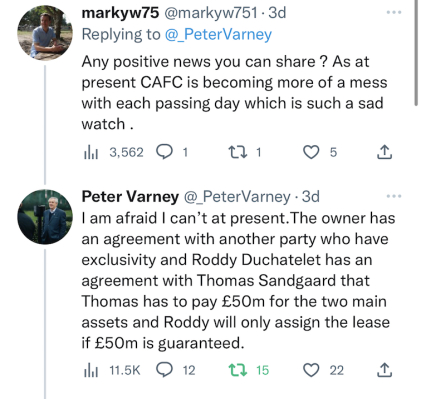