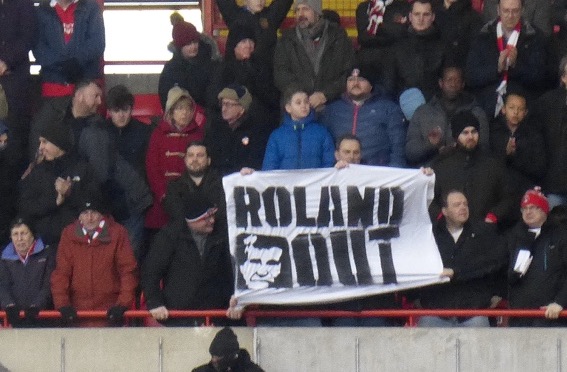 CARD's game won't be over in one afternoon

Another Charlton matchday looms, and with it another set of protests against the current regime at The Valley.

Among the more predictable outcomes - along with Charlton conceding a goal from a corner, starting well and falling apart, and the official attendance bearing no relation to the actual crowd - is a frenzy of debate on Charlton Life, Twitter and Facebook as to whether Coalition Against Roland Duchâtelet is doing enough. Or too much. Or if it should have done what it did earlier, later, or in a different way.

I am not speaking for CARD here, this is just my view, but as one of many involved in the planning and execution of various things that have been organised since the turn of the year, I think a little explanation might help.

Many of the ideas promoted on Charlton Life, in particular, have been debated at length at CARD meetings and in between them. The fact that some of the better ones haven’t been adopted yet doesn’t mean they won’t be. We understand that this provokes impatience in some quarters, but it just isn’t sensible to provide a running commentary for the club to monitor. Unlike them, however, our default is to be transparent when we can be.

Even after Reading’s visit on Saturday, there will still be six more home games left this season. This battle isn’t going to be won with a single decisive intervention. It’s a war of attrition and that means playing a longer game. But not, we agree, too long. And not just on matchdays.

CARD set out a red line early on, which unsurprisingly is about complying with the law. We’ve no intention of crossing that and anyone expecting us to do so is likely to be disappointed. To be very clear, however, Charlton’s ground regulations are not the law. Neither is it the police’s job to enforce them. It’s an important distinction.

In addition to that, we don’t condone or encourage illegal actions, but equally it’s for others to make their own choices and take whatever consequences are forthcoming. We’ve tried to provide some leadership, because we think that was missing, but this isn’t a military operation and we’re not in charge of what supporters do individually or collectively. We’re just offering a focus and a direction.

The biggest success that we’ve had to date is to put a national media spotlight on owner Duchâtelet and chief executive Katrien Meire and trounce them in the public arena. It’s likely to be that, more than anything, which led to the owner making his first public statements in two years and in so doing exposing the vacuous nature of his arguments, alongside those of his chief executive. That’s why a national newspaper now calls them clowns, and it's open season among the football pundits in general. The issues at Charlton are now being talked about in places where that wasn't happening before Christmas.

Obviously all the protests to date have been the right decision, as we have improved our position every time. But since we're not Meire, let's be honest and admit that some things have been more successful than others. That's inevitable.

We’ve talked at length about organising a walk-out of the Reading game and about other measures to impact on the match itself, but we’re conscious of the need to maintain a broad consensus of support. Given Charlton’s near-terminal league position, that calculation is changing weekly, but it seems likely that many people will walk out if the team struggles on Saturday anyway. Personally, I’d encourage that, but given the experience with the banners against Bristol City, it makes no sense to me to set a time that can then be overtaken by events on the pitch, especially given the nature of this crowd above all others.

In addition, the decision to televise the Middlesbrough match on March 13th live has opened up a whole new range of possibilities. It’s had a significant impact on our thinking about this weekend.

Nevertheless, before the end of Saturday you’ll hear about a raft of new CARD initiatives, all of which we expect to garner fresh media attention. The first will be revealed on Friday morning. We’ve not produced any more masks for Saturday, but we’ve got something else that we hope will help undermine the regime and spread the word. We could really do with some extra help distributing that before the match to the larger than usual crowd. There will be a great deal going on against Reading and if you can help us please contact CARD using charlton.card@yahoo.co.uk.

Then there’s the 5pm protest behind the west stand, where numbers matter more than anything. You might not think standing in the car park is effective, but it’s those images that have got the protest on to Sky Sports and Channel 5, and provided pictures for the local media. If you do nothing else, your presence there really does help.

It’s inevitable that what CARD does in the next few days won’t please everyone. You may disagree with the tactics we are adopting. Remember, though, that there are plenty of people working hard in different ways to ensure that there is a constant message out there that Duchâtelet must go. They are not the enemy, and neither for that matter are the Charlton fans who choose not to protest, or those who still live in hope the regime will have a personality transplant even at this late stage.

We really need to focus all our fire on the owner and his stooges. That way there might still be a better future for our club.