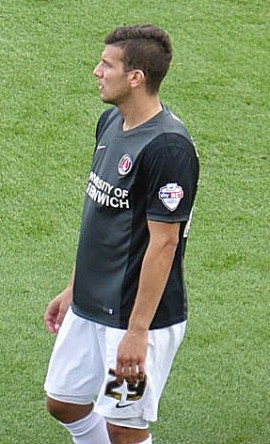 There was a question mark hanging over Charlton striker George Țucudean going into Tuesday night’s game with Derby County at The Valley - and it wasn’t about the special character that sits under the initial letter of his surname (writes Rick Everitt).

The 23-year-old Romanian had made the least positive impression of the seven outfield summer signings in the Addicks' opening three first-team matches.

Unfairly but inevitably, his one-on-one failure when put clean through by Jóhann Berg Guðmundsson's razor pass in the first-half at Brentford's Griffin Park had left a mark.

Unlike his new teammates he also appeared to be slow to react to the pace and physicality of the Championship, despite showing some neat first touches.

And after all he is the ultimate network signing, signed on a four-and-a-half-year contract to Standard Liège in January 2013 and loaned back to his former club Dinamo Bucharest last season when he failed to impress in Belgium.

Now owner Roland Duchâtelet had moved him on to Charlton on a contract with the same expiry date in an attempt to get some value out of the original deal, which he clearly wasn't going to get at Liège. He'd become the Addicks' problem instead.

But Țucudean blew a hole in that pessimistic interpretation in the first 45 minutes against the Rams, turning smartly inside the box to fire home Charlton's opener after 11 minutes and then making a second four minutes in first-half stoppage time.

His mazy central run may have confused referee Bull at least as much as the Derby defenders, who awarded a spot-kick even though the obvious foul on the Charlton striker was outside the box, but that did not detract from the panic he had caused in the visiting ranks.

The fact that Țucudean was unable to resume after the interval through injury only served to further underline the point that he had just made.

Tuesday's events may be just the confidence boost that a relatively young man performing in an unfamiliar league needed. Either way they will earn him more time to acclimatise in the eyes of the Addicks faithful.

Indeed, with the lack of height up front when replacement Franck Moussa is paired with Igor Vetokele, an evident problem after the break - and barring further activity in the transfer market this week - fans will be keen to see Țucudean resume at Huddersfield.

In truth, no set of signings is perfect and it would have been unrealistic to expect all the new players to be an instant success.

Duchâtelet and his head coach Peeters can be well satisfied, not just with the seven-point haul from the first three Championship games and the 4-0 trouncing of ten-man Colchester United of League One in the Capital One Cup, but with the style in which it has been done.

After a slightly unconvincing first half at Brentford and the disappointment of the late, deflected equaliser, the team and Peeters passed the apparent test posed by play-off failures Wigan Athletic and Derby with flying colours. The Valley is looking good too.

Doubtless the season won't be all plain sailing. The squad looks thin to mount a promotion challenge and Charlton have probably benefited from an element of surprise among their early opponents.

But nobody who saw Derby outclass the Addicks at Pride Park at the end of March would have expected the tables to be turned less than six months later.

There is a sense of excitement and anticipation around The Valley for the first time since the spring of 2012 and this time it is in a division where Charlton are not necessarily expected to compete for honours.

"Hope" is back and so is "entertainment" - and that's as much as any of us have a right to ask of a season with just three league games played.