Frustrated fans may send a message to Belgium 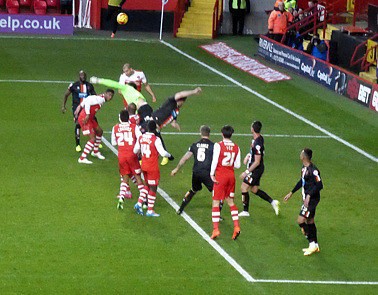 The boos that rang around The Valley after Charlton's sixth home draw of the season were a novel experience for Bob Peeters.

They were also a touch unfair on the Belgian head coach, whose side has been defeated just once in 11 Championship outings at The Valley, and then in somewhat unlucky circumstances. Peeters will know as well as anyone that the fact only four of those games have been won is less than satisfactory. And given that three of those victories were accomplished by September 13th their memory has already begun to fade.

Old Charlton hands had always seen the visit of bottom club Blackpool as a potential banana skin, especially as the Seasiders have shown some signs of revival under new boss Lee Clark. A three-game unbeaten run had culminated in their second victory of the season, over Clark's former club Birmingham City, at Bloomfield Road the previous week.

A draw was an easy pre-match prediction, but an untidy game was anything but predictable with Charlton's disappointment encapsulated by two errors. One was a weak punch by rookie goalkeeper Nick Pope that allowed the visitors to take the lead, the other a last-ditch schoolboy miss in front of goal by the generally excellent Andre Bikey, as the home side looked to rescue two squandered points. Moments earlier the defence had abandoned Pope to leave the keeper hopelessly exposed to Steven Davies's equalising header from a deep free-kick.

The fact that the drama came late was probably a big factor in the vocal response at the final whistle, but focusing on the individual errors only serves to mask a larger truth apparent for several months. Peeters, like Chris Powell before him, is not playing with a full deck. The sudden recall of Arsenal loanee Francis Coquelin, who featured in the Gunners' 4-1 defeat of Newcastle United a couple of hours later, was a factor in that against Blackpool.

Few will have arrived at The Valley expecting to find the indefatigable Chris Solly playing in midfield, where the absence of injured skipper Johnnie Jackson was conspicuous.
But equally the replacement of the busy Callum Harriott with George Tucudean on 72 minutes was inauspicious. Tucudean in fact set up Bikey's late trauma, but his introduction with the team 2-1 ahead appeared illogical. Had Charlton extended their lead by that stage then it might have been a prime opportunity for him to look for a confidence-boosting third goal in the Addicks colours. In the circumstances it looked ill-advised.

The afternoon did have its bright spots, including another solid display from 17-year-old Joe Gomez at right-back, even though his efforts to push forward in the second half were largely unsuccessful. There was also an intelligent and accomplished finish from Jordan Cousins to put the home side ahead in front of a sparsely occupied north stand, after Yoni Buyens had restored parity from the penalty spot before the break.

Still the sense of an opportunity being spurned persisted, not just around the game but over the season as a whole. Too much has been asked of leading scorer Igor Vetokele, he has seen a succession of partners or none, and it has long since infected his performances.

While the favourable comparison is with last season, when Powell had amassed just 19 points at this stage, an equally relevant statistic is the 29 the newly promoted Addicks had clocked up at the same juncture in 2012/13 - just one shy of Peeters' current total.
That is not to decry Peeters, who has largely made efficient use of the resources allowed him, or imply that the current record portends disaster. It doesn't. However, it is noteworthy that for all the early season optimism the team is currently little further forward than it was two years ago when it largely relied on the League One championship squad.

Powell, of course, was not given the opportunity to push on because of collapsing club finances, and the eventual ninth-placed finish was a credit to him that somehow seems to have been eclipsed in some memories by what followed.

Nobody can reasonably demand promotion or even the play-offs this time around and avoiding a relegation skirmish would be welcome of itself. But it would be of note if Peeters' team ultimately fails to match to the achievements of the sticking-plaster side of two years ago.

Unlike Powell, however, the Belgian has the advantage of an owner with significant resources to secure a brighter future. Roland Duchatelet's visits to The Valley may be even less frequent than those of his predecessors, but he is in a position to intervene if he chooses - and there have been substantial indications that he will.

The Duchatelet era is clearly still a work in progress. With the advent of the January transfer window we will learn more about how much progress in the short term that entails.