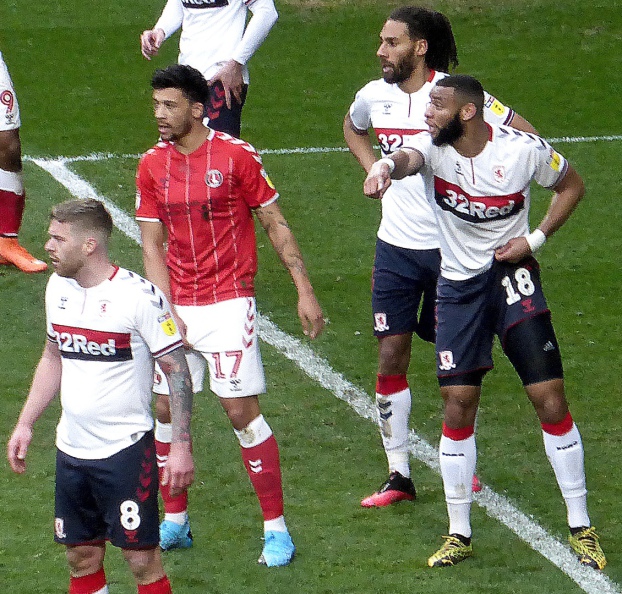 Fit for purpose: Charlton's Macauley Bonne (17) has played an unexpectedly full part in the Addicks' campaign

Heart-stopping concerns I recognise all too well

When Voice of The Valley's MATT WRIGHT heard that Macauley Bonne had announced he was missing international duty with Zimbabwe late last year because of medical concerns, he was well placed to understand the caution being exercised around the Charlton striker. He explained why in VOTV156, which was published on Boxing Day...

To look at Macauley Bonne, racing around up front for Charlton like Father Christmas with only an hour left before the world’s children wake up, the last thing you’d think is that he might have a heart problem. But then that’s exactly the danger.

In November, after being selected for the Zimbabwe national team, the striker suddenly announced on Twitter that he had been forced to pull out of international duty due to “unforeseen medical grounds”.

After undergoing heart scans, the 24-year-old was subsequently cleared to carry on playing.
But it must have been a scary experience, in the knowledge of what happened to former Premier League players Marc-Vivien Foé and Cheick Tioté, who both died from heart conditions after collapsing during games, and Bolton Wanderers’ midfielder Fabrice Muamba, who nearly died after suffering a cardiac arrest on the pitch during an FA Cup tie against Tottenham Hotspur in 2012, aged just 23.

And of course former Leyton Orient man Bonne would have been all too aware of the death of Justin Edinburgh: the forward joined the Addicks this summer just eight days after the 49-year-old O’s manager died due to a cardiac arrest.

After suffering a cardiac arrest myself 20 months ago, this is an area in which I now have a little knowledge.

Surprisingly, there was no coverage of the Bonne episode on Charlton’s official channels, either on the website or in the matchday programme, even after the all-clear was received.

This might suggest that Bonne was keen to keep things private. Or that even in the end days of the Duchâtelet regime, the pursuit of better and more transparent communication with supporters is likely to have to wait until the new owners take over.

The club did issue a statement to those journalists, like the South London Press’s Richard Cawley, who enquired further, saying: “The club’s medical team can confirm that Macauley Bonne underwent some planned cardiac investigations last week following a recent routine cardiac screen.

“The results of these investigations have been discussed with the sports cardiologist and the player will continue to play and train as normal.”

It went on: “The club will continue to regularly screen his heart as recommended, as we do with all our players from U15 through to the first team.”

These screening requirements, particularly for younger players, were increased by the Football Association in August 2018 following a study that found several players died of heart problems not spotted by tests.

A 20-year evaluation of the screening of 16-year-olds on the verge of professional careers, carried out by doctors who oversee the FA’s cardiac screening programme, showed that most died about seven years after a heart check that had showed no problem.

“What it told us firstly was that death rates were higher than had been anticipated and secondly that a one-off screening at the age of 16, which was what the FA were doing, is not enough,” said Sanjay Sharma, professor of inherited diseases and sports cardiology at St George’s University of London, who led the review.

“The death of a young athlete is highly tragic when one considers that most deaths are due to congenital electrical or structural diseases of the heart that are detectable during life.”
As a result, the FA increased the number of cardiac assessments young footballers are given from a solitary one at 16 to three at ages 16, 18 and 20.

The same year, Torquay United full-back Ryan Higgins was forced to retire rather than risk a heart attack. He had undergone tests after his sister collapsed and needed heart surgery.
She was later diagnosed with arrhythmogenic right ventricular dysplasia and so was Higgins. But, because its symptoms mimic the heart rate of elite athletes, it took four months for doctors to make their diagnosis – and it’s unlikely the condition would ever have been picked up by a medical.

Nowadays, players – and their hearts – are being constantly monitored. In addition to a global positioning system to track how far players run, how much they sprint and their speeds, the bra-like vest you often see them wear also contains apps that measure the physical and psychological stress felt by players based on factors such as oxygen consumption, maximum heart-rate and exertion.

I wasn’t wearing one of these when I suffered my cardiac arrest while taking part in a parkrun in Dartford (this is about the closest I’ll ever get to comparing myself to a professional footballer).

A study conducted by the National Institute for Health Research in 2017 showed that only around eight per cent of people who suffered an out-of-hospital cardiac arrest survived. But the survival rate increases to around 33 per cent if bystanders are able to provide assistance through cardiopulmonary resuscitation (CPR) and attach a defibrillator.

That was what happened at a home game in April 2014 when the life of a fan who had collapsed in the east stand was saved by a fellow supporter, who heroically stepped in to carry out CPR until stewards and medical staff arrived with a defibrillator.

Fortunately, also taking part in my parkrun was a nurse, who quickly came to my aid and performed CPR. I was doubly lucky because I collapsed close to the start, so I wasn’t far from where a defibrillator was stored. Someone raced to fetch it, and I was shocked back to life.

There was further fortune in the location for what my wife now refers to as “the incident”: it turns out a 26-acre park makes the perfect landing site for a helicopter, and Kent Air Ambulance was on the scene just 14 minutes after the race started to rush me to King’s College Hospital, one of the country’s leading centres for heart problems.

I spent the next few days in an induced coma, but within a fortnight – after the experts had run every test and failed to find anything “wrong” with my heart – I was discharged with my own personal defibrillator embedded in my chest.

In the short term, there was some unavoidable interruption to the social media activity of the Coalition Against Roland Duchâtelet – coincidentally, the guy who ran the Twitter account of Blackpool protest group Tangerine Knights suffered three heart attacks in 2018 and eventually had a successful triple bypass operation.

But just over a year-and-a-half later, the only real impact on my life is having to take regular, mild medication, a ban on “strenuous” exercise, and not being able to go through security X-ray machines.

Thankfully, as frustrating as deep-in-injury-time goals by Charlton’s opponents are, they don’t cause health implications.

For Bonne’s part, goals have been harder to come by in recent weeks, with one goal in eight games coinciding with the club’s worsening run of form as Charlton have slipped down the table.

But he has already had more action than might have been expected when he joined from Orient for an estimated £200,000 fee, Charlton’s major cash outlay under Duchâtelet last summer.

And five goals in his previous six matches was an impressive return for a player suddenly playing three leagues higher than he had been.

“I never expected to go straight in,” said Macauley, who hadn’t long finished asking his agent about potential loan moves prior to his first start against Leeds United in late September, but has found himself thrust into a leading role due to the absence of the injured Lyle Taylor.

“I’m 23 years old. I’m in the Championship. I’ve come from non-league – I’ve got to bite my tongue, wait, work hard. But I want to be playing games and scoring goals.”

The history books record that he has netted six times so far this season, even if his supposed first, the winner against Leeds, looked to many like it was a Stuart Dallas own goal.

But that he was in the right place, at the right time, to help force the ball into the back of the net nevertheless was a clear indication of the striker’s instinct Charlton fans have quickly recognised.

One more in a long list of astute signings by manager Lee Bowyer and head of recruitment Steve Gallen, it was later revealed that Gallen had been watching Bonne, who made his professional debut for Colchester United in 2013, for two years.

During that time he scored 49 goals for Orient, helping them to promotion, and he was considered as a replacement for Karlan Grant last January.

Now, according to the papers at least, Bonne is being scouted by Leicester City, Newcastle United and Fulham – although these recent stories were given impressively short shrift by Bowyer: “That’s his agent who has put that out there,” he told the SLP, dismissively.

It all seems like a long time ago that Bonne, who was born in Ipswich, was travelling to the likes of Dagenham & Redbridge and Dover Athletic. But that was actually only 12 months ago, and the forward must be relishing swapping those for a trip to Derby County this Christmas.

Destinations even further afield may still be on the cards for Bonne, who recently became the first Charlton player since Bradley Pritchard to be called up for Zimbabwe, even though he might have to wait a little longer.

Complications with getting a Zimbabwean passport earlier this year meant he missed out on competing for his country in the Africa Cup of Nations.

Those problems were resolved in time for him to play his first competitive game for the Warriors, who were facing Botswana and Zambia in quick succession in November, only for the health scare to intervene.

Zimbabwe are currently second in their Africa Cup of Nations qualifying group, but their next match, against group leaders Algeria, isn’t until August next year.

Copies of all this season's previous Voice of The Valley issues can be ordered here.