The value of knowing your audience 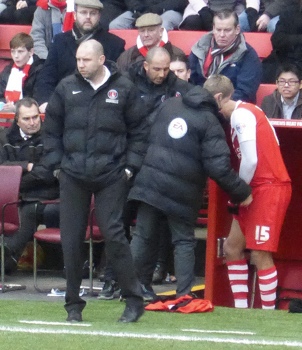 (author of The Charlton Men)

12/1/15: Let’s just pretend that we didn’t get up this morning and hear the news that Bob Peeters was sacked – for a few minutes and lines at least. Let’s go back instead to the cold Saturday afternoon of Bob’s 41st birthday, and a game against Brighton who have just appointed a very talented manager in the form of Chris Hughton. That is a man who, by his own admission, wants the Irish job a few years from now, when Martin O’Neill is ready to hand on the tenure.

Point is the guy has good pedigree – very much old school, a lot like his Irish teammate Paul McGrath (without the demons) in his playing days – quiet, competent, and allowing his football to do the talking. Such humility doesn’t always translate well into management in this day and age, when you seem to require the self-promotional skills of a used car salesman. That’s one reason why, despite a good record in helping teams punch above their weight at particular times in their history, he’s down in this division.

He has taken a demoralised bunch at Brighton, and got them playing again. Therefore if we were going to beat them on Saturday, we needed passion. Sadly, our players came out looking like they’d be happy to take the nil-nil draw and go back home to sip the last of the Christmas sherry in the warmth. Bob too seemed strangely subdued, at times, for a man on his birthday. Somebody in the west stand, about 20 minutes into the game, remarked that he had barely got off his seat, which is unusual for a man who at the very least stands up, and sometimes bounds about the sidelines, especially when opposing managers annoy him. Who can say they didn’t love his spat with Uwe Rosler in August?

Though we didn’t know much about Bob, I feel we warmed to him far more quickly than we ever did to José Riga in his solitary grey suit. Indeed some of us didn’t warm to José until the last days of last season, and by then it was too late – like the father figure in The Mike & The Mechanics song ‘The Living Years’. You know the one – just as you want to say ‘hey, I love you’ the old man’s gone. Along came Bob, exciting prospect, fresh blood, untested novice - or Dowie-like agent from Millwall, Duchâtelet yes-man, and whatever else we called him.

But many of us warmed to him, blaming every Belgian in the building aside from him for our current troubles on the pitch. Just like Chris Powell, and Riga too, he has a squad that’s as threadbare as the average drinks cabinet after Christmas. Against Blackburn, the first game of the New Year, we were down to the bare bones of the turkey. Even with the return of Rhoys Wiggins and the addition of Tony Watt, it still felt like we weren’t the full luncheon on Saturday.

So the vast majority weren’t calling for Bob’s head on a plate. Yes, there were rumours of dressing-room unrest, and the attitude of some players was worrying at the start, but the slide isn’t terminal – yet. In defence of the owners, it may well become so within a few weeks. But Bob was their man, the one they chose to replace Riga, who in turn replaced Powell, and they ought to have stuck by him – supported him with players who’d bring back the passion of early season.

The fact that they didn’t and have now fired him hardly fills the terraces with confidence.  Yet, I get a sense that there hasn’t been that much thought given to the mood of those on the terraces, past, present, or potential. For an owner with such an avowed passion for liberal politics, there is not so much of a sense of democracy and power of the people at The Valley these days. Though there have been excellent initiatives to improve the matchday experience and the infrastructure, the owners have possibly forgotten why people come to see football matches in Britain and Ireland. It’s because they want to watch their team play. It’s an experience more akin to going to the church than going to the cinema. We might love the comfy seats, but it’s the practice of our faith in supporting our team that is the most important thing. We want to feel that somehow we have a connection to owners, singing off the same hymn sheet, even if they’ll never sit in the north stand singing ‘Xy X’s red army’ .

But it wasn’t just the sacking of Bob Peeters that made me feel this way. It was something an awful lot less significant. On Saturday, February 28th, I will miss the game against Huddersfield – Powell’s return – and am possibly giving my ticket to a guy I work with – a young business teacher and consultant. He’s very clued up on marketing and that sort of thing. I’m sure he’s going to find it odd that for a game with such selling potential, we are offering tickets for a fiver.

There may be good reasons though, and it could be a very clever attempt to marry together the past and present – a generation of fans for whom Powell represents not just an all-too-brief spell in management but also three periods as a player – alongside those who represent a future fan base. David Golblatt in his recent publication talks about how the average fan that attended football matches in the 1980s was 20-something. Today the average age of football fans has reached the middle 40s. To survive in its present state, English football needs to reach a new demographic. We need to get younger people, more families, more minorities through the gates every weekend – so Football for a Fiver is a brilliant idea, and there may well be somebody up in the boardroom saying ‘February 28th, perfect day, return of a club legend. Great day for giving new fans a taste of the past, and showing them how we’ve moved on.’

That line of thought might be more convincing if it wasn’t for the sacking of Bob, without any real sense of why it happened, or what he has done so differently from what M Duchâtelet expected of a novice manager with a small squad.

But for the third time in less than a year, I’m going to have to give the owners the benefit of the doubt, because there is not much else I can do, and I have another 11 stubs of a season ticket to get through, as well as a trip up to Middlesbrough. Unless of course there’s another grand plan and the threads of this will all connect together on that afternoon of the 28th of February.

Remember Bobby Ewing in the shower in Dallas (not the actual scene – just what it represents) – we’ll all wake up and the last year has been just a dream. We still have Powell, the muddy pitch, and the scruffy seats bleached in the sun.

PS - Giant disclaimer before anybody gets irate – the last bit is a joke. The more serious matter that needs to be addressed is when we get a new manager, and who it is, and whether the club give a solid justification of the reasons why. When we’re in the bottom half of a division that features clubs with decent managers, such as Hughton, Gary Rowett, and others who are probably too irritating to list but decent all the same. We need somebody just as good to get us back up the table. That’s why I personally would have stuck with Bob for this season at least, unless some absolute travesty happened in the dressing room.

Yes, we were poor against Brighton for a large portion of the game, but even with the bounce of a new manager (if there’s such a thing) they weren’t any better than us, aside from getting two slices of luck and a dubious free-kick.

Maybe you agree, maybe you don’t. I can’t speak for anyone except myself, and I’m one of those people somewhere in the middle of the two groups of fans the owners seem interested in to varying degrees – the old loyal fan base, many of whom so easily identify with the ‘Since I was young’ campaign, and the new set of fans that they would like to attract with a shiny stadium, a good matchday experience, and I am guessing at the end of the day good results on the pitch too. It’s not that long since we seemed to have turned a corner and started getting those again, but maybe in modern football, two months is a very long time.

As WB Yeats said, “all is changed, changed utterly” – we’ll just have to see what is born out of it, I suppose. Roll on Rotherham and Steve Evans in a fortnight’s time! Hopefully by then we’ll have a manager who is staying with us for a while. I know, as I said earlier, football’s not the cinema but when you’ve paid for your ticket you’d like to have some idea of the film you’re going to see when you get inside the auditorium, and some sense the director’s thought about the audience.