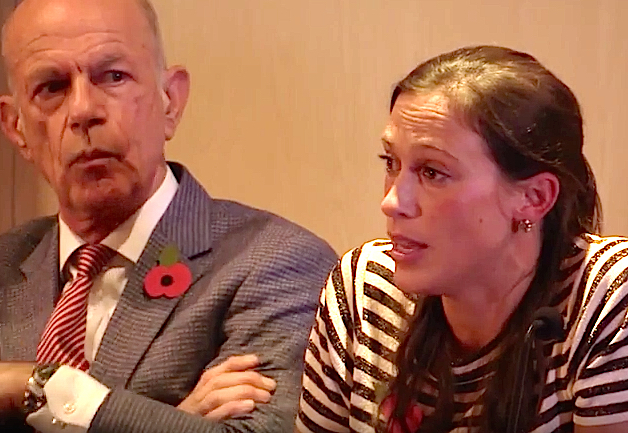 Clinging tightly to the hope that Saturday’s 3-1 win over Sheffield Wednesday has miraculously reversed the spiralling decline of the last two months, Charlton’s chief executive Katrien Meire set out on Tuesday night to describe a version of reality that many fans may struggle to recognise.

It is a world in which Valley icon Chris Powell and his former staff are embittered liars. It is not only sensible to employ five managers in 21 months, but the key decisions have been vindicated in each and every case. Fans’ disenchantment with the club, meanwhile, is driven by - or perhaps even confined to - a tiny negative minority.

Carefully selected figures were presented to show the extent of her benefactor Roland Duchatelet’s investment in the club, with little acknowledgement of how much of it has been squandered, or the actual performance of the team and business.

Reference by supporters to the massive customer service failure around season tickets at the start of the season was met with blank looks and the frankly crazy assertion that the club had asked fans to be patient around the installation of the new ticketing system.

As for an explanation of the club’s long-term strategy, it doesn’t appear to amount to much more than hope something turns up as players are sold to balance the books and thousands of additional supporters appear, apparently off the back of a series of gimmicks.

Tuesday night’s heavily stage-managed panel at The Valley wasn’t a hostile event and in a few quarters it may have done something to calm the public mood, although I wouldn’t bet on that extending to the end of the month unless “interim” head coach Karel Fraeye produces more points.

It at least showed some acknowledgement that there is a problem. At the end there were promises of increased fan engagement and a new Target 20,000 committee to look at ways to increase support. The trouble is that we have heard it all before. Indeed, Meire herself previously announced the Target 20,000 initiative at the Fans' Forum in September 2014.

The minutes to prove this are on the club website - unlike the ones from this October that the club had failed to post, adding to the confused communication that was a regular theme of the criticism from the invited audience. Again Meire did not know why - or even that there was a problem.

A new head of communications will apparently arrive in February, fully two and half years after the previous incumbent left. It is hard to escape the conclusion that in trying to drive down costs the regime has made the same mistake off the pitch as it has on it and left itself ill-equipped to manage day to day.

Since August the team’s trajectory has been sharply angled towards League One and the hint here from skipper Johnnie Jackson that Fraeye’s immediate predecessor Guy Luzon failed to adjust his plans tactically did not assist the credibility of Meire’s claim his appointment last January had been a success.

Luzon, like Jose Riga before him, did arrive in mid-season and avoid relegation, but no such argument can be made for Bob Peeters, who sat between them, yet apparently his appointment was yet another one vindicated by outcomes.

The stark truth is that almost two years on from the takeover, the club is spending more and performing worse, on and off the pitch. Its operating loss has increased. There are complaints from all directions about customer service, while management responds with initiatives - like Saturday’s house music DJ in the north stand bar - that appear to have been taken at random from a junior staff suggestion box.

More urgently, Charlton have fewer points after 16 games than in any recent Championship season, including the Pardew/Parkinson relegation campaign of 2008/09. Indeed, they are worse off, adjusting for three points for a win, than they were even when Andy Nelson’s team went down so dismally in 1979/80.

Driven to protesting about this in front of the west stand before the match against the Owls, fans are accused of behaving unacceptably, with Meire claiming that the club had provided a platform and that it had been abused. Unfortunately, as her predecessors at Charlton and counterparts across the country could tell her, it goes with the job.

She wasn’t abused on Tuesday, yet it was notable that when former VIP director Craig Norris invited her to draw on the considerable knowledge about the club and its supporters now outside the structure she quickly retreated into playing the victim.

The biggest impression left on me by the video of this event was not that Meire is cynical, but that she simply doesn’t get what Charlton's about or the scale of the challenge it faces just to stay in this division.

She is heavily in denial about what many supporters think is happening to their club and that this stretches well beyond last weekend's pre-match protestors. Until and unless she comes to terms with the fact it goes much deeper then both her and the supporters' frustration will continue to build.

Chairman Richard Murray made a valid point about the vacuum that now exists between club and fans, although it has to be said that he stood by and watched this open up as the previous regime stripped out deep layers of loyalty and experience, and with it part of the club’s identity.

That, as supporters' trust chair Steve Clarke suggested, had become the default setting at The Valley, which is what makes the current mess so painful and such a crisis.

It's not about any one individual or group of individuals, but the scale of the dislocation with the recent past and the practical evidence of failure by the people now in charge.

Fans do have a part to play in putting the club back together, but it’s not an absence of goodwill that is holding them back. They have been offering Meire help behind the scenes since she arrived.

It’s the regime’s inability to face up to its own shortcomings which is part of the problem. We have to hope that this is personal rather than structural, because without that it can’t expect to address them.