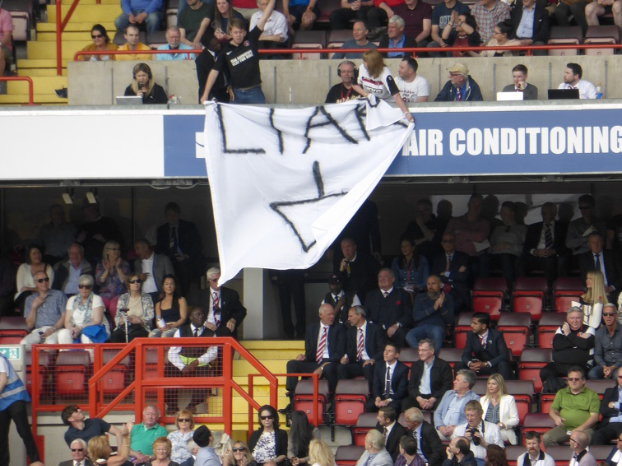 The trouble with Katrien Meire is that she’s out of control.

This seemed literally to be the case yesterday when she took centre stage, despite not being a platform speaker, at the Telegraph Business in Sport conference, blaming the media, the football authorities and the Charlton fans for a range of ills up to and including “criminal offences”.

Rarely can any public figure have demonstrated less self-awareness than a woman who stands up at a media event to declare that she’s been advised not to speak to the media and then does precisely that. Or more likely she knew very well what she was doing and decided that she would do whatever she liked anyway, because she can.

But what is it with this woman and conferences? Following the Dublin debacle last November, you'd have thought she might have learned her lesson. Apparently not.

The substantive point is that in a normal business, even a normal football club, the chief executive enjoys considerable autonomy, because that is the nature of the role. Yet they are also actively scrutinised by a board of directors against a range of key performance indicators.

That was true of all Charlton’s previous chief executives. Even if the board itself became dysfunctional and was slow to catch up with the worst of them, it still got there in the end.

In Meire’s case, there is no effective oversight because the only person able to call her to account is the largely absent Roland Duchatelet and in his world the obvious indicators - relegation, falling sales, declining commercial income, wasteful expenditure, resigning staff - do not seem to register.

Oddly for a man who is evidently keen to apply metrics to the game itself, the only business numbers that seem to concern him are the headcount of staff and cutting costs. He is also unusually dependent on his chief executive for information about what is going on.

A consequence is that Meire is apparently able to do as she likes, including her notoriously lax attitude to matchdays, relative disengagement from the day-to-day running of the business, promotion of favourites internally and a weird approach to relations with supporters. Oh, and a peculiar penchant for attending conferences. However, if she isn’t going to be scrutinised internally then it becomes all the more important for the health of the club that the spotlight is turned on her externally. And she can’t be allowed to paint a picture that misrepresents her own performance in the national media.

“We spend £30m in less than two years of ownership. And yes, we got it wrong with the managers and the players, but that happens, that’s why clubs get relegated, that doesn’t mean that everything else is shit.”

But it doesn't mean that it isn't, either. The reality is that the club has a long tradition of cheap season tickets, which the regime has maintained but compromised by a pricing structure so flawed that it has allowed people to buy the cheapest seat and sit in the most expensive one.

She and her patron do not deserve any fraction of the credit deservedly given to the Charlton Athletic Community Trust, within which, incidentally, the view of the regime running the football club is little different to that in the stands. Indeed if any Charlton employee past or present should take credit for the club’s community reputation it is the former chief executive Peter Varney, who set the trust up and supported it over many years. Yet he is a man that Meire does not know and will not meet, but is prepared to openly sneer about in the street.

Charlton have been relegated six previous times in my lifetime and to my recollection none of these have been accompanied by demonstrations of any kind, never mind protests that engage the majority of the crowd. It is simply dishonest to pretend that the unrest is only about relegation, even if the main person you are deceiving is yourself.

In practice, the club’s administration is a shambles, whether in terms of communication, ticketing or even its relationships with sponsors.

What about the complete failure to offer any kind of narrative through official communications as the club’s performances on the pitch deteriorated, or around the disastrous appointment and retention of Karel Fraeye? Or her claim that every change of manager from Chris Powell to Jose Riga to Bob Peeters to Guy Luzon to Karel Fraeye had been proven to be the right decision?

What about the disappearance of at least 1,500 season tickets last summer, and the pathetic attempts to blame Royal Mail; the closure of the ticket office to visitors two days a week to accommodate a public health call centre; the Crossbars fiasco; the sudden axing of the programme sellers; the sex video; the sofa; nonsensical away coach travel arrangements; and the house DJ? To use her own epithet, all these were indeed “shit”.

The reason they relate directly to the football failings is that all areas are suffering from a deficit of professional leadership - in short the comprehensive failure of Katrien Meire.

Ironically, even as yesterday’s events unfolded, another resignation was handed in at the club, with the departing female member of the commercial team, responsible for dealing with sponsors, apparently blaming a “lack of motivation from the top”.

It’s notable that when the club has done something well - the pitch, the new screen, the stadium access system and, hopefully, the training ground development - it has been by buying in third-party services. When something has to be delivered by Meire’s own staff appointments, by contrast, it seems to fail more often than not. That cannot be a coincidence. It speaks to a catastrophic failure of management.

When Meire then says that she wants to have more regular meetings with fans, it’s important to remember that over two years there were numerous efforts by a wide variety of supporters to establish just such a relationship, almost all of which she deferred and deflected. Either she was too busy personally fighting relegation or she tried to divert everyone, including one former director who still works voluntarily for the club, through the quarterly fans’ forum.

Even when she did sit down with the supporters’ trust to discuss a Target 20,000 committee, she said one thing to them and then did another, leading them to pull out. Wider meetings have been packed with irrelevant staff, captain Johnnie Jackson and even the community trust, or the fans have themselves been hand-picked by the club.

When others have met and tried to work with her, like Wendy Perfect as Valley Gold promoter and Jean Huelin as NW Kent Addicks representative on the forum, they have eventually walked away in frustration and publicly criticised her lack of genuine engagement and effective response.

When new senior staff have come on board, like Mel Baroni, in communications, and Felicity Waller, in commercial, they have soon quit because the club is so poorly led.

It’s a pretty bizarre situation when you have former club sponsors, which in the case of Axis Plc is a much bigger company that Charlton itself, helping to finance protests at the ground, and former directors seated in the directors’ box openly joining in the demonstrations, with executive box holders at the forefront too.

With such an overwhelming consensus lined up against the ownership it’s no excuse, but  also no surprise, if some individuals cross the line.

Ironically a number of the leading activists in the Coalition Against Roland Duchatelet (CARD) would in other circumstances actively support any campaign within Charlton against misogyny and homophobia. But to claim that misogyny is a primary characteristic of what is happening at The Valley is as wide of the mark as the suggestion that the club’s problems are limited to football. After all, Perfect, Huelin, Baroni and Waller are all women too.

The CARD decision-making group includes a number of strong female voices and the coalition has been careful to ensure that its public voice is provided by women as well as men. And CARD itself has warned against the risk of protests based on misogyny or xenophobia.

In fact the common thread in Meire’s complaints is not misogyny but the affront to her dignity and self-importance. Why else would she complain that people were laughing at her and her boss on message boards, which is the fate of every chief executive and owner at every club from time to time? So bloody what?

She also has no idea of the depth of vituperation directed at her predecessors by individuals over the internet, including in the Premier League years. But that never represented anything like the scale of alienation and hostility that she has managed to generate throughout the ground by her arrogance and stupidity - a situation where 80 per cent of fans surveyed advise the supporters’ trust board to tell the owner to sell up.

Words like “hate” get bandied all around all too easily in football and for me they don’t belong in this discussion. I can respect Meire’s resilience and her ability to make a good early impression on people she meets, but there is insufficient substance behind it and the club and its fans are hurting as a direct consequence. We want her out not as part of some game or personal vendetta, but because this needs to stop for the good of Charlton.

Criminal offences should be reported to the police and action taken by them as they see fit. But her comparison of the abuse she has suffered with “racism” is deeply inappropriate and offensive to the supporters of a club which led the way in taking on that issue.

The objection to Meire is not that she is a woman, that she is Belgian or even, as last Saturday's banner asserted, that she is a liar. It is that she has shown over two and a half years and beyond any reasonable dispute that she is unfit to be chief executive of Charlton Athletic. And yesterday she showed that again.