Who knows what's around the corner? 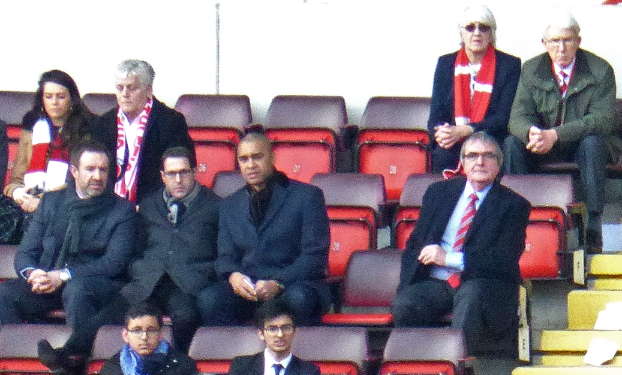 Paul Elliott’s name has appeared in headlines connected to Charlton Athletic, after VOTV revealed that he is fronting a potential consortium interested in taking over the club. This makes a welcome change from the Addicks being an object of pity for our predicament, as has been our place in the national news in recent times.

We are now allegedly priced at £38m, which seems steep for a club on the precipice of relegation, but not so much when we consider that Crystal Palace’s last game in the Championship netted them an estimated £120m per subsequent season. That’s the value of getting into the Premier League and surviving. It’s a bloody long way from Fleetwood on a freezing weekday night though!

But despite that note of gloom, there’s a popular expression in my hometown that you never know what’s around the corner, and I’m hoping the same applies to Charlton. This club has a very special meaning for me, and as we come towards the summer I’m going to sign off the season on an optimistic note.

Not that there’s much to be optimistic about on the field. The memories of this year are ones that none of us wanted, but they have been forced upon us. Images of protests and Pinocchio. Songs of resistance. Songs of anger. Men in masks taking their fight to the doorstep of a board who cowered in the shadows. The Grim Reaper. Roland Rat. Echoes of the Back of The Valley campaign I wasn’t here to see. Conversations with people I’d never otherwise have spoken to.

That now seems like wishful thinking, as the darling buds of May approach, and we end the season with the possible ignominy of being replaced by Burton Albion and Gillingham, or even a lesser known team by the name of Millwall. At least Burton produces fine ales. Millwall just do super-strength lager for breakfast, I’m told.

But despite this potential pain of seeing all our recent foes playing in South Bermondsey next season – Fulham, Forest, maybe even Sunderland – as we face Fleetwood Town and Plymouth Argyle, there is reason to be hopeful. We genuinely do not know what is around the corner, and I’ll give you two examples as this season comes to its inevitable fatalistic end.

The first one comes from November 2007. A night in the Bugle Horn. Stepping out of the rain after looking at a house in Charlton with a friend, we come into this old village that hasn’t changed much since a postcard from the 1800s. Step through the smoky doorway and into this pub that’s decorated in football memorabilia. Order drinks, take a seat by the fireplace with the image of a bugle on the wall. Apparently, the word “bugle” comes from castrated bullock, a call to arms.

“Charlton hardly seems a place for fighting,” I thought to myself. Little did I know what was around the corner!

It all seemed peaceful then. The place was warm. There was a dartboard on the wall; football on the TV; a red interior, Charlton red; a back area where people can sit and smoke or chat on warmer nights.

On the wall opposite there was a picture of the Charlton team that won the 1947 FA Cup. There were league tables and images of games from the past; the 2-0 win over Manchester United just before the war. Then February 24th, 1937, a programme for a game against Arsenal, Charlton top of the league, Arsenal second and Manchester United bottom of the table. Alongside that cartoon strips of a big goalie with a bigger grin, named Sam Bartram. Then something about a 7-6 win over Huddersfield in the mud and frost.

I liked this pub and I liked this place from the first moment I went in there. They had a guy above the bar I sort of recognised – left-back by the name of Chris Powell. Paul Walsh was there too, and Elliott. And the fact of Elliott being there is significant, because he could now be among the men who seek to rebuild this club in the image of times past, as we move on towards the future.

This Charlton seemed a place that was proud of its history. I moved into a house there soon after. Then I started following the football team, because the fans passed my house every match day and they seemed a good bunch too. I lived 15 minutes away from the ground, so I decided that I should go and "support" this local team.

That was early 2008. I know – maybe I jinxed the team! From there on in, it was a slow crawl downhill, but one that had character. Even when losing there was soul about the team, soul about the place. We had Phil Parkinson. We had Nicky Bailey’s penalty that ended up somewhere in outer space. We had moments that were hard to take, but we had a sense that we somehow had a stake in this team, and the boys in the red shirts somehow had a stake in the history that I first encountered on the walls of the Bugle Horn.

Anyway, I followed Charlton on their descent and then in the winter of 2011, I saw the return of that man I first encountered in the Bugle Horn.

Chris Powell answered the call to arms, stepped down from above the counter, and came back to lead us into the promised land. Again I felt like a jinx, having missed his first couple of victories and then followed every home game afterwards, when we went on a run that saw us finishing lower than Yeovil and Rochdale.

But again we never know what’s around the corner. That summer we started signing new players at a rate of what seemed like one a day, and we built a whole new team, snapping up three newcomers in a single day at one point.

That brought a strange mood of excitement to the Valley, of sweeping the place clean and starting from scratch, but at the same time building on the foundations of history. This, after all, was what one of the men on the walls of the Bugle Horn had done – the great Jimmy Seed building his team of the 30s and 40s.

By the end of that season of Powell sweeping his changes through the corridors of the training ground up in Sparrows Lane, we would be champions of League One. We’d have a whole new set of glorious images and memories, but at the same time we felt continuation rather than breakage. Even for all that we can blame Alan Pardew and Iain Dowie for, they never broke the connection with that history displayed so elegantly on the walls of so many of our local pubs, not just the first one that I happened to walk into, on my first night of coming to Charlton.

Things have turned out badly for us ever since that great season of 2011/12, but we can only hope they get better in the times ahead. We never know what’s around the corner. There hopefully will be change in the offing. We can only hope next season will be as memorable as the last one we spent in League One.

I just fear it won’t. I have not renewed my season ticket and, though, that is a hard thing to do, I have stayed true to the principle. But as I say we never know what’s around the corner. We could yet get an owner who will give us our Charlton back, the Charlton I first encountered on those walls of the Bugle Horn, and that I still encounter in the spirit of any place where Charlton fans gather during the week or at weekends.

There is something special about the club. We have a huge following. It’s just sad that so many of us are contemplating turning our backs on the thing we love if something doesn’t change. I’m hoping it does sooner rather than later.

If Mr Duchatelet sees himself as a visionary who will be remembered by the world in 100 years’ time, he should get out of football and into a whole different ball game. Football is remembered mainly at a local level and I can’t imagine any of the pubs in Charlton having pictures and stories of Roland on their walls a century from now, as they do Sam Bartram and Jimmy Seed.

Mind you they may have cartoons, because that’s all he’s ever going to be in the history of Charlton – a bad joke!

Meanwhile, whatever happens with the alleged consortium, guys like Elliott will always be our heroes.

We can only hope then that this gathers steam and that changes are indeed just around the corner for Charlton. £38m seems a high price to pay, but it’s not much if we have the right people on our side who can steer us back towards the Premier League, or just plain old respectability.