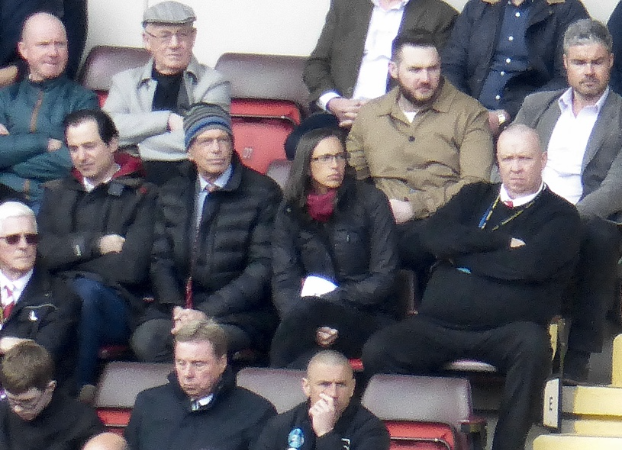 Back from holiday: Meire at The Valley against Derby County with chairman Richard Murray and two security men

"You are mistaken. We are not failing."

For the first time in many months, however, it’s Charlton chief executive Katrien Meire putting her name to the latest platitudes and promises to learn from mistakes that have already been repeated by her administration more times than a classic episode of Dad’s Army. Both contain an element of farce, but only one of them is funny.

That’s the same Meire who told fans last November that they were mistaken to believe the regime was failing, after it appointed a Belgian third-tier manager to address a run of results that already pointed the way to relegation, to which the team inevitably succumbed on Tuesday night.

The club has been rudderless pretty much ever since, although the season’s third head coach Jose Riga managed to add a modest veneer of respectability to results and performances towards the end. But even he is already hinting that he won’t be here next season.

Relegation has been inevitable for at least two months, but owner Roland Duchatelet, Meire and the collection of toadies and lickspittles around her preferred to believe otherwise. That’s yet another mistake.

Unflattering comparisons will inevitably be made with the 2011/12 season, when Chris Powell - the manager Duchatelet dismissed after two months - led the team to a 101-point League One title triumph.

It’s sometimes mistakenly assumed this promotion was about a disparity of resources with other third tier clubs, yet Powell had actually been handed a lower budget than his predecessor Phil Parkinson in each of the previous two years, and certainly less than the club’s main promotion rivals.

In fact the key was recruitment, planning for which began soon after Powell arrived at The Valley in January 2011 and well before April. It also involved a team of highly experienced and knowledgeable individuals, led by then executive vice-chairman Peter Varney.

Meire says in her statement that “I and the club’s senior management team will start the rebuilding work immediately. Our sole aim is to be fighting for promotion next season and our top priority is to put together a squad that can help Charlton Athletic get back into the Championship”.

But who would that be, exactly? Two members of the club’s senior management team have quit in the last month, soon after arriving, while chief operating officer Tony Keohane’s expertise is in catering and chief financial officer David Joyes may be creative with accounts but he is not renowned for his football judgement.

You would think that a chief scout would play a fairly prominent role, but Phil Chapple - who was very much part of the planning in 2011 - walked away last September. Meire ran a recruitment process to replace him that was due to close in early March, but has so far made no appointment. Still, she's been away on holiday.

The sainted Lennie Lawrence, manager from 1982 to 1991, has been lurking in the directors’ box at recent matches, but is said to be unwilling to come on board even if Duchatelet will sanction it without guarantees about the extent of his autonomy. Heaven  knows what such a promise from Duchatelet is worth.

And what role would there be then for Meire, whose scattergun approach to contracts has burdened the club with a ridiculous number of long deals for players who in many cases will not be fit for this purpose?

Perhaps the biggest irony about a regime which talks about financial prudence is that it repeatedly wastes hundreds of thousands of pounds because it lacks football expertise at the top. But implying they are "penny wise and pound foolish" would be to exaggerate their talents. This lot don't even do the easy things well.

Riga’s post-match comments on Saturday suggest he has his own concerns about future decision-making processes, while first-team coaches Wim De Corte and Simon Clark were themselves “interim” until a one-word edit was applied in last Saturday’s programme against Derby County.

This is not a structure or a timescale on which you build a promotion challenge and there is no evidence that these are the people who can do it.

That it should be headed up by a 31-year-old lawyer who has failed, failed and failed again in her two-and-a-half years at the club, cannot open her mouth without putting both feet in it, and is regarded as languidly hands-off even by her own staff, is even greater cause for concern.

That’s before we get to Duchatelet’s record of intervention “before breakfast, before lunch, before tea and before dinner”, as the 1980s politician Michael Heseltine once put it.

The absentee owner is clearly a man who has no idea whatsoever how to run an English professional football club in practice, yet appears determined to demonstrate that to the point of destruction. How can any credible football person, including Lawrence, sensibly consent to operate in such an environment?

Whatever the words of Meire’s statement say, the message it spells out is that the regime has no plan, no self-awareness and no sense of shame at what they have done to Charlton.

And it screams that they plan to carry on exactly as they have so far, convinced that every decision “has been proven correct” and that the blame for failure must therefore lie elsewhere.

In fact, there will be no “glad confident morning” at The Valley for Katrien Meire ever again. Arrogance and lack of day-to-day accountability only gets you so far, even with those seated in her own directors’ box. No wonder she is surrounded by security there.

If there is one positive to be taken from the latest exercise it is simply that we have heard from Meire before about the club’s future, announcing the beginning of searches for future head coaches.

It’s quite clear that she had no idea then what was about to happen next.

Why should we take her any more seriously now?