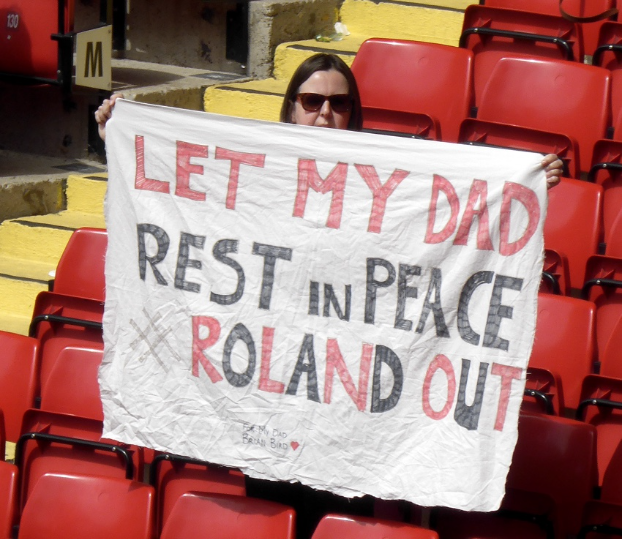 Holding our ground is what matters now

Yesterday as Leicester City celebrated their Premier League title, something about the scene felt like a wedding on the day you have just split up with a partner. Empty seats for half a season and comments on social media suggest that there are many Charlton fans who have decided to pause their relationship with the club – just four years after one of our finest hours since the turn of the century.

It seems long ago now that I gazed down from the upper west stand on a sunny afternoon with Smurfs to the right of me, and the rest of my tribe to the left. Then stuck in the middle at the end of an airshow we had Chris Powell, Johnnie Jackson, and the glorious team of 2011/12 dancing on the podium, same as the men of Leicester yesterday.
A group of gutsy heroes etched into the folklore of their club – as every club has its men of folkore. Leicester have Claudio. We had Chris. Leicester have Robert Huth. We had Michael Morrison. Leicester have Kasper Schmeichel. And we had Ben Hamer, who Leicester now have too. They have Jamie Vardy who has given them memories and goals that possibly only Colin Walsh, Chris Duffy, and Clive Mendonca can lay comparisons with in Charlton’s history – goals that won medals or sealed a special moment in immortality.

Walsh 3:07pm 05/12/92 – some of the first words I ever read inside The Valley and words I read still every time I glance up to the Covered End. Many of our fanbase thought that the battle to take back The Valley was the war to end all wars, but these past few months they’ve been back in the trenches, fighting to keep hold of our territory. Around four o’clock yesterday I looked around the banners, the blocks, and the different corners of the ground wondering when I will next grace its sun-bleached seats. Because I started off as a casual supporter I have been around the blocks and watched the action from every end, except the Jimmy Seed Stand.

Back in 2008 I saw my first game in the left wing of the east stand against Preston North End, a drizzly day where Paddy McCarthy scored the virgin goal of my times watching Charlton in the flesh. That same day I learned the word ‘Feeeeessssshhhh’ too, when the scoreboard swished towards the advertisements.

I probably tasted Valley beer for the first time too and listened to the banter that characterises Charlton games, and is always a source of amusement and unexpected word play, classic grumbles, or eleborate metaphor. Something about that day was the start of my addicktion.

More games followed – such as two consecutive seasons of Watford in the north-west quadrant where my girlfriend’s father preferred to sit. Then bizarrely in the aftermath of relegation in 2009 I started to attend more frequently. Memories of those seasons are mixed up and not chronological. But they include my day among the Covered End choir at Football for a Fiver when we crashed against lowly Exeter City. The lower east on the afternoons of textbook dull slogs against the likes of Brentford and the Umpa Lumpas of hard-as-nails Hartlepool on the last day of 2010/11. Back in the north-west on a deserted Saturday of snow stretching down to the coast of Kent when Luton Town arrived at The Valley for an FA Cup match. The ground was empty; we could stroll the entire stand, almost top to bottom.

Maybe that’s how it will be next season too. But I couldn’t have imagined that on my first forays into the upper west stand in the year of Chris Powell’s team running away with the League One title. Or even the next year when I got a season ticket in the east stand, back where the love affair began. Then the year after was a strange one for I didn’t buy a season ticket because of several weddings, birthdays, and sacraments over the course of the year.
In truth I ended up spending far more money that way, but I got a chance to move around the ground once again – the south-east corner on an evening when Nottingham Forest came to town and it was literally a game of two halves at the opposite end of the field almost the entire time. Then back to the west with a group of friends to watch FA Cup holders Wigan on a Sunday that seemed nearly as cold as Luton Town, without either the snow or the goals.

Up and down, around the blocks I went that year, even spending an afternoon in a box watching Sheffield Wednesday thanks to Valley Gold and its wonderful custodian of that period. Then the next season with all the weddings and birthdays over, I returned to the west upper and have stayed there since on my 20 or so visits per season. There’s always one or two I miss, like Peterborough United on a wet Tuesday night or Doncaster Rovers on a rainy Saturday, games you are prepared to sacrifice for the greater good.

These past eight years I have been around the blocks at Charlton and know every inch of the ground from sight, if not from having sat there. I know the pitch too from frosty days and December afternoons against Millwall to the glorious baize of last season where Tony Watt danced around the corner flag and we breathed hope for the future.

So yesterday at the end felt sad. I know opinion is divided on the matter of purchasing season tickets. I know it would severely test my willpower if Millwall came to town on the first day of next season and friends or family wanted to go; for example the man who is now my father-in-law and who I managed to convert from a north-west man to a westerner. But that is a discussion for another day.

The key point now is where do we go from here. What happens now? This feels like the morning after an election when all the placards and manifestos have been put to bed. But unlike in London we still have the same Meire at Charlton. The campaign isn’t over and there are different opinions as to how the battle should be fought.

Is there to be a summer recess, like they have in Parliament, where all the momentum of the past months is lost? I would think not and hope not. As an outsider to the campaign I see too much conviction and creativity on the part of CARD to let this battle wither and die as we head for the seasides and forget football for the summer.

Yesterday, as the Burnley fans rallied to our cause, we saw how successful CARD’s policies have actually been. It would have been easy to let this campaign turn hardcore and nasty, but that hasn’t happened. Anyone who thinks it has been wild and disruptive should have seen Belfast in the 1980s and 90s when both sides, rightly or wrongly, felt that their land, their culture, or whatever else they felt allegiance to, was being taken away from them.

Of course that was a whole different ball game. There was never anything to unite the various factions. You didn’t get the different sides all coming together in moments such as yesterday, or when the Brighton fans stood alongside us. What’s fascinating about this protest is that even though there are differences of opinion within the stadium, within our own support base, the campaign is pulling together groups of very different people in the name of a common cause.

Let’s hope that continues and this momentum doesn’t just fade. I may not have renewed my membership to the west upper next year and indeed after yesterday I threw my season ticket at the feet of Sam Bartram in disgust – but I do hope to be back around the blocks at The Valley at some point in the future. I’ll certainly be there in spirit and at away games in the flesh.

Though Mr Duchatalet may feel happy to lose 5,000 or even 10,000 troublesome customers, he must surely realise that driving people into trenches doesn’t make them give up. As a man who sees himself as a visionary he appears to be incredibly blind to history and the motives of people in defending things they believe in, whether land, pastimes, or family.
For many people, Charlton combines all three – and that is a powerful reason as to why this fight is surely going to continue. Wherever we are there at the start of next season, there are corners of a field that will never be foreign to us, even if we take retreat to the trenches and take our leave briefly.

Besides, when I’m up in the north-west next season at Fleetwood, I can glance out into the haze lifting off the sea and imagine the mists rolling in from the Thames thinking of that banner: Walsh 3:07pm 05/12/92.

This fight’s a long way from over, even as we move to the interlude between seasons. And if we look back to Leicester, we can see that anything’s possible if we fight hard enough.