Latest success is another drama made in Denmark 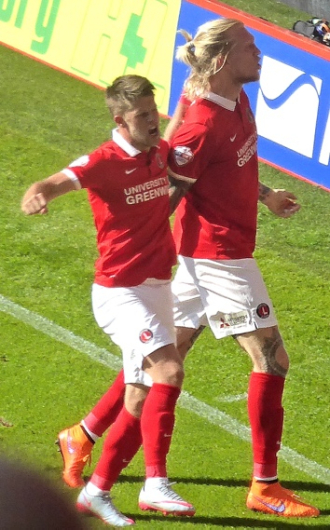 Football makes fools of most of us eventually.

While many Addicks may have thought a depleted Charlton side would struggle against relegated Hull City, one elderly fan had it more wrong than most.

Simon Makienok, he told me forcefully outside the ground in the run-up to kick-off, was one of the worst players he’d ever seen. Mention by way of comparison was even made of Pawel Abbott, the journeyman Pole who stopped by at The Valley in 2010/11. That was harsh to the point of being silly. But there is little doubt that Makienok had something to prove on a bakingly hot August afternoon in SE7.

The giant striker's failure to score at Nottingham Forest in midweek had cost the Addicks two points, even if the third of his three chances was brilliantly saved by Forest keeper Dorus de Vries, while he had fired straight at Derby counterpart Scott Carson when well placed the previous weekend. He’d played a part in the Addicks' goal at the iPro Stadium - and indeed the previous 2-0 home win over Queens Park Rangers - but rather too many lay-offs had also gone astray in the final third of the pitch for fans to be confident about his overall contribution.

Now with the talismanic Tony Watt absent injured, responsibility devolved heavily on the Dane. In the second-half of this slow-boiling encounter he took it on triumphantly. Not only did Makienok get off his personal mark by scoring Charlton’s opening goal on 52 minutes with a cleverly executed flicked header at the near post, but it was his sideways set-up into the path of the charging Johann Berg Gudmundsson that created the opening. Then, deep into eight minutes of stoppage time, it was Makienok whose pinpoint header diverted Ahmed Kashi’s deep cross back from the left edge of the penalty area and allowed Gudmundsson to retrieve victory by bravely heading the winner from close range.

There was nothing noir about this Scandinavian drama, but justice was being done nonetheless.

The more established scorer was every bit as deserving of the rapturous acclaim that engulfed The Valley - even though he'd failed to take a good chance to clinch things earlier on - but crucially it was the marauding Makienok who was the emerging hero. We knew about Gudmundsson’s quality and continue to relish it.

Before that it had briefly appeared that the exposed Nick Pope’s 89th-minute spill at the feet of Abel Hernandez would enable the visitors to add a point to the seven they had already gained from their opening three fixtures, a reward they hardly deserved.

The game as a whole was no classic, but with the Addicks also missing ever-reliable Chris Solly they had looked worthy winners until further injuries and the suffocating heat took their toll. Cristian Ceballos lasted only 24 minutes, with his off-balance substitute Karlan Ahearne-Grant falling to convert the best chance of the first period after he was put in behind the defence by the recalled El-Hadji Ba. The latter also gave way to league debutant Regan Charles-Cook with 15 minutes left, while Patrick Bauer endured the pain of a dislocated finger and keeper Pope was another to require treatment on an afternoon when all the players and officials were grateful for stoppages for the chance to grab a drink.

However, if the thin fabric of Charlton’s squad looked badly stretched then there was huge encouragement to be taken from the way the head coach Guy Luzon and his players adapted to the evolving situation. The defence, with Jordan Cousins starting at right-back and Charles-Cook finishing up there, remained solid for most of the afternoon against a Hull side that admittedly offered almost nothing of note for the first hour.

A rather sparsely populated Valley celebrated the winner raucously - too much so in the case of Luzon, who was sent to the stands for joining in with the players when the second goal went in. It was not so much that Charlton stood third in the table after four matches, but the fact that their eight points had been gained from fixtures against four of the expected better teams in the division.

I didn’t see the old guy afterwards, but even he would surely have had to concede that this was Makienok’s day - and that on this sparkling evidence there are bound to be more of them to come.