Luzon's Addicks prove unable to do a recovery job 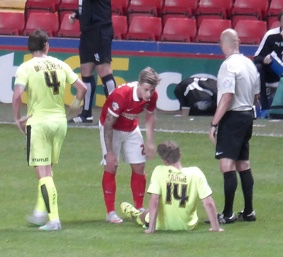 Goals change games - I’ve never been struck by the profundity of one of football’s more obvious cliches, but that doesn’t mean it isn’t true.

After seven matches that had seen them take the lead six times, with the other a goalless draw, Guy Luzon’s new-look Addicks fell behind twice in four days and never really recovered on either occasion.

Rotherham once won 5-1 at The Valley in a season when they were relegated, but as they are a club the Addicks did not even encounter during their recent sojourn in League One they are bound to be considered minnows at Championship level. Perhaps that partly accounts for a complacent approach by the home side, but a third 1-1 draw against the Millers in just over a year was about what Charlton deserved on Saturday.

True, the corner from which the scandalously unmarked Fared Rawson converted at the back post should never have been awarded, but that hardly explained the schoolboy defending. And it took two smart saves from Nick Pope to keep Charlton in the game, despite Patrick Bauer opening his account with the equaliser on 64 minutes after clever work from El-Hadji Ba and Simon Makienok.

Equally, Lee Camp had made a tremendous first-half save to deny Jordan Cousins, but 14 of the 21 home shots trumpeted by head coach Luzon were off-target, meaning that the Addicks too rarely looked like formalising their disproportionate possession in the scoreline.

Steve Evans’ side left The Valley still looking for their first win of the season and Huddersfield Town arrived in the same situation, with former Valley boss Chris Powell’s managerial tenure looking precarious as a consequence. Charlton were more purposeful with the half-fit Makienok replacing the equally unready -looking Igor Vetokele for the last half-hour against Rotherham, so it was no surprise that the starting line-up for the Tuesday night match reflected this.

Yet the displacement of Alou Diarra, excellent on Saturday, by League debutant Naby Sarr to take on the substantial forward presence of Ishmael Miller proved a handicap too far. Sarr scored Charlton’s goal, with a glancing headed finish from a right-wing corner five minutes before the break, but by then the Addicks were two behind.

An error by Pope, who misjudged Harry Bunn’s 20-yard half-volley, despite getting down to deal with a shot that should have been at a decent height to push away, gave the Terriers the lead. He was then beaten low inside the same left-hand post from similar distance by Emyr Huws’s free-kick, although that was less obviously his fault. Possibly Powell had targeted Pope’s known fragility, but it was a very disappointing night for the 23-year-old.

His spill against Hull City had almost cost the Addicks two points in August, but this time Charlton’s wild finishing, with substitute Zakarya Bergdich and Makienok both missing good chances, meant they could not repair the damage.

Pope remains the focus of much goodwill among the Valley faithful, but he will know as well as anyone that each addition to his catalogue of errors makes it less likely that he will get the chance to establish himself in the Charlton side - however well he does on other occasions.

It was noticeable that the revival in the Addicks’ fortunes last season coincided with the return of the injured Stephen Henderson in goal and the failure to recruit a third, more experienced keeper, while sending two younger keepers out on loan, may take its toll.

In fact, this was the third tired performance from Charlton in a row and while some may point to injuries and international expeditions, there are some questions be asked about the viability of the squad and the present capacity of some players to cope with the frenetic English Championship schedule.

If Diarra, at 34, cannot be expected to play in every game at the back then even barring injury the Addicks may also need more defensive cover. In the meantime, the decision to force Andre Bikey out looks a poor one, notwithstanding any relationship issues.

Equally, Ba’s recent performances in central midfield alongside Ahmed Kashi have not justified the displacement, again, of Jordan Cousins to the left side of the midfield.

Suddenly this season has begun to look alarmingly like the last one and with three consecutive away games to follow Luzon needs to steady the ship quickly lest he starts to take on the appearance of Bob Peeters as well. At the very least, he may lose some hair.

Unless they pull off an unlikely victory at Queens Park Rangers in the meantime, next opponents Blackburn Rovers are the third team without a win that Charlton will have faced in succession. Should they too break their duck against the Addicks then disillusion may set in at The Valley. It was already manifest to an extent in the rapidly clearing stands during five minutes of stoppage time against Huddersfield.

That would be a shame, because the start to the season was full of promise and the ability in the side should yield better results than these. But it’s far too early to panic yet.