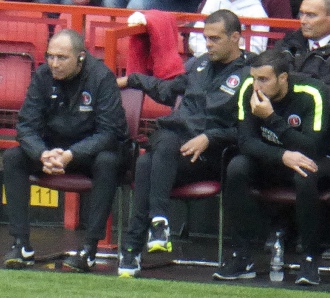 Unseated: axes coaches Matthew, Luzon and Martane against the Bees

Battle-weary and browbeaten, a few of us sat down after Saturday’s game, sipping our beers between two television screens, one showing the rugby and the other Arsenal.

Beaten by Brentford, things looked bad. We all agreed there was something rotten in the state of Denmark, to use a quote from Hamlet. Not the pub though where we were drinking. The Rose of Denmark is in great shape these days, full of happy punters and offering several screens and sources of sporting entertainment. It’s further down the road, inside the castle walls of The Valley where the rot’s setting in – again, as has been the pattern of recent times.

We sack one manager, then we get another who’s something of an unknown quantity, and we have a brief bounce before our opponents start to sus out the team and the tactics. Then we slide again, the manager gets the blame, and the cycle continues. So far we’ve been lucky in that we’ve managed to bounce back early enough, and high enough to preserve our championship status

.
This season though feels like an echo of Phil Parkinson’s time at the Valley, when he had very little to play around with in terms of resources. The two recent defeats brought back memories of October 2010 when Brighton hammered us 4-0 at home.

Little wonder then that as we sat in the Rose, we couldn’t even bring ourselves to discuss the day’s game, switching between glances at the Rugby World Cup semi-final and jokes about which places in League One would make a fine weekend visit next season. Never been to Shrewsbury, so that’s one option, and probably preferable to Gillingham in the rain, if they don’t bypass us in their unexpected position as current League One leaders.

Shortly after though, there was a change in the mood. News surfaced, perhaps in a letter dispatched from Belgium, that Guy Luzon’s contract had been terminated. Instantly, our minds went into a Macbeth-like overdrive of fantasy and ambition.

As the pot stirred with rumours of who might assume the helm, I had a moment of drunken fantasy – well, one that’s clean enough to share – featuring that famous scene from Henry V. You know the one, so brilliantly acted out by Kenneth Brannagh in the 90s film, where King Harry wanders around the campfires among his soldiers to gage their opinions, and then ends it all with a brilliant speech about how hard it is to be a leader.

Fuelled by German lager, I imagined two hooded figures wandering in out of the rainy night, and sitting down amongst us to hear our thoughts on the battles that lie ahead. After sitting awhile and noting our opinions they finally speak, disguising their accents at first, and then bare the faces behind the hoods, and maybe add a crate of Belgian craft beer into the mix on the pub table.

Alas though, you’d have to be as mad as Hamlet to expect this – even if there is a school of thought that says Hamlet was not mad at all, but merely feigned the whole thing as part of his grand plan. There was method then to his madness, even if his search for answers did go horribly wrong in the end, with a lot of the cast falling by the wayside before the final curtain came down.

Though the same curtains have been drawn on Guy Luzon’s time at Charlton, auditions are already taking place for the next leading man on stage. Some of us might like to see a King Harry figure take the helm and rouse us back to the glories of former days, as once upon a time Chris Powell seemed destined to do.

Others would like to see the return of similar warriors from the past such as Jason Euell, Paolo Di Canio, or even Jimmy Floyd if he could perform the same miracles as he has done with Burton Albion – a place of good ales that we might not even get the chance to visit if they too, along with Gillingham, leap over us on our way down.

Sadly though I imagine we’ll end up with the equivalent of Rosencrantz and Guildenstern, sideline characters in the kng’s court brought to the centre because they do as they are told; enlisted to fight temporary fires rather than for a long reign.

Whoever’s in for the auditions and whoever gets the role, I hope they do a good job of it, and get the resources we need, which is essentially bodies in the squad with championship experience. There is talent in this team, but there’s also something wrong when their form seems to rise and fall so dramatically over the course of a season, with 2014/15 being a prime example.

We know now that was a false dawn in some ways, but also perhaps evidence that if he’d had the right resources Guy Luzon could have achieved far more than he did in his short tenure. He’s been trying to play a card game without the full pack, and has probably suffered a sense of frustration and resignation that spread through the dressing room and out onto the pitch on recent match days.

Jordan Cousins in the past two games has looked a shadow of the player from the end of last season and a few flashes in this one. Morgan Fox, a couple of weeks ago, was being linked with a move to Manchester United – maybe on account of how much a revelation Joe Gomez had been at Liverpool.

We saw last season that Tony Watt is capable of brilliance at times, and Simon Makoniek commands the upper third of the field with a physical presence that isn’t being used as effectively as it could be.

Then there’s Jóhann Berg Guðmundsson whose head and heart also seems to have dropped in recent weeks even though he needs a good season to break into the Icelandic first eleven on a permanent basis for next summer’s Euro championships. Stephen Henderson must also have a dream of playing for Ireland, especially since Shay Given’s close to hanging up his gloves.

There is hope then for this team and plenty of players with reasons to fight for themselves, as well as the cause of Charlton, but they too must feel as if this could all become a bit of a farce. If some new guy comes in, the most they can expect is that he’ll be there for a short while and then he’ll be got rid of as well, once the results start to dry up as a consequence of his limited resources.

For a long time I have tried to convince myself that though this be madness, there is a method behind what is happening at the club in recent times. I’m not sure I can say that right now. All we can do though is await the auditions, even if I also get a feeling that the ending has already been scripted, and by the time we go up to the Riverside a week from now, there’ll be a new man centre stage.

And alas poor Guy, we never got to know him as well as we imagined we might back amid those flashes of merriment that his team offered in the season past, and the start of this one.

I suppose his whole story is summed up in two acts, one that only really got going against Brentford, and ended in the same place. There seems a lot of distance from 3-0 to 0-3, and yet at the same time it feels like we’re right back to where we started from.

Karel Fraeye has since been appointed interim head coach.