Take me to your leader – the hunt for the next captain 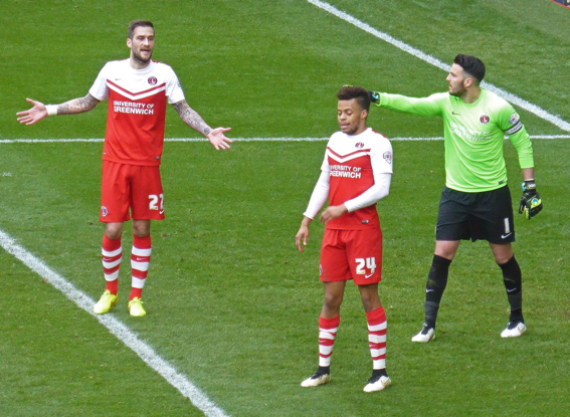 I'm in charge: Stephen Henderson with the armband last season

This is an updated version of an article that appeared in VOTV119 at the end of the 2014/15 season.

Stephen Henderson wasn't the first goalkeeper to captain Charlton when he was handed the armband last season. The keeper, signed in July 2014, wasn't even the player with the lowest number of appearances to have skippered the Addicks.

But there have been few enough similar occasions in the club's history for the honour to be noteworthy - and it expands the already wide variety of characters and approaches evident in Charlton's captains of the last 15 years.

The only man to have lifted two major trophies with the Addicks, Mark Kinsella, was everything a manager or supporter wanted to see leading the club on the pitch. Whether it was throwing himself in front of a shot or cajoling a teammate, Kinsella was the embodiment of passion.

When Kinsella was injured, as he was for much of the 2001/02 campaign, wily old pro Graham Stuart stepped in, and then Matt Holland and ultimately Luke Young took on the armband.

In 2002/03, following Kinsella's departure, the captaincy was shared around, but only because manager Alan Curbishley was seemingly denied his first choice.

Indeed, one of the most remarkable aspects of Gary Rowett's 13-game Charlton career was that he captained the club on several occasions; his persistent injury derailing Curbishley's skipper succession plans as well as prematurely ending his career.

What makes a good captain? Different players can have discrete attributes and qualities, and not only can these naturally change over time, they can be perceived differently by different managers.

Rowett's subsequent success as a manager with Burton Albion and Birmingham City could be said to show he is a natural leader, while although Scott Parker's performances in SE7 brought out the best in the teammates around him, he was never considered captaincy material at that stage in his career.

Of course, Parker later went on to become one of the few players to captain his country. And while the fact the accolade was granted by then caretaker England boss Stuart Pearce might render the feat less impressive than it should be, the midfielder has since displayed classic captaincy qualities at Fulham.

Among the Valley terraces, Parker is perhaps best remembered for the apparent selfishness that saw him force through a £10m transfer to Chelsea in January 2004, an incident that led to the midfielder still being roundly booed when he last month returned to Charlton fully 11 years later.

But it was his selflessness that was displayed in September 2013 when, according to reports, he stumped up £20,000 of his own money to pay what he considered to be excessive fines on behalf of two young Fulham players during Felix Magath's bizarre reign at Craven Cottage.

After all, being a captain, and showing leadership, is not all about what happens on the pitch.

In modern football the captain is also the leader of the players' committee when it comes to negotiating the players' bonus payments with the chief executive, and usually even sorts out the passes to the players' lounge for friends and family.

When things are going wrong, the skipper needs to step up - and Charlton's Premier League plight in 2006/07 was never better illustrated when less than a handful of players turned up to a team bonding night that Young had organised.

Holland proved the perfect ambassadorial captain, as was fellow Republic of Ireland midfielder Andy Reid, a particularly likeable character known for his friendliness and approachability around the club.

His selection as skipper, though, probably owed more to the fact that he was by a large margin the best player at the club at the time than any particular inspirational qualities, although he once again wears the armband at current club Nottingham Forest.

Former Crystal Palace captain Mark Hudson assumed the same role when he arrived at The Valley in 2008, but could do nothing to halt the club's downward spiral into a second relegation in three years, while Nicky Bailey, not the most comfortable interview subject, focused on letting his football - and in particular his goals - do the talking while leading the team in League One.

Perhaps Charlton's best traditional captain of the last decade, though, was Christian Dailly. An experienced pro, Dailly was a born organiser who led Scotland 12 times and commanded respect among his peers.

Indeed, how they are regarded within the dressing room is a key component of a captain.

The best are more than a manager's mouthpiece; in addition to carrying out the boss's orders, and spotting when someone is slacking or needs encouragement, they are also the squad leader who must put the players' views across to the coaching staff when necessary.

Charlton's latest skipper, Johnnie Jackson, deserves to be ranked among the best in Charlton's history, alongside the likes of Kinsella, Don Welsh and Jimmy Oakes - even if it could be argued that his appointment contained an element of fortune.

Jackson was one of the few players in whom new manager Chris Powell saw merit in the final few months of the dismal 2010/11 campaign and, with few other options (Gary Doherty anyone?), making him captain ensured some continuity as the squad was completely overhauled the following summer.

Thankfully, Jackson flourished in the role, and he played a big role in the quick gelling of the Charlton squad that helped lead to the League One championship.

His goals have often been key, whether great (successive free-kicks against promotion rivals Sheffield Wednesday and Sheffield a United), crucial (his last-minute equaliser against Queens Park Rangers) or simply inspirational (his brace against Cardiff City in the 5-4 win).

Jackson is also comfortable and charismatic in the presence of the media, to the extent that he already seems to be planning a career beyond his playing days by becoming a regular on talkSPORT.

That's something that couldn't be said of the next-in-line Chris Solly, whose well known superstition-prompted determination to avoid interviews - because he has subsequently suffered injuries on previous occasions - saw Jackson rather than club staff pose questions to him in an issue of the Valley Review last season.

So who will be Charlton's captain in 2015/16? And who could take up the role in the long-term?

At present, Jackson rightly wears the armband, and has a few more years in him yet. But given Jackson has started just two league matches since Guy Luzon was appointed last January due to an injury that also delayed his pre-season, we have little indication of how he is valued as a player by Luzon, never mind as captain.

Despite their recent stand-in status, Henderson and Solly are unlikely to be serious long-term candidates, while recent potential leaders/organisers of the ilk of Michael Morrison, Tal Ben Haim and Roger Johnson have departed the club.

Johann Berg Gudmundsson fulfils the criteria of being a certainty for Charlton starting XI and, how having signed a new contract, seemingly in SE7 for the long haul, more so than fellow attackers Tony Watt and Igor Vetokele.

Rhoys Wiggins is apparently on his way, while Morgan Fox is still inexperienced (but has a good head on young shoulders). And for all the summer transfer activity, none of the seven players recruited thus far scream skipper potential.

In the final pre-season friendly, it was Alou Diarra, a former captain of his France, who led out the Addicks (although we don’t know whether he would have done so had Solly not been absent).

Diarra at least has the necessary credentials for the role, but it remains to be seen how much of a starting role he will have once the season gets under way. The late arrival of Naby Sarr means he seems set to partner Patrick Bauer at the back against Queens Park Rangers but, presuming Sarr is destined for this position, it’s hard to see how Diarra, primarily a central midfielder, will be anything but back-up in an engine-room that has plenty of other pistons.

Those options include El-Hadji Ba and Ahmed Kashi, the latter of whom speaks little English, while the former and Sarr have barely amassed 30 competitive senior matches apiece.

Cristian Ceballos is another who comes under the category of promising youngster rather than wise leader, while totemic striker Simon Makienok and left-sider Zakarya Bergdich also seem far-fetched options.

Centre-half Bauer, a commanding and composed presence on the evidence of pre-season, might be a contender for the role in the future, but there is one other player whose star is on the rise and whose credentials grow stronger game by game.

In the original version of this article, I suggested Jordan Cousins was probably too inexperienced. It's hard to alter that view just three months later, but much has changed as well...

Now the reigning player of the year, having signed a new four-year contract and with Joe Gomez having moved to Liverpool, Cousins (along with Solly) is the homegrown hope of the terraces, a player whose hard-working performances and attitude resonate with the fans, and who does his best for the team regardless of where he is played.

That versatility and selflessness might count against his hopes of cementing a regular role in the team but, providing his progress continues, Cousins will surely captain Charlton sooner rather than later.