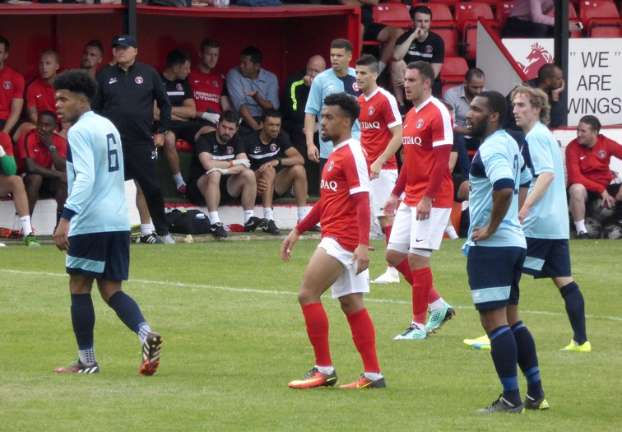 Shorts introduction: Nicky Ajose shows a leg as Cristian Ceballos, Lee Novak and (background) new boss Russell Slade look on during the second-half of the 4-1 win at Welling United

A second-half hat-trick by new signing Nicky Ajose at relegated Welling United helped underpin a mood of tentative summer optimism as Charlton kicked off another season with a 4-1 win at Park View Road on Saturday, July 9th.

Most present will have known that the annual warm-up match means next to nothing. Almost three years ago to the day, Joe Pigott scored three times before half-time and was soon touted by fans for a first-team start at Bournemouth on the opening day of the Championship campaign.

He didn’t get it and was eventually released by the Addicks this summer, having failed to get on the scoresheet once during a dozen Football League appearances for the club. Last week he joined League Two Cambridge United.

Ajose, however, is five years older than Pigott was in 2013, and scored more than 20 goals in League One for Swindon Town last season, even though his career had been slow to take off before that. Although National League South Welling’s defending was pedestrian, it’s a reasonable assumption that he will play a key role over the coming season, as will Lee Novak, who also appeared in Charlton colours for the first time in the second half.

Novak, 27, has a League One pedigree too, with 14 goals on loan at Chesterfield last season, while ex-Northampton Town winger Ricky Holmes, who also made his bow, is stepping up from League Two for the first time at the age of 29. All will be viewed hopefully, not least because unlike most of owner Roland Duchatelet's previous Charlton recruits since January 2014 they have domestic experience.

The friendly match was moderately interrupted in both halves by misbehaving teenagers, who threw smoke bombs and invaded the pitch, although not obviously for any other reason than that they could.

Otherwise the curtain-raiser served chiefly to underline the large number of question marks that still hang over new boss Russell Slade’s squad. A concerning injury to Alou Diarra meant that previously out-of-favour centre-half Roger Johnson was the only man to start both halves, while his defensive partner Jorge Teixeira is thought unlikely to survive the transfer window at The Valley. Teixeira, generally a class act but likely to be too expensive to be allowed to linger at the lower level, clumsily conceded a second-half penalty that briefly allowed Welling to regain equality.

Chris Solly and Tony Watt, whose future must also remain in doubt, were both unfit to resume, as was late returnee from Germany, Patrick Bauer. Player of the year Jordan Cousins featured, but is likely to leave. Ditto both goalkeepers, Nick Pope and Stephen Henderson, while Johann Berg Gudmundson is all but gone already. There was no outing either for midfielder Ahmed Kashi, apparently an injury victim again.

According to widespread reports, meanwhile, wide man Zakarya Bergdich had simply failed to turn up to start pre-season at all. He wasn’t missed here.

None of 19-year-old West Ham United defender Alex Pike, 20-year-old released Tottenham Hotspur midfielder Emmanuel Sonupe, or 32-year-old trialists Andrew Crofts, who appeared in central midfield, and Lewis Buxton, at right-back, made a huge impression in the first-half line-up, although Buxton crossed for El-Hadji Ba to nod the visitors ahead.

Chatham-born Crofts has 25 Wales caps and was on loan last season at Gillingham, were he had begun his senior career and rose to skipper the side, but he has spent five of the last seven campaigns at Brighton & Hove Albion, interrupted by a spell with Norwich City.

Buxton had seven seasons at Sheffield Wednesday before spending the 2015/16 campaign at Rotherham United, who recently released him. For the Owls he has played across back four, as well as in midfield, which might add to his appeal to Slade.

Both men are at the stage of seeing out their playing days, but as the rather more distinguished Diarra has shown that need not necessarily prevent them making a contribution at a lower level. Johnson, on last year’s form, might provide a counter-argument.

For the time being, at least, Charlton have left Europe behind, more abruptly than any referendum verdict was likely to allow the country to do so. That is wise, but doubts about squad depth and quality can no more be answered now than questions about the UK’s future trade relations.

Slade, however, continues to look and act the part. Now that the playing squad has returned to training, it’s likely he has gained a more complete understanding of the mess chief executive Katrien Meire presided over last season and a better grasp of why many supporters are so thoroughly alienated from the board.

In a break from previous years, both Meire and chairman Richard Murray put in an appearance at Park View Road, emphasising perhaps the extent to which they are now reliant on Slade stemming the tide of anger directed towards them and Duchatelet for the club's diminished situation.

So far so good, but simply in terms of confirmed personnel Slade is still a long way from completing the jigsaw of building a squad that can compete for automatic promotion in the season that properly begins in just under five weeks. As Sheffield United's six-year sojourn in the third tier warns, plotting a successful escape is not easy.

Meanwhile, half the club’s season-ticket holders have not yet renewed and the League One fixture list stretches out like a charge sheet against those who have brought Charlton so low. Meire and Murray will remain in the dock for the foreseeable future.