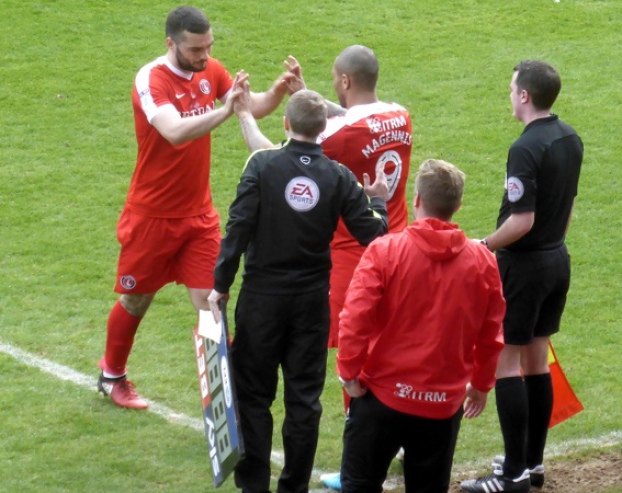 Surplus to requirements? Tony Watt has already been loaned out three times since joining Charlton in January 2015

Why Robinson still has a £3m summer headache

There was a telling set of quotes in a story published by the South London Press last week. The article by sports editor Rich Cawley was focused on the release of left-back Adam Chicksen, one of the few senior Charlton players thought to be out of contract this summer.

When asked if he wished there were more in the final weeks of their deals, Robinson said: “I think you’d always like more out of contract, yeah. I’ve made my mind up on some now. There will be a protocol in the summer for them. We gave these contracts out, we’ve got to abide by them. We have to stick by them. Whether I think they are of use to us is a decision I can only make over a period of time.”

It was a pointed reminder that while for some Charlton fans a new season may appear to offer a fresh start – the fourth in as many years, presumably – the club is still mired in its ownership’s past mistakes and is likely to remain so for some time to come.

It’s not unusual, of course, for some players to become unaffordable after a team is relegated or for a new manager to have different squad priorities to his predecessor. What is remarkable is how few of these signings have so far proven fit for purpose in the first place.

That’s 13 seasons written off in total, two more than the actual service they gave, whether in SE7 or, in several cases, out on loan elsewhere. Over the aggregate of six years that Lepoint, Nego, Parzyzsek and Tucudean stuck around, their actual contribution in SE7 was negligible.

While it’s unlikely these contracts were paid up in full, even by chief executive Katrien Meire, the evident Mexican stand-off that preceded settlement in the case of some suggests termination will not have been cheap overall.

Something similar is bound to apply to the long series of head coaches, managers and assistants who have been shown the door since 2014, despite signing contracts as long as three years in the case of Russell Slade (appointed in June, sacked in October).

This serial mismanagement - because the number and consistency of these terminations make it difficult to describe them as anything less - is bound to dwarf the locally generated commercial income lost by the club because of the related failures on the pitch.

To put it in perspective, the 5,500 decline in average attendances over the season just completed will have caused a drop of around £1.5m in net ticket receipts, while Charlton may struggle to reach £1m in season tickets for the 2017/18 season. Yet it’s extremely likely they have spent more just paying off contracted players they didn’t want since 2015 – never mind the non-productive wages paid to them while they were still on the books.

What won’t appear even in the 2016/17 accounts – and more importantly is likely to be a substantial drag on the team’s prospects for 2017/18 - is the ongoing cost of contracts that are of limited future utility to Robinson or his successors.

Thanks to various indiscretions, principally by Robinson himself, we now have a reasonable idea what these costs may be, ranging from Teixeira’s £600,000 a year wages, through Sarr and Kashi, thought to be on £400,000 each, and Novak on £300,000.

The other three strikers named, Ajose, Vetokele and Watt, are unlikely to be on less than Novak and quite possibly more. But even putting their combined salaries alongside Ceballos to total £1m, and then adding on-costs met by the club like employers’ national insurance, the projected amount due to these players is likely to be well over £3m in 2017/18. And that's before allowing for the fact that five of the eight run into future years as well.

For comparison purposes, the total budget for players’ wages given to Chris Powell in the League One championship season of 2011/12 was little more than £4m. If Robinson had the same sum, he'd have about £1m left to pay every other first-team player.

Next season’s bill might be mitigated by loaning some of the eight out but the status of the benefiting clubs to date makes it unlikely they will be footing all the bill. Indeed, when Roland Duchâtelet​ also owns the receiving club, as is the case for Sint-Truiden, where Ceballos spent the 2016/17 season and Vetokele arrived in January, the ultimate saving for the owner may be more than a book-keeping exercise unless others are displaced.

The high salaries, certainly by League One standards, in turn give the players concerned less incentive to move on and make it more difficult if not impossible to generate transfer fees.

Not only is paying such players off incredibly wasteful, it is also likely to be anathema to Duchâtelet, whose network model was based on recycling men like Tucudean and Watt to Charlton when they failed to make the grade at Standard Liege, as he has Vetokele and Ceballos.

From this it’s easy to see how Robinson may come under pressure to utilise what he has, especially by a regime that has demonstrated scant understanding of the importance of squad balance, team spirit or even character in its transfer dealings over the last three years. He may find that what he is able to spend on wages himself is reduced by the one-off cost of getting unwanted players out.

That’s not to say that the manager won’t be able to recruit some of his own transfer targets too.

Charlton may benefit financially from Burnley retaining their Premier League position after signing Jóhann Berg Guðmundsson and Nick Pope last summer. Ditto, potentially, if Reading win promotion via the play-offs with Callum Harriott in their ranks, Huddersfield with Tareiq Holmes-Dennis or Sheffield Wednesday with Morgan Fox. There is also a possible sell-on for Joe Gomez, if he leaves Liverpool, albeit one that would write off other potential add-ons related to his performance at Anfield. But all these possible - and in the case of the play-offs mutually exclusive - sums are one-offs, whereas new players are likely to be signed on multi-year deals, fees notwithstanding. Their wages thus recur.

Equally, it may be premature and unfair to write 2016 signings such as Ajose and Novak off. In very few if any of these cases can the blame for the situation be reasonably placed with the player. The injured Kashi, for example, has just disappeared off the fans' radar altogether - and maybe the club's too. Rumour has it Robinson has yet to meet him or Sarr.

The list is just a reminder that it’s somewhat naive to think that a new season under this regime can yet begin with a clean sheet, on or off the pitch. The mess is still too deep.