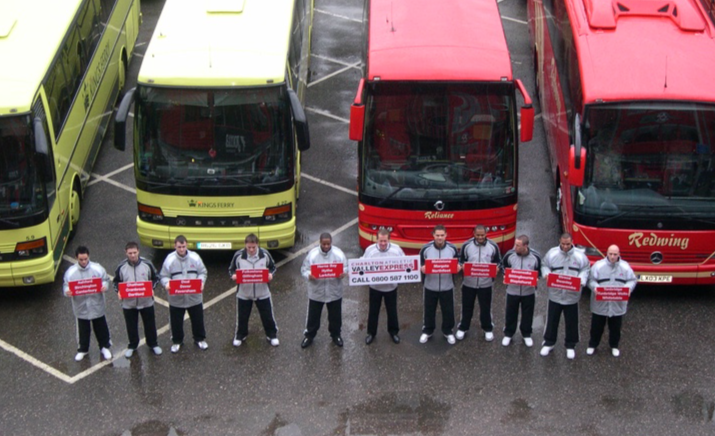 The strange and sad demise of Valley Express

Ten and a half years ago, on April 29th, 2006, Alan Curbishley took charge of his final match at The Valley, a routine end-of-season Premier League fixture against Blackburn Rovers, live on Sky TV. Except that it became anything but routine, because the long-serving manager’s departure was announced to the crowd in the build-up to kick-off.

Not all the home element of the 26,254 official crowd were regular Charlton fans, however, because the club had arranged 73 coaches bringing 3,000 additional paying attendees from across Kent, Sussex and even Essex, as well as more than 700 regular supporters.

Inevitably, perhaps, Charlton lost. But a year later, as Alan Pardew’s side slipped towards relegation, Valley Express brought in 4,155 people aboard 81 coaches for a match against Wigan Athletic. It was the last game the Addicks would win in the Premier League.

I was reminded of these huge numbers as a string of Valley Express coach stewards arrived in SE7 last Saturday for the game with Coventry City bringing dismal news of the rump of this once proud service. Fewer than 30 had travelled from the Maidstone area, which once boasted at least four coaches every match. There were numbers in the teens from Tunbridge Wells and East and West Sussex. Mini coaches and minibuses have replaced full-sized vehicles and even then the club cannot fill them. Downsizing vehicles doesn’t make a proportionate difference to hire costs anyway, because the driver and fuel expenses are much the same. Combining and truncating routes to reduce the number of vehicles used has also made some of the journeys more unattractive.

This decline isn’t just about being in the third tier. Long after most of the school groups and junior football clubs had melted away, Valley Express was still averaging 650 passengers for League One football in 2009/10 and beyond. Last weekend I doubt if it carried many more than 150, a pitiful amount, especially for a Saturday afternoon kick-off. It is hopelessly uneconomic on those numbers, even at £11 a head. The ticket revenue will now be far too meagre to justify the costs, especialy when the club is also selling adult season tickets at the ground that don't yield £6.50 net per match.

And now the most recent member of staff responsible for it, the capable and well regarded Steve Miller, has become the latest long-term employee to quit The Valley. That will be another blow.

I admit to taking a peculiar interest in Valley Express, because along with Wendy Perfect and others I built this service up from scratch in 2004. Indeed, she and I started it as an unpaid voluntary effort, but it took off so quickly that in 2005 it became part of our jobs.
The initiative really had its roots in 1992, when as supporters’ club officials we had put on coaches to Upton Park from Maidstone after the county town’s club collapsed in pre-season. Now the wheel has turned full circle, with long-established Charlton fans in that area abandoning the Addicks for the rejuvenated Maidstone United.

Three different fans’ groups, in Canterbury, Maidstone and Hastings/Bexhill, had taken up the challenge in the mid 1990s and run regular coaches to The Valley under their own auspices. It seemed to us, however, that these initiatives were driven by the commitment of individual organisers rather than the locations themselves. So what if the club started the same service in other areas? Why wouldn’t the demand exist there too? And it did.

Valley Express soon extended into Surrey, Essex, West Sussex and even Hampshire, some of which give the lie to the claim that it was there to poach other clubs’ support. Many of the exiled fans who boarded at Andover, in Hampshire, had already travelled 100 miles from Taunton and points further west just to pick up the coach. Some glory hunters they were.
Similarly, we ran from Brighton and Colchester, but had a policy of not advertising locally.

Why wouldn’t the club make it easier for existing and often non-attending Charlton supporters in those areas to get to matches, filling potentially empty seats in the stadium and more than offsetting the cost of the coaches with extra ticket revenue? Better still it heped build the far-flung fans into communities who became friends and looked forward to sharing their “matchday experience”, something even current owner Roland Duchatelet claims to regard as key.

The exception to the courtesy we extended to other clubs had to be Gillingham, because they were and are surrounded by Addicks fans. I live near Ramsgate; Gillingham are invisible here. But Thanet - about 50 miles east of the Medway Towns - is a big migration and retirement destination for SE Londoners, who have kept their Charlton allegiance. And the work we did with schools and coaches across East Kent is still paying dividends, in much diminished numbers, with a younger generation of fans along the coast who have since grown up and remain regulars.

There are few kids on the coaches today though. And it’s not just numbers that have been lost, but enthusiasm. Wendy and I may have done the planning up in SE7 until 2012, and we buzzed with excitement as the numbers grew and grew, but the matchday stewards were the people who made it work on the ground, building relationships and taking responsibility week after week. It was a collaboration and, for many, part of a misison to help the club.

Talk to many of these people now and they are sapped of enthusiasm, not just by the decline of the team’s fortunes but by the disregard they see in the way the club conducts itself. Beyond Miller, they feel Valley Express is seen internally as a burden, not an opportunity. They are especially demoralised because they have had a personal window from which to view the disintegration of the club and its support since 2014.

Some of the stewards are clinging on in the hope of better times – like a lot of other supporters. One well-known fan said to me on Saturday that he fears if the service is lost then even more people's matchday habits will be broken and the task of rebuilding it from his area will become an impossible one.

Gillingham chairman Paul Scally famously hated Valley Express and once threatened to run coaches to Priestfield from SE London. Sadly for him, they would probably have had to run empty or not at all. So it was the latter. But Charlton go there this weekend and he might well feel he has had the last laugh - although hopefully not by 5pm.

And I know too that some fans who live inside the M25 may also shrug their shoulders about Valley Express. Chief executive Katrien Meire’s response when Maidstone’s Sue Townsend put the argument to her about the lack of young people on her coach was to say there would be numerous kids from Greenwich at that day's Rochdale game – as if the two were mutually exclusive in a stadium that is usually two thirds empty.

Of course the club needs to build support in its local area, but the competition in London is phenomenal and other clubs there are much better placed to challenge the Addicks than they were ten years ago. It can and must do both.

Meire doesn’t and never has got Valley Express, like many other things associated with Charlton Athletic. She once told the Fans’ Forum that the coaches had to pay for themselves, even if the net result was a larger fall in ticket revenue than any subsidy.

But for those of us who created it, our pride in what was achieved is now mixed with real sadness about what is being lost, including the willingness of so many fans to go the extra mile, literally and figuratively, simply because they love the club.

Learned from their mistakes, have they? Pigs might very well fly. Kent and Sussex based Addicks, on the other hand, may soon find getting to The Valley rather more difficult.