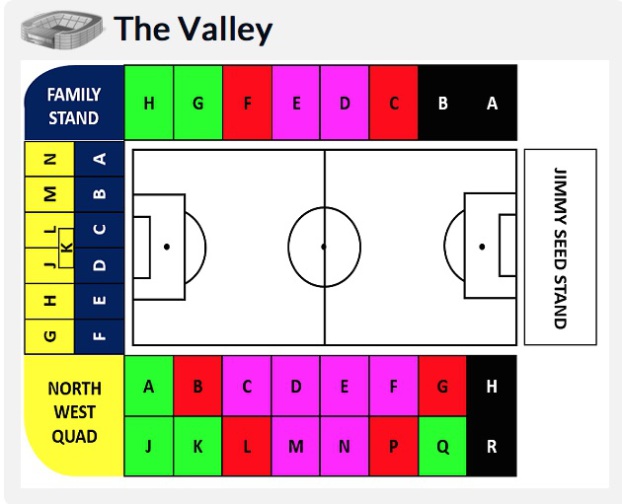 Addicks to charge more for some season tickets

Season-ticket holders in some of the most popular seating blocks at The Valley face price increases next season, despite Charlton’s continuing struggles on the pitch.

The prices had been due to be published by Charlton on Monday (March 27th), but were inadvertently posted earlier online by the club's deferred payment partner V12 Season-Ticket Finance.

Fans seated in east stand blocks D and E, and west stand C and F will see the price of their ticket rise by £25 to £500, while west blocks D, E, M and N fall by the same amount to bring them down to the same figure.

The same change applies to both adult and over 65s/U21s concessions, although U18s and U11s are unaffected. They remain £100 and £50 respectively in all areas except the family stand.

The changes are necessary because the club has moved away from a chaotically over-complicated structure that incorporated up to five different price points all accessible to the same ticket holders in the lower west stand, and four in the upper west and east.

Similar logic appears to have led to the bizarre decision to close many of the cheapest seats in those stands to season-ticket holders altogether, forcing the people who previously bought in east A & B, or west H, J, K, Q and R to pay a minimum £300 to renew, a rise of £25. West J, K and Q remain open at the higher price.

The big winners of the restructure are season-ticket holders in east stand block G, where the adult price falls from £375 to £300 for 2017/18, and adults in the family stand where the rate comes down from £275 to £175, in line with the lower north.

This may create further issues, however, with fans in the family stand potentially able to move unchallenged into the upper north, where adult seats are £150 dearer.

Despite the reduction in the number of price points, there also remains a huge incentive for fans in the east and west stands to cheat. Low attendances enable fans to buy £300 tickets and sit in £500 seats, a practice the club has proven unwilling or unable to tackle over the last two seasons.

It remains the case that some good seats in the east and west stands, notably east block G, are cheaper than places behind the goal in the upper north and NW quadrant, where an adult season ticket is £325.

Charlton season tickets remain relatively cheap by comparison with many other clubs, especially in League One. The offer of £175 season tickets in the lower north stand remains and provides exceptional value, if you disregard the quality of football in 2016/17.

However, the move to increase some prices and force a small number of fans to move seats is a risk given that the team is struggling to avoid the Addicks' lowest league finish for more than 90 years and the huge level of disaffection with the regime.

The club lost 40 per cent of its season-ticket holders in 2016 and is likely to suffer further defections this summer without current takeover talks reaching a successful conclusion.

Charlton will offer six months free access to premium internet content in return for early purchase, although the cut-off date is as yet unknown.

Any post-deadline increase is extremely unlikely to exceed £25 and many fans are likely to defer buying to await developments, including the not insignificant matter of the team securing League One status.

Price differentials quoted are against the rates charged in the same period in 2016.