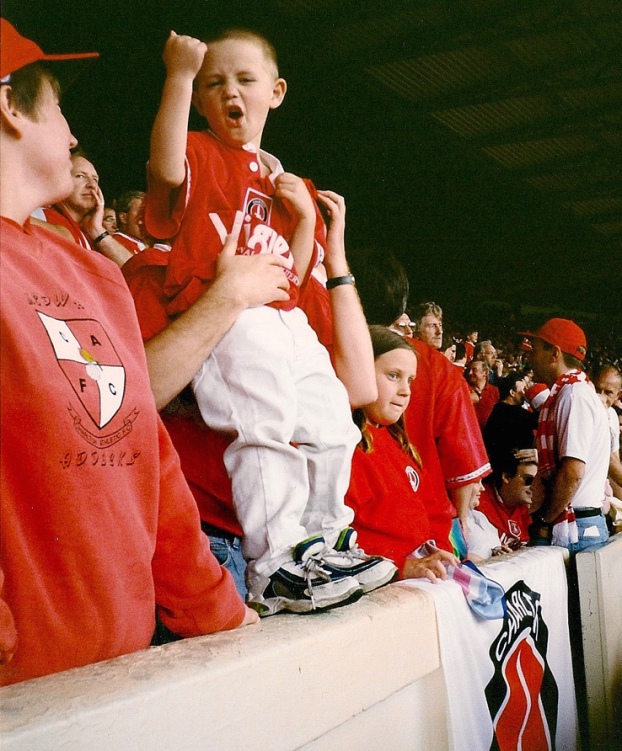 When we were young: this five-year-old was determined to enjoy the big day in 1998

The pain and the glory - Wembley 19 years on

For the best part of two decades, the final hurrah of the spring blossoms, the May Bank Holiday and the advent of the summer months, leads your average Charlton fan to ponder “that day”. It’s been that time again this week. You know what I’m referring to.

That one gloriously unbelievable afternoon when God or Fate or Destiny, or whatever you want to call it, tied a CAFC scarf around its neck and conspired to compel our football club to play, fight and scramble in a manner alien to most of us.

How often did Charlton Athletic come back from going a goal down three times in the very same match? How on earth did seven consecutive Charlton players manage to find the back of the net in a penalty shoot-out and somehow not blaze one far down Wembley High Road?

I feared the worst before we’d even kicked off. Somehow, the cheery refrain of Billy Cotton’s Red, Red Robin, a song that always leaves me misty eyed, seemed to be dwarfed by the dark menacing threat of Prokofiev’s Dance of the Knights. Perhaps if I’d known Prokofiev’s descendants were, almost unfathomably, fellow Addicks, I might have had greater equanimity. But I doubt it.

Of course, Charlton’s ability to rise to the occasion, to pull off a shock, to beat the odds on that sunny day at Wembley served as the perfect metaphor for the remarkable journey Alan Curbishley was about to take us on.

I’d like to think by the time Curbs was offered the door by plc chairman Richard Murray in 2006, the first in a death spiral of crap decisions that have beset the club ever since, the jaunty big band sound of our walk-on song had similarly started to instil a soupcon of trepidation into some of our opponents’ players, such was the challenge offered by our whole-hearted and under-rated first XI.

But May 25th 1998 was written in the stars for Charlton Athletic, as were many days to come. It will become like our 7-6 comeback of comebacks against Huddersfield Town 60 years ago this December, where the official attendance of 12,535 seems to have been out by at least 30,000, such is the number of Addicks who claim to have witnessed Johnny Summers’ heroics in person.

Sadly, no handy black and white YouTube video exists of that pre-Christmas thriller, but we do of course have plenty to enjoy of our day out in the sun in the late 20th century. It’s probably my imagination but the footage gets grainier by the year and the putty-grey three-piece official team suits get more and more dated. My unrequited endless bromance with the great man notwithstanding, Curbs still looks mustard dictating play in his waistcoat. Some of Clive Mendonca’s deft little spins and touches will never age.

Time has properly passed now, though. How many of the faces pictured staring down on English football’s hallowed turf that Bank Holiday Monday afternoon, have now faded into the past themselves? Every family, whether Addick or Mackem, will have lost loved ones in the intervening years. I went to that play-off final a young man and I write this, well, a little older.

The main protagonists on the pitch have had their ups and downs too. The life of a retired footballer, despite the rewards, always seems so precarious and some have seen coaching careers stutter and stumble, while others have fallen into financial problems or experienced unfortunate brushes with the law.

Whatever misfortunes have befallen some of our lads, and most probably some of Sunderland’s too, their place and stature in the collective Charlton memory cannot be tarnished or diminished. Let’s not forget that 12 months later, Charlton were relegated and sent back to the Championship, yet the likes of Mark Kinsella, Johnny Robinson and Richard Rufus didn’t just abandon the club and seek greater riches elsewhere, they rolled their sleeves up and drove us on imperiously towards the league title.

If it wasn’t for their loyalty and, let’s face it, the genuine ambition and business acumen demonstrated by chief executive Peter Varney and Murray at that time, as they preferred to keep the nucleus of a team together rather than cash in on our year in the top flight, then further great moments would not have lain ahead.

As a consequence, there are many fine wins to relive online and which can remind us of one of our club’s most purple of patches. Sometimes, during this unremittingly nightmarish era of Roland Duchâtelet’s ownership, I spend a few minutes turning back the clock to happier times and my younger days. Some Scandinavian magic from Claus Jensen, a storming surge forwards from Scott Parker, a bullet finish from Shaun Bartlett…

If you’d asked me a year or so ago why I do this, I’d have said these potted highlights act as a sort of footballing Prozac, giving me, and I daresay others, a timely boost and a vision of what might lie ahead once the misery of the Belgian regime is gone.

To be honest, my feelings are changing now. This week I replayed a 12-minute highlights reel of the play-off final and such glories, such players and such a manager seem a lifetime away. It’s like watching home movies of a departed loved one. All at once you get the warmth and affection for someone who has meant so much to you, and then the crushing realisation and pain of knowing that you will never see them again.

It’s not all bad. I can say I got to see a Charlton captain lift a cup in front of tens of thousands of delirious fans at Wembley Stadium after one of the most dramatic of matches. Not all football fans can say that, not even all Charlton fans. That one’s safe in the locker at least.  Not even Duchâtelet can touch that. 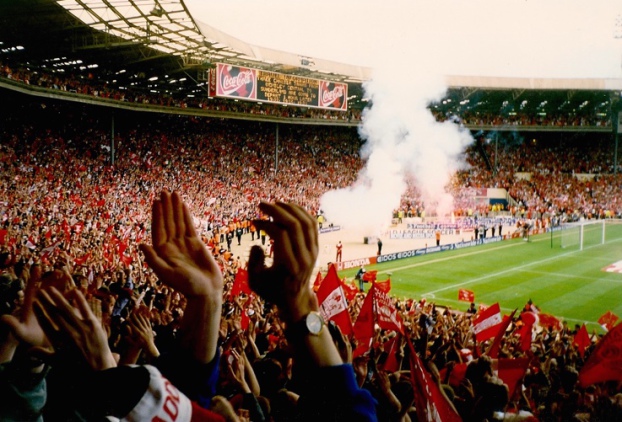 Big hand: Charlton fans celebrate winning one of the most remarkable matches ever seen at Wembley