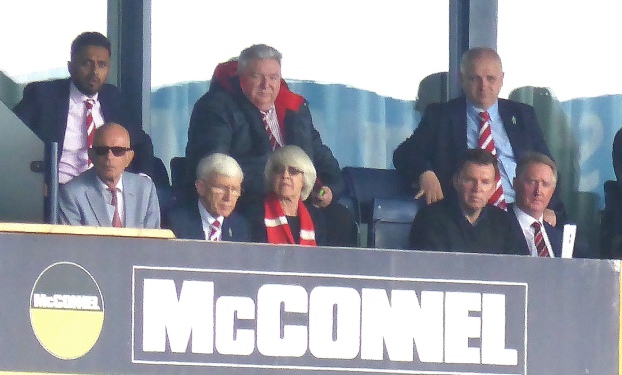 Aussie front man Gerard Murphy (front right) with the official Charlton party, including director Richard Murray and club secretary Chris Parkes, at the away Shrewsbury play-off game in May.

Time for the authorities to intervene at Charlton

Roland Duchatelet’s ownership of Charlton looks like ending, as it began, with a fire sale and a failure to communicate. Recently he pointed the finger at the club’s then staff for the shortcomings in the latter respect during 2014-2015. The Addicks’ current, largely invisible, head of communications, Tom Rubashow, might want to take even deeper cover.

Then again you would hope that Rubashow has had the balls to tell Duchatelet, making a rare visit to The Valley this week, that the club’s public position is hopelessly untenable and needs urgent attention. That, surely, is his job. If Duchatelet won’t let him do it, he should consider his own future. His predecessor Mel Baroni did and soon made her excuses.

It is almost six months since acknowledgement of the impending sale of the club was forced out of the Belgian businessman by the abrupt departure of chief executive Katrien Meire. Her position remains vacant, as some of us would argue it had been in practical terms since 2014.

The lack of leadership has now become more pointed still following allegations of rape made against two young Charlton players on holiday in Spain. While the club is not to blame for that and the alleged victim is the most important consideration, the players' situation and the potential reputational damage needs to be professionally managed at a high level. It cannot just be ignored.

For a while the club’s spokesperson was Richard Murray, the only other director, but after telling fans that February was the likely month for the sale and then that the price and terms had been agreed with two bidders at the end of that month, he has had little to add. Like Rubashow, Murray has gone missing in action. He should now make that permanent.

The only official updates since February have been to confirm caretaker boss Lee Bowyer in post until the end of the season, with the apparent endorsement of potential new owners, and a bizarre announcement that season tickets would go on sale if the takeover hadn’t been completed in the next seven days, a line which - perhaps inadvertently - suggested that the club's skeleton management was as much in the dark as supporters.

Instead the saga has staggered on into June, with no one telling fans anything on the record. Little wonder then that fewer than 5,000 have so far been prepared to buy season tickets for the 2018/19 campaign, now just seven weeks away. There is still no permanent manager and nobody knows if the interim will see squad building or further demolition work. It is no basis for Bowyer or anyone else to prepare for the new campaign.

The Australian consortium fronted by Gerard Murphy and headed up by businessman Andrew Muir broke cover in May, by appearing in the Valley directors’ box at the play-off semi-final. They have held at least one meeting with staff and third parties at the Sparrows Lane training ground about their plans for that site and the club has been actively involved in preparing the way with the EFL for them to take over.

Recent off-the-record briefings with the official sanction of the Aussie camp have painted a consistently rosy picture of progress, culminating in a series of headlines pointing to EFL approval of the new owners being the only remaining stumbling block.

Duchatelet struck a discordant note when he encountered protesting Charlton fans in Belgium, sticking to the line that there were still two interested parties, even though no one has ever identified the other group allegedly at the table - or more accurately hiding under it. But it's unlikely that the posturing has been limited to one side. Such is the nature of doing deals.

Where the two camps have completely parted company, however, is over the outcome of the EFL’s fit and proper person test. Last week claims began to emerge from the Duchatelet camp that the Aussies had failed to meet the necessary criteria. Briefing from within the league itself, however, appears to contradict this, as did the Aussies themselves.

Regardless, Duchatelet arrived in England and unilaterally sanctioned the immediate discounted sale of defender Ezri Konsa to Championship Brentford, who were able to secure a reduction in the undisclosed fee - believed to be £2.5m - by paying more up front.

Rather than closing the takeover deal, Duchatelet's activity at The Valley is understood to be focused on making more player sales and staff cuts to minimise his future losses. The explanation being given is that he has run out of patience with the buyers, because they have failed to satisfy the EFL.

Leaving aside the irony of his own shambolic tenure having been blessed by the league’s approval, this begs a number of questions.

1)    What is the actual position of the EFL on the Australian consortium, and if they have ruled against them can the basis of that be overcome? If the Aussie's approach is not realistic, why has Duchatelet entertained their pursuit of the club for more than a year?

2)    What is the status of Duchatelet and Murray’s second interested party, or was its existence just a convenient fiction to try to pressure the Aussies?

3)    If Duchatelet remains in charge, with no chairman, no chief executive, no finance boss and no permanent first-team manager, how can that itself be acceptable to the EFL, never mind the supporters?

These are urgent questions for the club, the EFL and the Charlton fans. They ought also to be asked by the local and national media and the local MPs, Matthew Pennycook and Clive Efford, whose constituencies include The Valley and the training ground. At the least, the MPs can seek and share the answers that fans need to have about the club's future.

Whatever the truth about the Aussies, whose credibility rests heavily on Muir’s wealth and reputation, since we know little else about them, it is now clear Duchatelet wants to sell the club and that almost everyone associated with Charlton wants him gone. There have been people willing to buy it off him since 2015.

The sole reason he remains in charge is that he wants to be paid much more than it is reasonably worth. He has spent four years pouring tens of millions of pounds down the drain through abysmal management and decision-making and still wants to be compensated for his own epic arrogance and foolishness.

On that basis, the current situation can be no one’s else’s fault except his, but the victims are the thousands of us who still care about the club. He may not be bothered about that, but others should be. It is now time for the football and political authorities to intervene publicly and do what they can to hold this dangerous idiot to account.