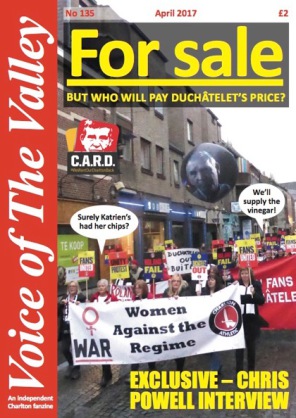 Charlton look set to celebrate December’s 25th anniversary of the historic return to The Valley in style - by announcing a takeover and the end of Belgian businessman Roland Duchatelet’s three-year, ten-month ownership of the Addicks, writes Rick Everitt.

Multiple independent and well-placed sources have confirmed to Voice of The Valley that due diligence on a potential sale has been taking place in recent weeks. And we were told by one of them on Thursday, October 19th, that a deal could even go through before the end of the next week.

Since April this year the frontrunners to take over the club have been the Australian Football Consortium. Their interest was first disclosed by Mail Online, with VOTV exclusively revealing the involvement of Australian businessman Andrew Muir - former owner of the Good Guys retail chain - in VOTV136, published on August 5th.

Details of the consortium undertaking due diligence in recent weeks remain sketchy, but we understand that former chairman and current director Richard Murray has been keen to play a role in the new administration and is likely to feature if the sale goes through.

The deal is understood to have been brokered by the Everton director Keith Harris, who has been behind numerous football takeoevers in the past. His involvement was first reported at the beginning of April in VOTV135, which headlined on the club being up for sale and was published prior to the Mail’s revelations.

It would include the acquisition of Charlton Athletic Holdings Limited, the entity that owns The Valley and Sparrows Lane, as well the football club itself. Suggestions to the contrary were a source of concern to some fans following the initial report in April.

Murray is one of seven members of the pre-2010 board of directors who between them are still owed £7m by the club. The loans are interest-free and only repayable on promotion to the Premier League or a change of control, which means any incoming owner would have to buy them out or secure agreement to roll any or all of them over before proceeding. 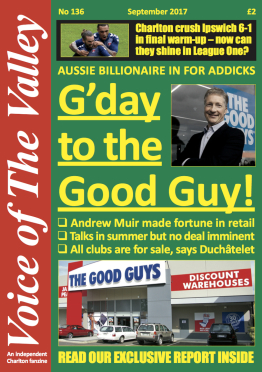 As well as Murray's £2.6m, Derek Chappell and Bob Whitehand each have £1.2m outstanding, Sir Maurice Hatter £1m, David Hughes £500,000 and David Sumners and David White £250,000 each. However, it is unlikely in my view that Murray's primary motivation is financial.

A bigger stumbling block is the £50m-plus due to Duchatelet's Staprix company, albeit this includes £18.6m of Charlton debt that he took over at the time he acquired the club in 2014 and which was effectively the cost of buying it, as well as 3% interest per annum on that sum and the subsequent loans.

Unlike in previous Charlton takeovers there is no outstanding bank debt, which removes another potential complication. In effect the bank debt Duchatelet inherited has been transferred to Staprix.

I can report with certainty that the due diligence is at an advanced stage. While that does not guarantee a deal will be concluded or any timeline, it will necessarily have required extensive co-operation from the football club, which is unlikely to have been forthcoming without significant proof of funds and an indicative agreement on price. In short, the approach has to be a credible one and of interest to Duchatelet simply to have got this far.