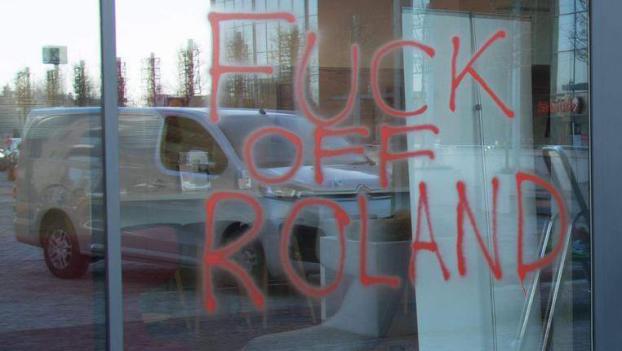 Graffiti painted on Duchatelet's property overnight on Sunday, according to Belgian media

Duchatelet says he will give club away "for free"

Charlton owner Roland Duchatelet made a surprise appearamce on JIm White's talkSPORT show this afternoon (February 26th) following reports in the Belgian media of two unknown individuals, assumed to be Charlton fans, having made a graffiti attack on his property in the early hours of Monday morning.

In a bizarre interview, Duchatelet suggested that the EFL should not have allowed him to buy the club in 2014; that he would not sell it to a foreign buyer as that would be unfair on them; that the deal which he reached with an Australian consortium in February 2018 may have foundered because of a single matchday protest six months later; and again insisted that he was not to blame for damage he claims was done to his reputation by the decisions of communications employees he inherited from the previous ownership.

Former Crystal Palace owner Simon Jordan, who was in the studio, later described Duchatelet's arguments as "laughable" and "contemptible". However, they appear to preface an offer to be made around the future ownership of the club at Wednesday's fans' forum meeting. This is a transcript of the interview.

Roland Duchatelet: Many buildings and houses, private houses of people, have been damaged by this graffiti. The whole system, in my mind, with football in England is wrong. They should not invite people like myself to become owners of clubs like Charlton – or any other club, by the way. In fact I do spend maybe two per cent of my time on Charlton, I have so many other things to do - and I’m not the only owner of a big club who doesn’t have the time to take care of this. Then if I have to take care of this kind of a nuisance… it shouldn’t exist.

Jim White: Roland, while I sympathise with you over what happened in the early hours of Monday morning, if you didn’t have the time for Charlton. why did you buy it?

RD I didn’t know at the time what in fact was going to be the case. That’s the reason I believe the EFL should not sell football clubs to foreign owners who do not know these kinds of things can happen. For my life, it’s been a major mistake to do that. So it’s annoying me and it’s not nice. I think it’s totally wrong that foreign people get involved with English football.

Simon Jordan: I used to own Crystal Palace so I have a degree of empathy for you and the situation that you find yourself in, but ultimately do you feel that you’ve been helped… because one of the things that English football fans have is a great deal of tribalism and passion to their clubs and of course that’s part and parcel of football per se.

I’m not looking for you to blame people but I am trying to see what you’re saying because ultimately you’re in a very difficult position. I don’t think it helps you when you come on and say that you only had two per cent of your time, because that’s not going to play well with Charlton fans. They are going to say, who cares?

It’s not the EFL’s responsibility. If you’re a fit and proper person you can buy whatever you want. Ultimately, a lot of it’s PR. Charlton seem to be in the ascendancy as a club now, coming back up the pyramid. This vitriol that’s being levied at you seems to be so unnecessary, because ultimately you are trying to get out of this club. What can you look at and say maybe I should have done differently and what I can do to make sure that at least I get away with this with the least amount of damage?

RD: Well, the thing which happened is that my press people were very wrong at the time in managing the situation. That’s the main thing I can say. So in that sense… the thing is you cannot control everything… of course every club makes mistakes, every manager makes mistakes, so that’s not the problem. The problem is that the situation is just not healthy. It’s just not healthy the way it is approached and I don’t think foreign owners which have a lot of money should be involved in English football. I think they should leave these people alone. Leave me alone, that’s what I say. I didn’t ask for this. I wanted to have a nice club. Also, the thing is, it’s not the fans in general. There’s a few fans… I don’t know how many… but anyway there are in any case two who did that now.

JW: What this week? You understand there were a couple of fans wearing masks and wigs?

RD: Yeah. Two fans… two people. It could be fans, I’m not sure, but they were pretending in any case in what they did.

JW: Roland, were you at your home at the time?

JW: So you came back to discover this?

RD: Well, in fact, with regard to my home, my wife discovered it.

SJ: Given the situation, we are where we are. You’re a big boy. You don’t like the temperature of this, which I don’t blame you. How does it get resolved? You’ve got the club up for sale. You’ve got people that are going to try and capitalise on the distress that you have and ultimately the reaction that it’s causing in you, but you have an economic value on this football club. Is it the economic value that you are putting on it that is stopping it from being sold or is it a consortium that don’t really have the money or are trying to get everything for nothing and ten per cent off? Why isn’t this deal happening, Roland, so that you can get away from this miserable existence?

RD: In my mind what is happening is that due to the protests which happened in August certainly that has put off to some extent some of the potential people who would be in the investor club sandwich – basically you talk about an investor club, eh – and due to this they would probably put themselves in my shoes and say that when they are the owners what is the guarantee or the likelihood even that they will do the same to me?

SJ: Roland, that’s not true. People look at things differently and reality is that it will come down to money. This will come down to whether they have got the money to buy this football club from you and whether what they are offering you is what they are prepared to accept. They won’t look at you and go, oh, hang on, you’re a cautionary tale. Something’s happened to Roland. They will look at you and say you’ve made mistakes, you’ve alienated yourself. We’re not going to do that, we’re going to galvanise the fanbase. I’ve bought and lost a football club, so I understand this. So, it must be more to do, Roland, with the economics.

RD: No, not at all, because we had an agreement since February. There was an agreement with both parties on the economics.

SJ: So they write a cheque out and it’s no longer yours?

RD: Well, we made an agreement, we invested another £100,000 more in legal fees to make the agreement and so forth, then they just had to submit the agreement to the EFL and the deal was done.

JW: As I understand it, Roland, there’s a fans’ forum this week. From distance you obviously won’t be there. You’re going to come up with a proposal of some sort, are you?

RD: We are planning to… I think the basis of the way this system works in England is not healthy for foreign investors and that’s my main concern. Whether I am the foreign investor, why should I now try to bring another foreign investor into the business? That’s not my mentality, I am against that…

SJ: Roland, I don’t want to beat you up, but I’ve got to say it, mate, that’s utter rubbish. You’ve got many, many owners in English football – and I’m a former English owner that laments the fact that we have to get foreign owners – many, many foreign owners are enjoying a different relationship. You picked the wrong club, with the wrong culture, with the wrong outlook. You can’t look at it and say that it’s the EFL’s fault. Roland, I’m sorry, mate, it has to be your fault. It has to be your relationship with the club, your appointment of your PR, your appointment of chief executive. You’ve let this get out of control and now it’s got out of control and these people are stepping over the line and doing dreadful things to you and yours around you.

RD: Yes, but you cannot blame also these young people, by the way, who are in charge of the press. They were, in fact, those…

SJ: No, I’m blaming you, Roland, because they are your people.

RD: No, they’re not my people. They were there when I bought the club.

SJ: But you let them speak for you.

JW: Roland, you and I spoke about this in Brussels and now this unfortunate, this dreadful set of cirumstances with vandalism at your home has happened and at your business premises. Here’s the situation. You need to sell. Now live on talkSPORT today, give me a figure, because God knows this will get out and someone along the line will say, Duchatelet will sell for x. What would you take to sell Charlton.

RD: In fact we give the club for free and in addition they get another £20m and if you just look at the value of the land and the buildings.

JW: You what? You’d give the club away for free?

RD: Yes, because in fact if you think that, if you’re aware that the value of the land and buildings is like… it’s so high… fine, it’s not very high comparatively to what you can pay and have to pay for other things…

SJ: They are going to pay you for the stadium and the land, right, and that has a number, and that’s what they are negotiating with you on?

SJ: I bought a football club.

JW: What did you pay for it?

RD: Well, we have valuations of the stadium and the land and I’m not going to discuss this any further in this way. We also sign an NDA and so forth and I think it’s not in the media that we have these kind of discussions, but basically what I say is that with the conditions to buy the club today we give the club for free. It’s really from that perspective we give the club for free. If you were, we want to have…

JW: Roland, what I can say? Very, very distressed to hear what happened at your home and the business premises. I know the Belgian police are investigating it and we’ll watch it closely. But Roland, we hope you get a sale, obviously. Charlton fans obviously hope so. I hope from your point of view that you get a sale shortly. I’m indebted to you for coming on at a difficult time and talking to us live on talkSPORT.