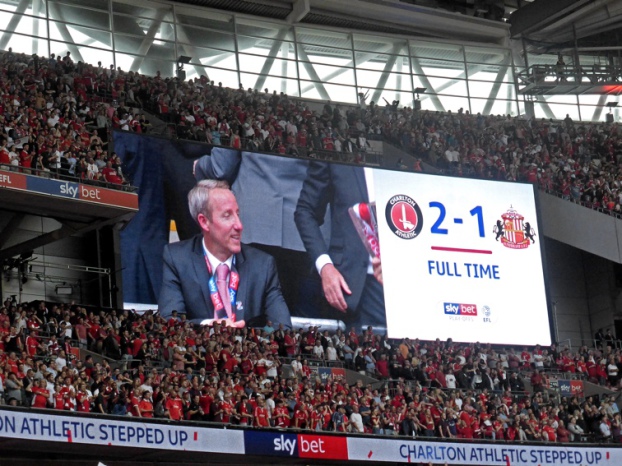 Duchatelet's window of opportunity may not last

The next two months represent the best window of opportunity Roland Duchatelet is ever likely to have to maximise his return on the sale of Charlton Athletic.

Lee Bowyer’s achievement in restoring the club to the Championship at Wembley on May 26th immediately enhanced the value of the club, simply by returning it to the next level to the Premier League. But it will not retain peak value for long. The scale of the financial challenge facing the Addicks back in the Championship will either stack up debt - which the Belgian will have to finance - or the limit to the available budget will create an increased risk of the team falling back into the third tier.

The hazards ahead can be glimpsed by looking at the relative fortunes and spending power of clubs who have climbed out of League One in the seven years since Charlton last won promotion to this level. Chris Powell’s newly promoted Charlton side finished a very respectable ninth in 2013 after storming to the League One title the previous season. That remains the fourth highest initial finish of the 21 teams promoted since 2012. Only Brentford (fifth in 2014/15), Wolverhampton Wanderers (seventh in 2014/15) and Millwall (eighth in 2017/18) have done better.

In that same period five promoted clubs have been relegated straight back to League One, with an average Championship finishing spot of 16thin the first season after promotion. With the exception of Wigan Athletic, who managed to get relegated to League One twice while receiving Premier League parachute payments (as Charlton had in 2009), the newly promoted clubs that immediately went back down were predictably those with the smallest wage bills.

This is where the Championship's rampant wage inflation bites. Charlton’s 2012/13 wage bill of £12m was nearly two-thirds of the divisional average of £19m at the time, and Powell’s side comfortably outperformed their spending power despite internal turmoil and heavy financial constraints. Indeed, the Addicks spent £14m on wages getting relegated in 2015/16 under Duchatelet.

The problem for Lee Bowyer is that in the intervening years average Championship wage costs have soared by more than 50 per cent to over £31m in 2017/18*, while Charlton’s own expenditure in this area shrank to £10m in the same year.

A standstill budget, even allowing for the headroom created by the departure of big-earner Igor Vetokele and senior players like Ben Reeves and Mark Marshall, would represent a much bigger challenge in the Championship that it did in League One, where two-thirds of clubs are run on a shoestring.

The club can now expect to see its revenue grow by £6m-£8m as a consequence of promotion, mostly from central television fees and Premier League solidary payments, but it is already running an operating loss of a similar magnitude.

In 2012/13 Charlton ran an operating loss of £7.4m and made an overall loss of £6m after player trading and interest charges.

If Duchatelet continues to own the club next season he must decide whether to use the extra money to plug the gap or increase spending on the team – and if he does the latter his overall outlay will continue to rise. If he tries to break even, he will be putting Bowyer in a similar position to Doncaster, Rotherham and MK Dons, not the one that Powell had to deal with in 2012/13.

The manager’s own comments to the South London Press suggest the latter.

“Regarding building a squad, it is going to be tough because I don’t think we’re going to have much money,” he said. And in remarks to the official website: “It is a small budget. We’re going to have to duck and dive like we did last season and bring in the best players we can on the budget we have. We’ll work our hardest, like we did last year, on trying to achieve that, but it’s going to be difficult… we can’t compete financially.”

Most fans would understand that in the context of the top half of the division, but there were only seven clubs who spent less than £20m on wages in 2017/18 and three of them are no longer in the division.

Something else that is sharply different from Charlton’s previous return to the Championship is that Powell had a settled team. Indeed, more than three quarters of first-team starts in 2012/13 were by players already on the books in 2011/12.

The Addicks’ high dependency on loans and short-term deals in 2018/19 means that Bowyer will not have the same luxury. The manager’s performance and growing reputation may assist in recruiting quality replacements for the new campaign, but that doesn’t mean they will come as cheap. Existing players like Wembley hero Patrick Bauer will be able to command higher wages if retained. Others like Joe Aribo may free up cash through compensation.

Of course, it’s not all about money. Newly promoted Millwall’s eighth-place finish in 2017/18 was achieved despite spending only £13.4m on salaries, although the remorseless financial logic of Championship football asserted itself with a 21st-place outcome in 2018/19.

Huddersfield Town, who went up with Charlton in 2012 via the play-offs, won promotion to the Premier League via the knock-out route in 2016/17 despite spending only £16.5m on wages, which was the fourth lowest outlay in the division.

But mainly due to increasing parachute payments the trend is entirely in the other direction. Wolverhampton Wanderers, Cardiff City and Fulham each spent £50m on wages getting promoted in 2017/18 and Aston Villa spent £73m missing out. And that’s not even taking into account transfer fees.

The idea that Bowyer could challenge for promotion to the Premier League on a wages budget of £10m, which also includes the cost of employees in the academy and on the administrative side, is clearly fanciful.

It also means that Duchatelet, if he fails to sell the club now, is likely to remain locked in a spiral of ever-increasing debt and will inevitably be even worse off when he does eventually hand over the reins.

While all the indications remain that the Belgian is still holding out for an unrealistic price, one stumbling block to a deal has been removed by promotion. Duchatelet had previously been demanding a success payment when new owners got the team out of League One, something that at least one interested party was not prepared to entertain. But whether that is enough to unlock a deal remains to be seen.

Unfortunately, all previous experience points to the owner running the club on the basis of wishful thinking rather than business logic. Bowyer, likely to sign a new two-year deal himself regardless, will know his chances of keeping the team up may hinge on a more realistic approach. Perhaps Wednesday’s (June 5th) scheduled fans’ forum meeting will provide an insight into whether one will be forthcoming.