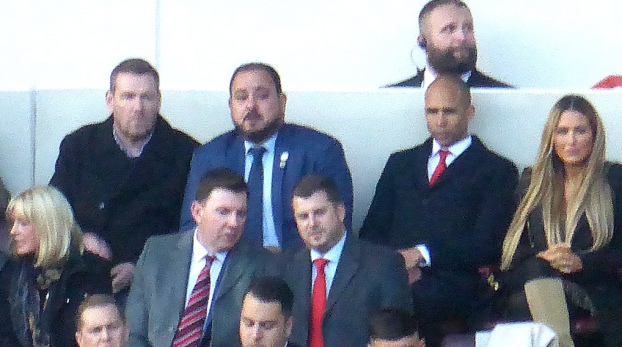 Unhappy: Tahnoon Nimer, in blue suit, at the Barnsley game, flanked by Matt Southall (next right). Lee Amis (red tie) is in conversation with director of football Steve Gallen

The shit hits the fans as ESI takeover falls apart

Even by Charlton standards, the public implosion of East Street Investments was spectacular.

It had been apparent for some time that all was not well with the takeover of the club, first announced on November 29thand apparently confirmed on January 2nd. But the Instagram accusation on Monday night by ESI’s majority shareholder Tahnoon Nimer that chairman and minority shareholder Matt Southall and his associates had “raped” the club by diverting money to fund Southall and friends’ own lifestyle marked the detonation of a situation that had been building for weeks.

Southall responded overnight with a club statement claiming that Nimer had never been approved as an owner by the EFL and hadn’t put any money in anyway. He said the EFL had never been satisfied by the source of the Abu Dhabi resident’s funds and that this is what had limited the club’s acquisitions in the transfer window.

NImer has now hit back with his own statement, explaining that he is taking legal action to remove Southall and detailing that the latter’s inappropriate expenditure has included “leasing expensive flats, buying expensive cars, promising large fees to agents and even personal expenses, instead of fulfilling the squad and manager’s urgent needs".

The football world has been awash for some time with stories about ESI’s lack of money and Voice of The Valley was told on Saturday that Nimer had sent an associate from Abu Dhabi to scrutinise Southall's activities. Nimer now claims that the club was under a transfer embargo because of Southall’s failure to file certain documents with the EFL.

Unfortunately for Southall, it was Nimer’s supposed financial heft and business contacts that provided the chairman with credibility in the first place. Without that, Southall’s string of previous unsuccessful business ventures, his claims in court of poverty only last February, and his links to the previously banned Watford owner Laurence Bassini – all documented by Voice of The Valley on Boxing Day - would surely have rung more alarm bells.

For me, the involvement of the former estate agent and Charlton fan Lee Amis, introduced as “a consultant” and a constant presence around Southall, was a huge red flag.

Amis had been part of the consortium with the convicted fraudster Paul Anthony Garland and Sebastien Sainsbury which tried to buy the club from chairman Richard Murray in 2010. That interest was eventually seen off by former chief executive Peter Varney, but it placed a huge question mark over Amis’s judgement, regardless of anything it said about his integrity.

Now he was back at The Valley, driving an expensive club Range Rover and basking in the spotlight along with Southall and others, like kids left in charge of a sweet shop. But what, exactly, was Amis supposed to be bringing to the table?

His early involvement was confirmed by former directors who were contacted by him to discuss their £7m outstanding loans, discussions which are now mired in dispute because the loans have not been repaid and there has been an attempt by seller Roland Duchatelet to supersede the legal charges that protect them.

Some mainstream journalists who, like me, had looked into Southall were surprised when it was announced on January 2ndthat the takeover of the football club had been completed. But understandably, perhaps, after six years of Duchatelet, there was no appetite among supporters generally to entertain any concerns. Southall was personable and approachable, in marked contrast to Duchatelet. And there was also a genuine willingness on all sides to give the new man the benefit of the doubt. But the doubts kept on growing.

It soon emerged that ESI had not yet bought the freeholds of The Valley or Sparrows Lane, a message that was mangled by heavyweight PR adviser Paul McCarthy into a series of confusing claims, including that they owned the buildings in SE7 but not the car park.

This was glossed over with an apparent off-the-cuff commitment to spend £15m on redeveloping Sparrows Lane in the summer, with Southall waving around old plans approved under Duchatelet as long ago as 2015 at a meeting with fans' groups, including the Charlton Athletic Supporters' Trust, who reported on it enthusiastically.

The club is supposedly committed to buy the freeholds within six months, which didn't tally with the argument that they hadn't completed due diligence. For fans who know Charlton history and what happened in the 1980s, this was alarming news.

More immediately troubling was a public spat with manager Lee Bowyer, who directly contradicted Southall’s claims in a video interview that they had agreed to defer talks about his new contract until after the transfer window with a rebuttal given to the South London Press.

Southall immediately announced that ESI were offering Bowyer a five-year-deal, which in turn the manager batted away in statements to the press. He eventually signed for three years.

Voice of The Valley understands that Bowyer was reluctant to sign at all without assurances regarding squad strengthening in the January transfer window.

In the event, Charlton’s recruitment was minimal with three loan midfielders signed on transfer deadline day, none of whom were even utilised off the bench as the team slipped to a disastrous home defeat by relegation rivals Middlesbrough last Saturday.

That failure was telling, because ESI had argued that they had to complete the takeover without the freeholds because of the need to focus on the transfer window rather than due diligence on the land transaction.

Now Southall appears to be saying that they didn’t have the funds for transfers because of Nimer’s status with the EFL, which in turn begs more questions about the talks they held with Peterborough United over Marcus Maddison and Bristol Rovers about Jonson Clarke-Harris.

Southall's claims about the limited damage likely from relegation and his management team's ability to boost the club's commercial and ticket income have also lacked credibility to those familiar with the business.

Meanwhile, there are questions for the EFL about how it failed to offer any public challenge to the narrative being provided by the club that the takeover was complete.

Southall has told staff that the club is solvent and can continue to trade as normal, which may be true because of substantial central payments received in January, ticket receipts and a windfall from the transfer of former player Tariqe Fosu from Oxford United to Brentford.

By operating in the Championship with a League One budget – and selling Anfernee Dijksteel to Middlesbrough last August – Duchatelet had likely moved the club close to break even this season, meaning substantial day-to-day funding may not be required in the short term.

However, if the Addicks are relegated, which looks the increasingly likely consequence of this parsimony, they will forfeit around £7m in revenue straight away and there are no significant budgets left to cut. Even in the Championship there will be increased wage demands.

It appears that Southall’s business plan all along was to sell on a tranche of shares in order to help fund the freehold purchase. If he remains at the club that must now be in extreme doubt, along with Charlton’s ability to trade over the summer. After all, if Southall has been unable to attract investors to date, the latest publicity is hardly going to make that easier.

The question, ultimately, could be whether Duchatelet will finally hand over the freeholds for a more realistic £25m-£30, whether he is willing to see the club go out of business as a consequence of his intransigence and try to redevelop The Valley, or if someone will pick the club up and potentially call his bluff by moving matches and training elsewhere.

Southall and friends seem likely to be gone in short order, whatever bluster and bravado they put out now. What comes next, whether it is Nimer or one of the multiple previously interested parties, remains to be seen. The EFL must take its share of the blame for having failed, once again, to intervene effectively, even though it has now confirmed the deal was never ratified. Regardless, it has presided over yet another sorry mess.

Nice car: Southall's £100,000 Range Rover, which according to Nimer was purchased using club funds. There are at least three similar cars that have been driven by his associates and seen parked at home matches