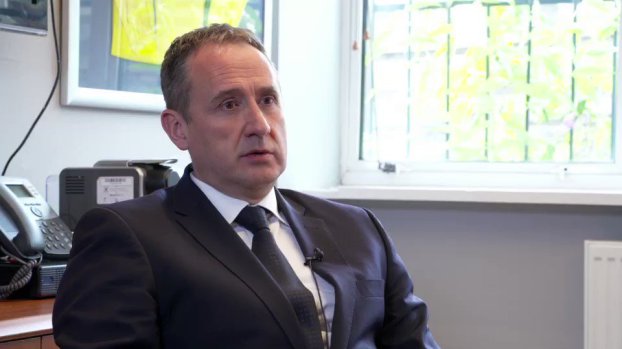 Complaint: the Solicitors Regulation Authority is investigating claims that Chris Farnell has a conflict of interest

“I, like all Charlton fans, are absolutely devastated,” claimed lawyer Chris Farnell somewhat ungrammatically on talkSPORT on Thursday, after watching the club slide disastrously back into League One with a 4-0 defeat by Championship title winners Leeds United.

Apparently, the bloke beside him at Elland Road, Paul Elliott was also “devastated”.

And perhaps they were. It is undisputed that Manchester businessman Elliott has yet to finalise the purchase of Addicks owners ESI, despite claims that a takeover had been completed on June 10th. However, the former bankrupt ought to know that Charlton’s combined operating losses during their three most recent seasons in League One were a slither under £40m, far more than they historically lose in the Championship.

It’s also the case that if the ambition was to flip the club on in short order then its attractiveness to any other buyer had just taken a significant hit. Relegation equals a substantial financial blow that no one planning a future for the club can avoid.

But it’s still a stretch to imagine that either he or itinerant advocate Farnell had any significant emotional investment in the team’s football fortunes. Indeed, the claim that they do is as insulting as it is hollow.

A couple of hundred miles away, in some cases less, thousands of genuine fans were grieving over the latest twist in a horror story that now threatens to end the club entirely.

Their pain is real. For them it is far more than a business setback. The fact that an obliging media platform is provided for these charlatans is grotesque.

Elliott, it is claimed, helped pay the wage bill in May and June, but he will not own ESI and therefore the club until and unless the EFL give approval to the takeover. In order to get that he will need to have shown source and sufficiency of funds to complete next season. That is likely to be an eight-figure sum. It has already proved beyond Tahnoon Nimer in 2020.

It takes an even bigger leap of imagination to believe that money injected already can be anything other than a loan, whether he is the source or not. The belief around the club is that the funding comes from the Egyptian Mohamed El Kashashy, who has also been to see the team in recent weeks. Either way, the question becomes what it is secured against and on what terms. The obvious answer would be incoming transfer payments.

For starters there’s an anticipated early windfall from the sale-on of striker Karlan Grant by Huddersfield Town. The expected departure of player of the year Dillon Phillips, plus others, such as emerging talent Alfie Doughty, would also help balance the books. But it is a given that Charlton will lose many millions as a result of relegation, if they survive at all.

Crestfallen manager Lee Bowyer has already had a £750,000 compensation payment placed over his head by someone and seems unlikely to stick around for further punishment.

Indeed, the playing side is likely to disintegrate rapidly with a continuing EFL embargo restricting the club’s ability to offer contracts even where existing players are willing to stay.

With seven weeks to go until the anticipated start of the League One campaign on September 12th, Charlton look like being reduced to a senior squad of barely a dozen. There is a huge rebuilding job to do and no time to waste.

That only serves to highlight the peculiar lack of urgency reflected in a statement of boilerplate inanity posted on the club website in Elliott’s name on Friday.

“We are still awaiting EFL approval of the change in control but once that comes through we will be in a position to outline our plans and sit down with fans to talk openly about our intentions,” it claimed.

“Our immediate plan is to support Lee Bowyer, Steve Gallen and the footballing staff in putting a squad in place that gives us the best opportunity for an immediate return to the Championship.”

If you thought that sounded familiar, it’s more or less what chief executive Katrien Meire said after Charlton last went down in 2016. And the next season the Addicks finished 13th.

Those heavy operating losses, linked to running a category two academy and the fixed running costs of the 27,000-seater Valley, as well as player wages, mean there are only two viable routes to riches for owners of clubs like Charlton: one is to take the club to the Premier League and the other is property development. Neither will be easily accomplished here, whatever illusions successive owners have had about the latter.

In fact, there’s nothing preventing Elliott setting out his intentions now or indeed explaining what on earth would motivate someone with his lack of background in football or Charlton to get involved. His reluctance to do so only adds the impression that he is a placeholder, there only because someone has to be to give the appearance of interest. There is no public evidence that Elliott has the personal resources to fund even a non-league club.

Then again Charlton fans are all too familiar with the concept of a chairman who isn’t what he seems. That came not just in the shape of the risible recent pretender Matt Southall, but 2010-2014 incumbent Michael Slater, memorably described by his co-conspirator Tony Jimenez as a “method actor” in an email later disclosed in court.

By comparison Elliott isn’t even putting up much of a performance. Neither can we put much weight on evidence of the man vouching for him on talkSPORT. As ex-Addicks comms staffer Jimmy Stone has pointed out, this time last year Farnell was pushing for the EFL to give Gustavo Benidito, “a Brazilian multi-millionaire pastor”, the opportunity to take over Bury. The lawyer complained to the BBC’s Dan Roan that the EFL wouldn’t entertain his bid, which apparently was forthcoming on the basis that he knew the club’s goalkeeping coach.

At least in that case the supposed saviour turned out to have some football background – as the founder of tenth tier Fire United, who play in the Eastern Counties Division One South and operate from an address in Lewisham.

Clearly, any opportunity for Gustavo to join Elliott’s consortium should not be overlooked, and to judge from his previous interest a requirement to travel to Manchester for board meetings should not be an obstacle either. He could, at least, offer up prayers for the club.

Farnell himself is now the subject of an investigation by the Solicitors Regulation Authority, which confirmed on Friday that a complaint by Charlton fan Daniel Sayer - that he has a potential conflict of interest around ESI - does meet the required threshold to move forward.

Companies House records also confirm that he passed control of another business, Lex Dominus Ltd, to Elliott at the beginning of June.

Formerly Southall’s lawyer, Farnell was appointed by majority shareholder Nimer to represent him in March. He now says that the latter received independent legal advice in respect of the sale of ESI, and that his work for Nimer is in relation to the ongoing dispute with Southall.

However, it remains unclear what role the lawyer played in discussions with Laurence Bassini, who agreed heads of terms for a sale with Nimer in April, or Swansea director Huw Jenkins, another former Farnell client, when he discussed a deal in May.

Meanwhile, former chief executive Peter Varney, who is allied with businessman Andrew Barclay in a bid of their own, is adamant that Farnell introduced himself to him as representing Nimer, and he continues to be presented in the media as “Charlton’s lawyer”.

Doubtless the SRA will be better placed to understand the propriety of it all than we are, but it is nonetheless intriguing that they didn’t dismiss the third-party complaint out of hand.

You wouldn’t, of course, necessarily blame a family lawyer for marital strife if they frequently turned up in the divorce courts, so it’s perhaps unfair to judge Farnell by the long list of football controversies with which he has been associated.

Even so, he seems to have had an unfortunate list of clients, what with being linked to disputes at Swansea City, Bolton Wanderers, Blackburn Rovers, Leeds United, Wigan Athletic, Bury and Salisbury City.

Sadly, the last two had to drop out of their respective leagues altogether, despite his efforts.

The fear for every Charlton fan now must be that the Addicks go the same way. And the longer that the EFL fails to make its own position clear the greater that risk becomes. It has already written to Charlton asking for assurances that Elliott is not currently involved in the running of the club.

As Eltham MP Clive Efford said in the House of Commons last Tuesday: “Some dubious characters have got involved with the club, separating off the ownership of the ground and training ground, and undermining the future of the club.”

Both Efford and Greenwich & Woolwich MP Matt Pennycook have also written to the EFL demanding early answers. It will be no good the league turning down Elliott in a month’s time. If that is going to happen it needs to be done this week, not least because some fans are buying season tickets for matches that may never take place. They could lose their money.

Better that then club goes into administration, from which it will certainly emerge, than it is allowed to slide into oblivion though official indecision and inaction. The current trajectory is only encouraging the theory that some involved would like to see The Valley fall vacant altogether.

If this saga does end with the Addicks expelled from the competition, whether by accident or design and just a year after the same thing happened to Bury, it will surely be the final whistle for the people running the EFL too. Unfortunately, that won’t be any consolation for the people who really care about Charlton. They will be the ones who are truly “devastated”.

VOTV160 will be published in August. It will be available to order on this website soon.

Listen to @Chris_Farnell’s answer when he was asked ‘why a Brazilian multi-millionaire pastor, would be interested in saving Bury FC?’ last August and then tell me you trust him. #cafc pic.twitter.com/LmnVqG0LN6