Charlton fan ZAKI DOGLIANI on his reaction to the appointment of the club's latest head coach Guy Luzon, whose first game in charge has been delayed by work permit problems 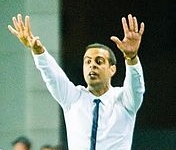 “When Sven was coach of Man City, I visited the club one week.”

That was how Guy Luzon described his experience of English football at the press conference unveiling him as Charlton head coach.

In fairness, he also mentioned that he had watched Chelsea and Liverpool play, but that will hardly reassure Addicks fans, who subject to work permit problems being resolved will first see the 39-year-old Israeli at The Valley when Charlton play Rotherham United at the end of Janaury.

Chief executive Katrien Meire was unconvincing at best in the press conference, claiming that she had received 20 applications within an hour of Peeters’ sacking but refusing to answer when asked whether managers with English league experience had been interviewed.

She also raised eyebrows by saying she “would like [Luzon] to be the next Sir Alex Ferguson” and later telling the Evening Standard that Charlton fans “must accept how owner Roland Duchâtelet runs the club”.

It’s not Luzon’s fault, but his appointment as the fourth head coach has unsurprisingly sparked further disillusionment with the state of the affairs at The Valley and, quite bluntly, the decision-making abilities – and manner – of Duchâtelet.

Bob Peeters’ spell in charge of the club came to an end after just one win in 12 games. While Peeters wasn’t exactly a disaster, his sacking only halfway through the season raises questions about his appointment in the first place in place of José Riga, who had steered the club to safety.

Fans are even more concerned about the identity of his replacement, and the way in which Luzon’s appointment was handled.

Viewed with rose-tinted spectacles, the out-of-sync nature of Meire’s statements with the events that followed may have been a communication breakdown – or, rather, confirmation as to who makes the decisions. But to many the pair appear disingenuous and completely removed from the views of Charlton supporters.

In last Saturday’s Valley Review, Meire had written: “It is important to stay calm and not get carried away by one rocky patch.”

Twenty-four hours later, with Peeters fired after narrowly losing a game in which the home side had 20 shots to Brighton’s 12, she was widely ridiculed.

Meire then promised that the club would search for a replacement to “plan and take charge for the long-term”. Yet just hours later, Luzon was announced as head coach.

Worrying - and telling about the way Duchâtelet handles his business - is that, with a contract of a mere 18 months, Luzon’s appointment is considered “long-term”.

Yes, 18 months is longer than the contracts handed to Peeters and José Riga put together. But hell, Pardew got an eight-year contract from Newcastle!

Not to say that was a good decision or that Mike Ashley is the model employer – he is one of the few owners in English football who disregards his club’s fans to the extent that Duchâtelet does. But the point is, how many other owners repeatedly give managers such short-term contracts?

How can fans be expected to be enthusiastic when, after years heralded as the model club, Charlton has swiftly become one of the most short-termist in English football, bringing in players and head coaches on loans or short-term contracts almost exclusively from “network” clubs?

While our needs as a club remain less important than a multi-millionaire’s opportunity to save a few hundred thousand quid, as Duchâtelet has done by employing someone already on the “network” payroll, it is hard to find a shred of optimism.

Most supporters consider Luzon’s appointment as just the latest miscalculation from a man responsible for selling – and failing to replace – Yann Kermorgant, widely considered our most important player, apparently for a measly £300k.

Kermorgant has since helped fire AFC Bournemouth to the top of the Championship (though there was more to his game than scoring), while the Addicks are the third-lowest scorers in the division.

Duchâtelet is the man who, despite Chris Powell being clear that there was no need for another right-back, forced Loïc Nego upon the club; the man who tried to ensure that Yohann Thuram-Ulien, possibly the worst goalkeeper to grace The Valley since we returned in 1992, would replace Ben Hamer as No 1.

Of the signings forced upon the club by the 68-year-old in January, just one – Astrid Ajdarević – positively impacted the first team.  And even Ajdarević was inconsistent and short of the pace and physical attributes needed in a Championship relegation fight. He by no means deserved a starting place each game.

It was by sticking with Powell’s signings that Riga got Charlton out of relegation trouble last spring – and presumably why Duchâtelet didn’t renew his contract.

Yes, Tal Ben Haim was signed from Liège, and he has acquitted himself well to the task since joining. But Ben Haim has more experience in English football than the other “network” recruits put together and is the exception that proves the rule: it is naïve to expect to build a stable Championship club around loan signings – and head coaches – with no experience in England.

It is through a mixture of youth and experience – and also commitment to the club, which any player on a three-month contract is unlikely to match – that Powell put together the record-breaking 2011/12 side.

The sacking of a popular manager - not that Peeters fits the bill in this regard as much as Powell or Riga - puts fans in a difficult position. Of course they want their team to win games.

Headline-writers across SE London and Kent will be licking their lips at the possibilities over the next few weeks: “Charlton risk Luzon fans after sacking” or “Luzon out: how Addicks have lost ground under Duchâtelet”

But, more seriously, the future looks bleak for fans. One of Luzon’s more bizarre answers, when asked about what he knew about the Championship, was: “Most of the time the stadium is full.” Despite aggressive ticket pricing, attendances at Charlton are well down on those of Powell’s debut season in the Championship two years ago, and they – and the club’s fortunes – show little sign of picking up while Duchâtelet remains at the helm.