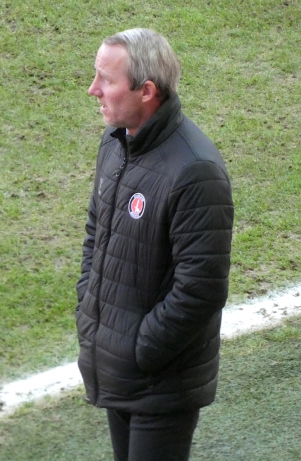 Lee Bowyer, who has resigned as Charlton manager

No matter how it finally came about, the sense that Lee Bowyer’s days as manager of Charlton were coming to an end has been pervasive in recent months. The home performances and results have been terrible since the start of December. Apart from one second-half flourish against AFC Wimbledon, the matches have been deadly dull.

It’s hard to know what impact the empty Valley might have had on that, but had these games played out in the same way in front of a crowd it’s very likely that emotions would have spilled into an unpleasant confrontation, if he’d even survived in the job this long.

In the end, owner Thomas Sandgaard didn’t pull the trigger and insists he wasn’t planning to do so. Nevertheless, Bowyer cannot have been confident that without a significant improvement before the end of the season he would have been trusted with another campaign. That uptick never looked likely. He was bound to jump at a chance of a job elsewhere, especially at Birmingham City, one of his former clubs still in the Championship.

In the event, Sandgaard has been spared the responsibility of making a decision, but this is still a moment that asks big questions of him as he decides Bowyer’s successor. The last thing Charlton need is a return to regular changes of manager.

As for Bowyer, he is able to leave with his dignity intact, which is no less than he deserves. Whatever has happened this season, he was the unlikely anchor who just about kept the club tethered to the real world through an era of off-the-pitch madness.

He won promotion in 2019 in spite of the ownership and demonstrated that notwithstanding all that has happened to Charlton since 2007, the most fundamental strength of the club – the fanbase – remains solid and ready to return.

He could not be blamed for the penny-pinching approach to last season or Lyle Taylor’s summer betrayal, which together brought relegation.

The way Bowyer conducted himself as manager largely belied the reputation that he brought with him and converted many of the cynics. He has added a layer of respect and affection to the regard he held as a feisty teenage midfield goalscorer.

If and when the Addicks come up against him as an opposing manager in future, he is likely to get the kind of reception previously afforded to Alan Curbishley and Chris Powell.

That’s not a bad position in which to leave, even if recent results mean that few will be very sorry that he has gone.