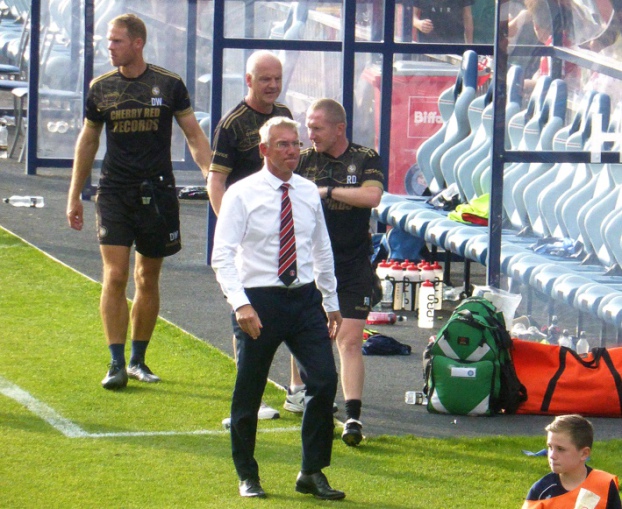 Dead man walking? A grim-faced Nigel Adkins leaves the touchline to jeers from visiting fans at the final whistle

As a Danish-American, Charlton owner Thomas Sandgaard may not be aware of the hold the late comedy duo Morecambe and Wise once had on the affections of the British public.

Given his interest in music, however, he might appreciate that iconic sketch from 1971 when Eric Morecambe, in full evening dress and allegedly standing in for violinist Yehudi Menuhin, plays a chaotic tune on a grand piano under the bemused eye of distinguished conductor Andre Previn. The punchline comes when the indignant Morecambe, challenged by Previn about his discordant performance, insists that he is indeed playing all the right notes but “not necessarily in the right order”.

The ebullient Sandgaard would no doubt enjoy the joke as much as the rest of us, but there was nothing for him to laugh about at Wycombe Wanderers yesterday as the Addicks drifted to their fifth defeat in seven League One matches and slipped to 23rd in the table in the process.

Perhaps, though, he might recognise something of Morecambe’s famous explanation in the show put on by manager Nigel Adkins. He too appears able to deploy many of the elements required to render a good tune, but it hardly takes an afficionado to recognise that what he has produced with them so far this season is unworthy of a professional stage.

For the trip to Adams Park, Adkins made six personnel changes from the starting line-up beaten at home by Cheltenham Town on their first-ever visit to The Valley a week earlier. He set the latest selection up in a new 3-4-3 formation, but the ensemble remained disturbingly off-key. This game marked exactly six months since Adkins' appointment. Unlike Morecambe, he is not a professional clown, despite his relentless positivity and cheerfulness. But it is beginning to look as if the 56-year-old’s days on stage will soon be behind him.

Quite simply, Charlton were awful at Wycombe, as they have been dreadful in nearly every game this season. They don't create, they don't have shots on target and they don't defend well. They were so bad that the home side felt able to introduce 39-year-old man mountain Adebayo Akinfenwa a quarter of an hour from the end. The burly forward is something of a folk hero at Adams Park and, assuming he is still capable of completing a circuit of the pitch, this appeared akin to a lap of honour.  But it was also a fair measure of how little threat Charlton posed by that point, newly two goals down and doing nothing to persuade anyone they were likely to retrieve anything from the game, including their own self-respect.

If their hopes seemed already dead, admittedly the corpse did twitch in the closing minutes, with Charlton’s own substitute Corey Blackett-Taylor finally demonstrating some appetite for the occasion. This minor flurry eventually yielded a 92nd-minute first goal for Sam Lavelle, converting a corner with a far-post header.

Of itself it was scant consolation for the diminished band of 1,322 travelling Addicks, although it might have been had another substitute, Josh Davison, not seen two chances kicked off the line in the last minutes. If anything, however, these moments only served to highlight what a pitiful performance it had been from the Addicks, who had created almost nothing in front of goal before that.

It was not this display in isolation but the fact that it has been that way since early August which accounts for the rising chorus of derision aimed at Adkins – who was jeered off - and the team.  The transfer window was a mess, but at the end of it all parties were convinced a squad had been assembled that could at least compete in League One. The players have the pedigree to do so, and yet they are not.

Charlton have only completed two matches since the transfer deadline, so perhaps judgement is premature, but most eye witnesses have already concluded that something is terribly wrong in the football set-up at The Valley. It shows itself in every performance, regardless of the names on the shirts. It is possibly significant that no one outside the club really knows who ultimately carries the can for the make-up of the squad, other than Sandgaard himself.

Technical director Ged Roddy was a useful lightning conductor for a time, caricatured as a wizard from Oz, pulling the strings from behind a Sparrows Lane curtain to open a path to the first team for his own teenage son, Jacob.

Now it is Adkins turn, and not unreasonably so. But the risk for Sandgaard is that even if he pulls the rug from under the manager’s feet, he has to be confident that will solve the problem. Otherwise, the fans may conclude that he is at the root of it.

For now, he continues to get the very substantial benefit of the doubt. Fans know that he wants the best for the club and, despite being based in Colorado most of the time, he is more accessible and willing to engage than predecessor Roland Duchatelet ever was. He is a likeable guy with a very credible business background and he has paid good money to rescue the club from the chaos of what went before. He says the right things and is well regarded.

Ultimately, however, football is always a results business. People don’t turn up every week to cheer an owner, with or without a guitar. The personal warmth towards Sandgaard won’t endure if there is a prolonged spell at the foot of League One, or worse.

On Tuesday night there will be 2,500 Addicks assembled around the contraption that passes for an away stand at Gillingham’s Priestfield – a fixture that is closer to home for many of us than even a match at The Valley.

It could be the ideal platform for a relaunch, but otherwise there is a big risk that it will prove a brutal experience for manager, players and owner alike. Adkins may well wish he had to leave the field via a different exit than the one adjacent to the visiting fans. The manager likes to walk and may soon be invited to do so, right out of the Charlton picture.

For Sandgaard, next Saturday's visit of Portsmouth marks the first anniversary of the completion of his courageous takeover.  It would be tragic if that was also the point at which some began to see him as the man sitting at the piano.

After all, everyone loved Eric too. 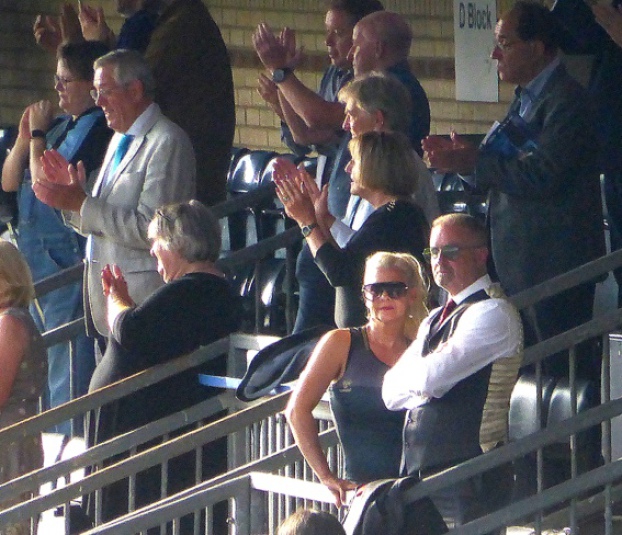 Nothing to cheer here: owner Thomas Sandgaard stands with arms folded as his Charlton team leave the field